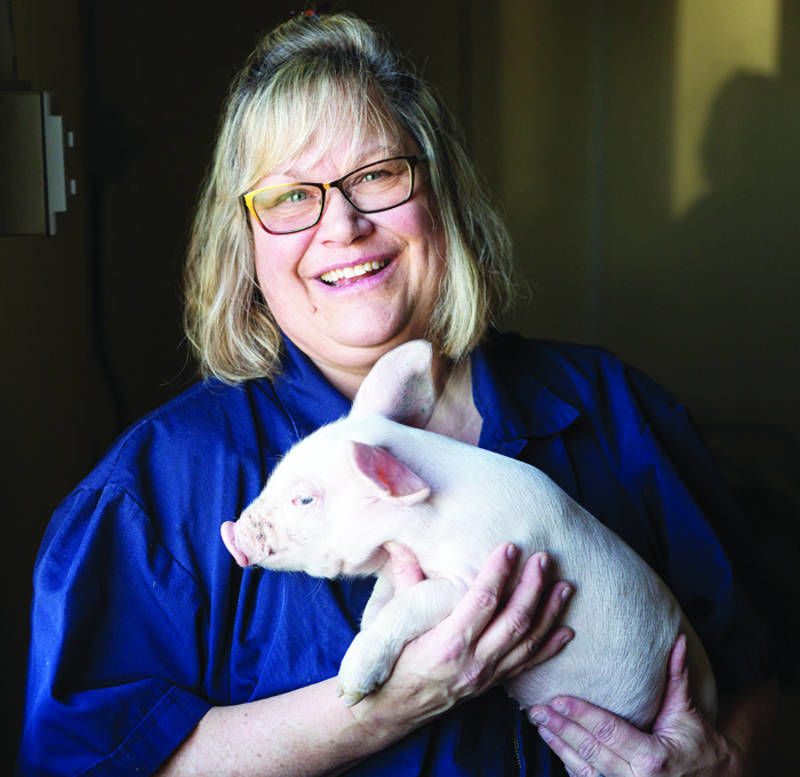 In every size and type of pig production system, health is the utmost concern. American pig farmers have learned the fine details of recognizing, treating, vaccinating against and avoiding familiar diseases in swine. What would happen in the event of a foreign animal disease outbreak?

Across the country, plans are being put in place to establish emergency foreign animal disease preparedness in livestock.  Currently, secure food supply plans have been developed for milk, poultry, beef and pork. The purpose of the secure supply plan is to provide livestock producers with a workable continuity of business plan should a foreign animal disease incident occur.

In the event of a foreign animal disease outbreak, livestock movement would be restricted. Preparation for such a catastrophe is the best way to ensure producers could continue to move animals off the farm and move products to market.

The secure supply plan also prepares producers for cooperating with animal health officials in the event of an outbreak. Hopefully, the plan would also provide consumers with confidence that their meat, milk and egg supply is safe.

Collaborating with the National Pork Board, industry and universities, state and federal officials are currently rolling out secure pork supply information to swine producers. In Minnesota, Dave Wright has accepted the task of coordinating the secure pork supply effort. Working in conjunction with the Minnesota Board of Animal Health, Wright is available to meet with producers, veterinarians and producer groups to help them learn how to participate in the program.

Wright has identified three components of the secure pork supply program and provided an overview to Minnesota Pork Congress participants in January.

The first component of the program is traceability and movement management. It’s been proven that restricting movement of animals reduces the spread of disease; but that benefit has to be balanced with the costs of interrupting business. In addition, there is a real threat to animal welfare when they are kept in close proximity to diseased animals.

A farm connected to a validated national premises identification number is a key component in helping officials determine disease control areas and potential movement of animals.

Swine farm personnel must also become familiar with the three most common swine foreign animal diseases: foot and mouth disease; classical swine fever (formerly known in the United States as hog cholera); and African swine fever. It should be noted these three diseases are not public health or food safety concerns. Meat will still be safe to eat.

However, these diseases are very contagious in swine, and each team member on the pig farm should be able to recognize clinical signs. Currently, swine producers are asked to keep a daily observation record of their pigs. Doing so will help provide timely documentation in the event of a disease outbreak. If suspicious signs are observed, farm personnel will be asked to collect oral and nasal swab samples to submit for testing. Any suspicions about pig health should be reported to a veterinarian immediately.

Today, more than 95 percent of swine premises use the national premises identification number. A number for every pig farm provides pinpoint accuracy to reduce disease spread. The number also provides a traceability system to the United States’ international trade partners.

Premises identification numbers are a key component of the Pork Quality Assurance Plus (PQA+) site assessment. Many packers require a PQA+ site assessment as a condition of sale. Since January 2015, all sows and boars sold into the food chain must have an ear tag containing the farm’s premises identification number. The numbers are also required by many major swine shows and exhibitions.

To obtain a premises identification number, producers can contact the Minnesota Board of Animal Health at  www.bah.state.mn.us/register-your-premises or call (651) 201-6816.

Jim Lowe and graduate student Ben Blair at the University of Illinois studied cull sow movement prior to harvest. They learned that cull sows often travel across the country for a week before they actually reach a harvest plant. Culls are mixed and re-sorted by size and leanness, and in Lowe’s study, crossed an average of 3.5 state lines. Lowe and Blair found that sows often left the farm free of disease pathogens, but arrived at the harvest plant pathogen positive — many times with disease pathogens from other species.

Producers are encouraged to use their premises identification number on every communication related to their swine operation. National Pork Board provides instructions for implementing the number to a bar code which can be printed onto labels and attached to paperwork and samples. All veterinary diagnostic labs recognize the bar codes.

To convert a farm’s premises identification number to a barcode, go to www.pork.org/food-safety/swine-id.

A team from the University of Minnesota’s Department of Veterinary Population Medicine took a close look at premises identification number information and found two types of accuracy problems. Numbers had been found to be linked to a site with incorrect address or longitude and latitude coordinates. The number must be connected to the actual physical address where the animals are located for emergency response activities. Also, producers with more than one farm or barns on several locations need to get a separate number for each site. In the case of a disease outbreak, if multiple barns or farms are connected to one number, all of the facilities would be designated as infected — even if only one actually was.

Diane DeWitte is an Extension Educator specializing in swine for the University of Minnesota Extension. Her e-mail address is stouf002@umn.edu