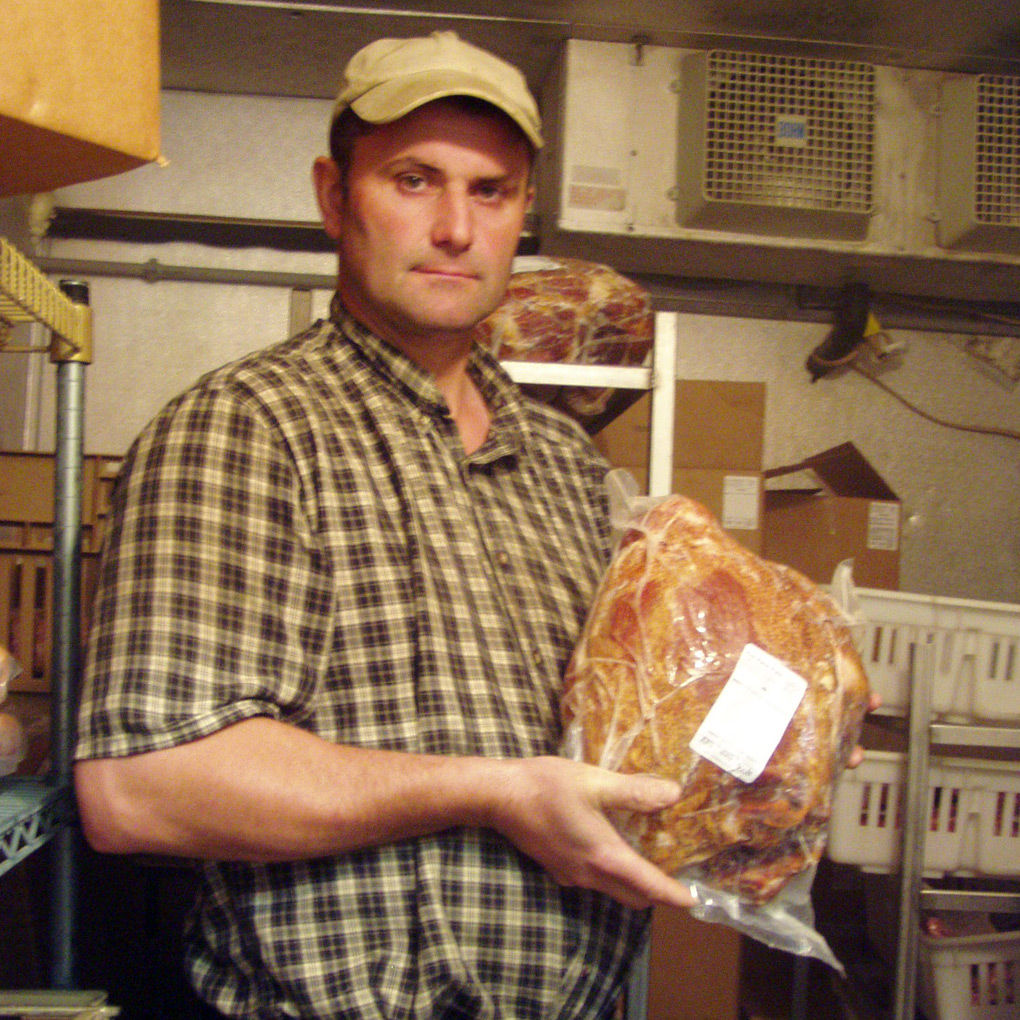 Laurence Fox controls costs by raising, grinding and mixing his own feed. He hopes to create customer loyalty by consistently producing a high-quality product.

Laurence Fox controls costs by raising, grinding and mixing his own feed. He hopes to create customer loyalty by consistently producing a high-quality product.

BROWERVILLE, Minn. — Laurence and Arlene Fox’s daughter had her wedding reception on the family farm near here in July.

“We barbecued 500 pork chops from our hogs and dug potatoes from our garden,” Laurence said. “We had a few chops left over, but it’s better to have too many than not enough.”

All those chops came from pork raised and processed on the farm. The Fox farm, known as Fox Farm Pork, is the site of an equal-to U.S. Department of Agriculture inspected processing plant as well as a farrow-to-finish hog operation. In the facility Fox Farm Pork prepares a line of fresh pork cuts, smoked cuts, fresh ground sausage, fresh brats, and smoked sausage.

When Laurence talks about freshness he gets a little excited.

You can’t get much fresher than that,” he said. “The meat is fresh and tasty so we use our sausage recipes and curing to accent the flavor of the meat. Not to hide it.”

Freshness and flavor are critical to the products that Laurence is proud of, and so are the natural ingredients Fox Farm Pork uses in their pork products.

“All our products are minimally processed without fillers and ingredients such as monosodium glutamate,” he said. “In our smoked products we use all-natural cures. These are based on the naturally occurring nitrites in celery powder. Celery powder eliminates the need for sodium nitrates.”

The pork processing is done in a refurbished chicken processing facility that was on the farm when the Fox family moved there in 2006. The meat processing area used by the chicken processors only needed a smoker, sausage making equipment, and some additional equipment to make it ready to process red meat.

“We would never have been able to do this if a lot of things hadn’t already been in place when we came,” Laurence said.

The big change made by the Fox family was the construction of a small and efficient kill floor for hogs as well as cattle. Laurence can work shoulder-to-shoulder with two sons and an inspector as they kill, eviscerate, and skin a hog in minutes. He’s particularly proud of the humane kill chute that he designed himself.

“When the hog comes into the chute it lays gently down on its side and doesn’t even know what happens,” he said.

Killing on-farm also minimizes stress in animals. Animals that are killed humanely and haven’t been stressed by spending hours in a truck provide a better quality meat, Laurence said.

They are excellent mothers, according to Laurence. The farm uses Chester White boars.

After birth little pigs are allowed to nurse until they are ready to move to feed on their own. Then they are raised and finished in four hoop houses with deep bedded straw. Laurence said that the deep straw, with the composting manure pack under it, keeps the hogs warm through the coldest weather.

“They burrow down into the straw and you can’t even see them,” he said. “Sometimes you see just their noses or eyes.”

Fox Farm Pork raises some of its hogs for Niman Ranch and has received a number of quality awards from the company. In 2013, the farm was rated No. 5 out of 161 farmers for pork quality. As a basic standard, Niman Ranch requires that all hogs be raised either on pasture or dry bedding and be protected from the extremes of heat and cold. The hogs can never have been treated with antibiotics or hormones and must have been fed on an exclusively vegetarian diet.

The Fox Family is proud that their pork is rated among the best by a national company with high standards. But Laurence’s plan is to eventually process all of his pork and sell it directly to consumers, stores and restaurants.

“We do some custom processing now but our long-term goal is to use our plant to process all of our pork here on the farm,” he said. “We finish around 1,000 hogs a year.”

“There are always swings in the market, but by producing a quality product I am creating loyalty with my customers,” he said. “They won’t abandon me for a cheaper product.”

Laurence also controls cost by raising, grinding, and mixing his own feed. He is particularly pleased with his less expensive, high-performing, non-genetically modified corn.

“The co-op asked us to do some side-by-side trials,” he said. “Our non-GMO variety outperformed all those expensive GMO varieties by 20 bushels. Besides, our hogs are growing faster on it than they were on the GMO varieties.”

By using non-GMO corn, Laurence says he is saving on seed cost, getting a slightly better yield, and better growth as well. To get fertility to crops Laurence composts his animals’ manure and bedding.

Unlike livestock farmers that ship their animals to slaughter, Laurence also is able to keep the nutrients from the offal on the farm. He composts it with the manure and bedding.

“It makes a very hot compost that has no odor,” he said.