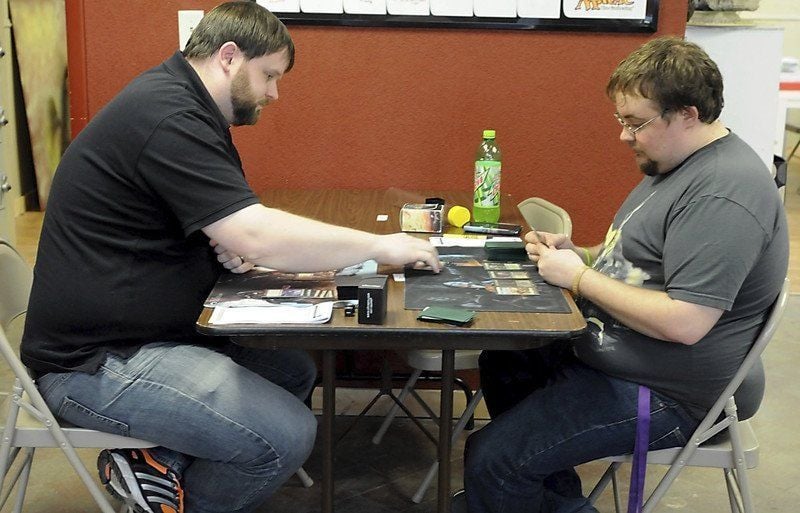 Derek Johnson, left, and A.J. Praxl do battle during a Magic: The Gathering tournament at the Dork Den in Mankato. Photo by Pat Christman 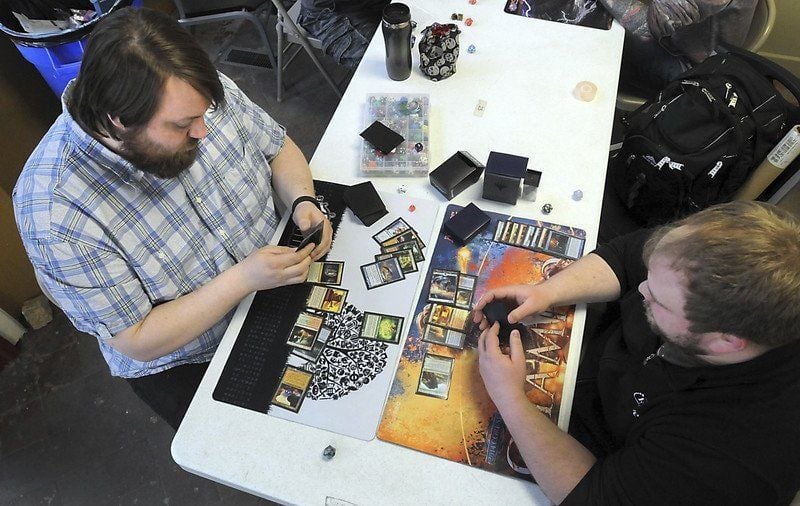 Photo by Pat ChristmanDork Den co-owner Greg Fenske, left, and Mitch Tetzloff play a round of Magic: The Gathering during a tournament in the store’s game room. 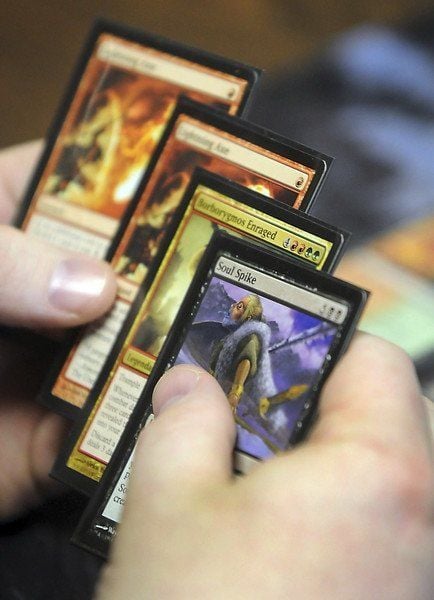 Photo by Pat ChristmanA good, or bad, shuffle can make all the difference in the game.

Derek Johnson, left, and A.J. Praxl do battle during a Magic: The Gathering tournament at the Dork Den in Mankato. Photo by Pat Christman

Photo by Pat ChristmanDork Den co-owner Greg Fenske, left, and Mitch Tetzloff play a round of Magic: The Gathering during a tournament in the store’s game room.

Photo by Pat ChristmanA good, or bad, shuffle can make all the difference in the game.

There is magic in the air both figuratively and literally Tuesday nights at The Dork Den in downtown Mankato as groups of dedicated players gather, laugh and do combat with the Magic: The Gathering collectible card game.

As you enter the gaming room of the shop you can tell that this is where the Magic happens. The room has multiple tables set up for gaming of all types. Walls are decorated with posters of powerful characters announcing the latest expansions to Magic: The Gathering. Calendars announce the different tournaments taking place such Tuesday Night Modern, Friday Night Standard and Saturday Drafts. Each night is a different style of tournament with different rules, and all attract fans ready to compete in friendly competition.

“The NEA (National Educator’s Association) has the four C’s and Magic hits them all,” Greg Fenske, one of the owners of The Dork Den, said while talking about the appeal of the game. “It encourages communication and collaboration because you have to find players to play with and if you go to tournaments you meet new people. It covers critical thinking because of the risk/reward benefits when deciding plays and what goes in the deck. And creativity in that you can make decks to fit your play style or build a deck around a theme.”

In the hour leading up to the start of the tournament, participants gather and carry out their own pre-tournament rituals. For many this includes buying new cards, and trying to find that one card that could make the difference in winning or losing. Others gather around showing off their collections and offering trades with other players. Those who are confident in their deck play causal games with others as they wait for the tournament to start.

Louis Wingen of Good Thunder was one of the earliest attendants to this night’s event. As he waits he is searching for a shaman card that he needs to improve the deck he is building. After buying cards he offers his binder full of spare cards to another attendant to see if there is anything the two of them want to trade. With the randomness that come with buying blind packs of cards trading is a good way to find that diamond in the rough you’re looking for. Wingen has been playing Magic: The Gathering for about three years. He was drawn to the game by the amount of strategy that goes into it, and collecting the right cards is part of that strategy.

“You have to plan and anticipate everything in Magic,” Wingen said. “Tonight I am playing a green-blue aggro deck. It is a quick and fast deck that uses the infect mechanic.”

How the game works

Magic cards are broken up into five different colors: red, blue, green, white and black. Each has its own strategy, and by combining multiple colors into a single deck you can cover one color’s weaknesses with the another. Decks are made up of a minimum of 60 cards made up of “land” and “spells.” Land cards generate resources for your spells. Spells can do a variety of things such as summon powerful creatures to be your attackers and defenders, or use powerful effects to do anything from heal players to kill creatures.

Jake Fitzlaff of Mankato used to be a regular at the tournaments. He was returning after a six-month break from the tournament scene. He was playing with a blue-red deck that used a bait-and-switch strategy to keep his opponent off guard. Like Wingen, strategy is what keeps Fitzlaff playing.

“I grew up in the Pokemon card craze. But I actually played the game. Magic offers a deeper strategy, and I enjoy the face to face quality,” Fitzlaff said.

Once the list with the first round match-ups is posted the tournament is on. The room is filled with the sounds of greetings and card shuffling and the tone becomes much more serious. Conversations shift from friendly banter to declaring attacks and defenders. There are moments when the only noise in The Dork Den is the faint sounds bleeding over from gamers in the back side of the game room, and the shoppers in the store.

As with any game, disputes do arise among players about rules. Most of these are handled between players as they talk out the rules of the cards and come up with a mutual ruling. Once over the course of the tournament a dispute did require a judge’s ruling. As store owner, Fenske steps in to handle such disputes. Judging is fully volunteer based and requires attending a judge conference to get a full understanding of the rules, which are extensive when you get down to the fine print. Fenske noted the full rule book is approximately 900 pages long, but many of those fine print rules are not necessary for the average player to know.

During a game of Magic the goal is to use your spells to reduce your opponents “life points” from 20 to 0. On each turn a player gets to play one land card which they can use to get “mana” to activate their spells. Weaker abilities cost a small amount of mana and more powerful spells cost more. This is were a part of the strategy of the game comes into play. Some decks focus on many small mana spells to get more creatures and spells out on the board. Other decks focus on canceling the spells of their opponents while they save up mana for large game-ending spells and combinations of spells. Fitzlaff was able to win his first round thanks to the deck he built.

“My deck has a straight path to victory, the other cards help to get me on that path,” Fitzlaff said. “It’s about reading your opponent and reading the flow of the game.”

A game of skill and luck

No matter how powerful of a deck you create, luck still plays a large part in the game. Kyle Schreiner of Cleveland had placed in a qualifying tournament that won him a plane ticket to Dublin, Ireland for the Magic: The Gathering Pro-Tour. During that tour he made it to the second day of the three day tournament. Tonight he has yet to win a round.

“Luck is a factor, but you can make a deck full of commons and uncommon card,” Schreiner said. “A deck filled with mostly commons recently won a $5,000 tournament.”

Schreiner was talking about the collectible part of Magic: The Gathering. Cards are available in starter decks, pre-constructed decks or booster packs. Each comes with a different number of cards of different rarity. Common and uncommon cards are the cheapest and easiest to attain while rare and mythic rares are the hardest to come by and end up costing the most.

“You don’t have to put all your money into it, but you will,” Schreiner said. Of those in attendance at the tournament they spend an average of about $100 a month on cards and tournaments.

As the night rolls to an end and people finish their rounds, they gather around and watch the other players finish their matches and talk about the moments of the game that were exciting and moments when they should have made a different play. At the end of the night Wingen ended the tournament of four rounds with two wins and two loses. Fitzlaff managed to take his blue/red deck all the way to the top to end tournament undefeated. For his victory he received 8 booster packs of Magic: The Gathering cards and approximately $24 in store credit. His entry fee for the Tuesday night tournament was $3.

“It feels good. Friendly competition always feels good whether you win or lose.” Fitzlaff said. “There is a stigma attached to nerd culture. Although it’s becoming main stream thanks to YouTube and the Internet. If it all interests you, try it. About about 97 percent of us are good people. From the outside looking in it might look hard to penetrate, but everyone is super nice. I come because its 60-percent playing a game I like and 40 percent hanging out with friends.”

“If you’re looking to start from scratch, download the Duels of the Planeswalkers video game on PlayStation, Xbox or PC. They release a new version once a year and it gives you a sense of how the game works,” Schreiner said.

Where: The Dork Den

Cost: Admission ranges from free to $10 and you’ll need to bring or buy your own deck of Magic: The Gathering cards. Entry fee goes towards prizes for winners.