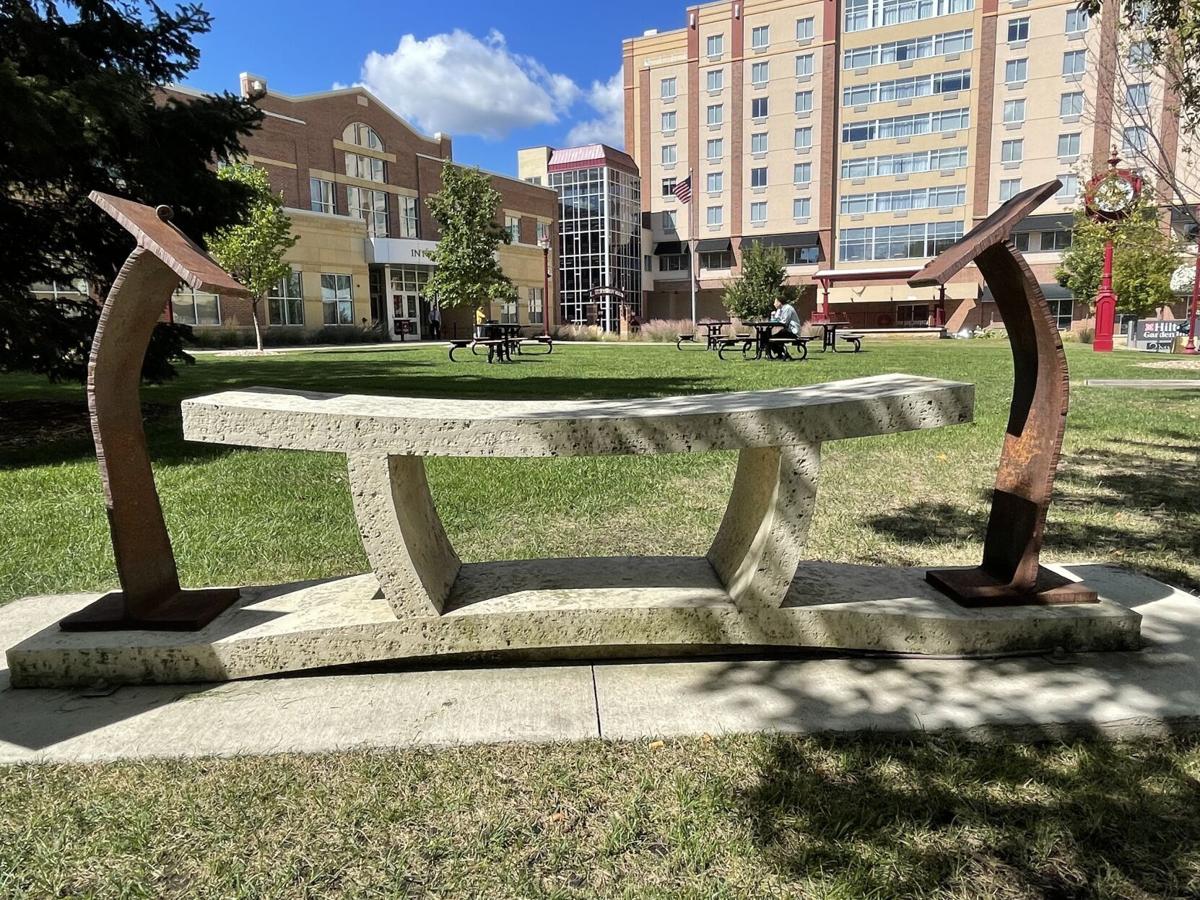 Artist Greg Mueller finished the 9/11 commemorative bench in 2014 after the Port Authority of New York and New Jersey began a program in 2010 to disperse 2,600 artifacts from the attacks. 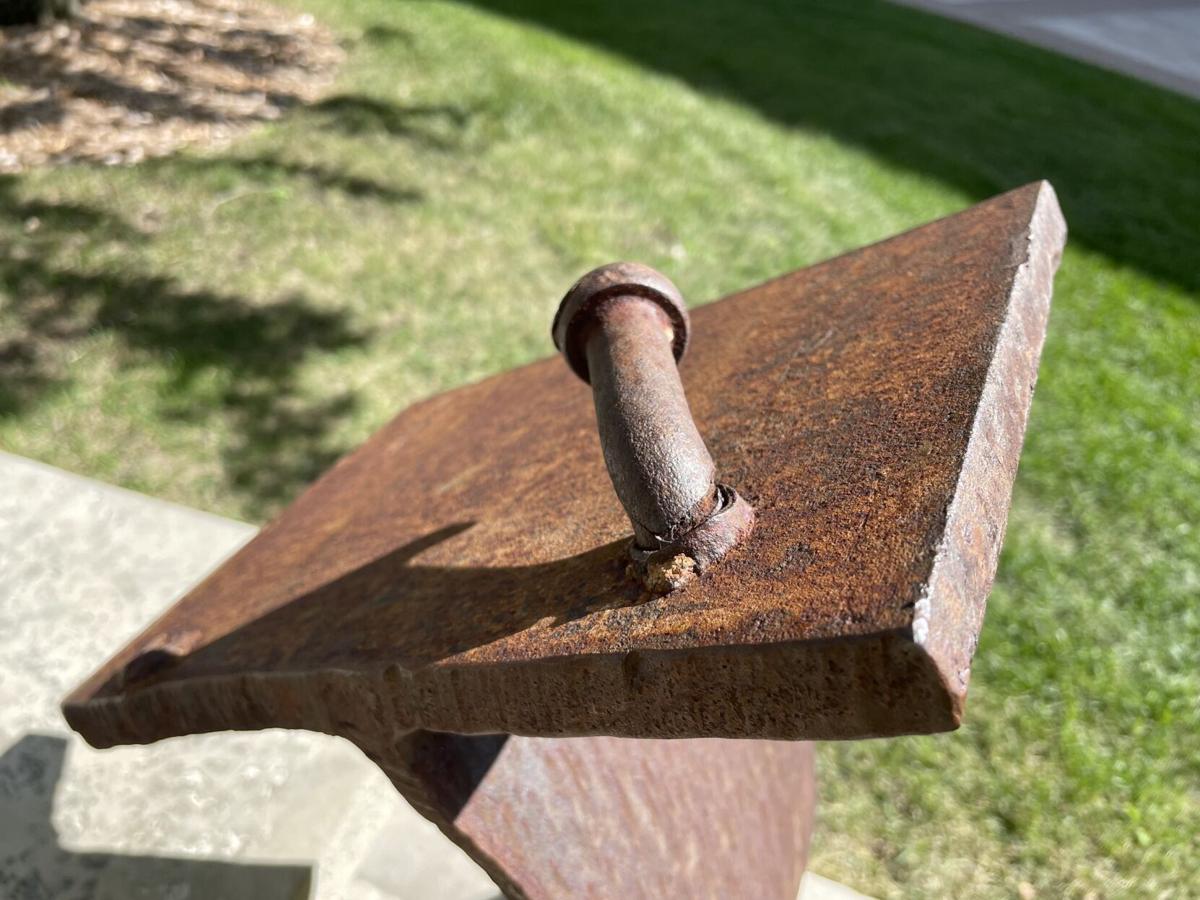 In building the bench, Greg Mueller largely left the bent steel beams untouched to preserve the feeling of rawness they impart.

In downtown Mankato there are two fragments of scarred, misshapen steel taken from the rubble leftover after terrorists crashed planes into the World Trade Center two decades ago. Scorched by fire, for seven years now the steel has served a different purpose: to aid in quiet reflection.

Mankato-born artist Greg Mueller first saw the bent beams when he received the steel from the Port Authority of New York and New Jersey, which had harbored pieces of debris for nine years before opening its collection to artists in 2010. Only artists with studio credentials and a written vision were eligible, and at the time Mueller worked as an apprentice at Gustavus Adolphus College.

His early impression of the beams, he said, was how graceful they looked. The gentle curves of the metal were wrought by aggression but could embody a way of thinking that aimed to avoid more violence.

“I started to look at the idea of it becoming a reflective place,” said Mueller, 55.

That place would be a bench, he decided. Mankato’s Vetter Stone made Mueller a custom slab of curved Kasota limestone, and he fashioned a seat that mirrors the bends of the beams.

He worked on the project for a year or so and by 2014, the bench had become part of the city’s downtown walking art tour with the name “G-0048." The label is the item number assigned to the beams while they were stored in John F. Kennedy International Airport with thousands of other artifacts.

The sculptures on display each year are all available for purchase. Before the tour had ended, the tourism organization City Center Partnership sought to buy the sculpture and retain it for the city permanently.

That’s where Jeff Thom, CEO of the aptly named All American Foods manufacturing business in Mankato, stepped in.

“When I first saw it, it just … caused a lot of reflection, remembering the men and women and children who lost their lives that day,” he said.

Thom, 59, made the call days before the 9/11 anniversary that year to buy the sculpture for $10,000 and donate it to the city. The director of the City Center Partnership at the time described herself as “shocked and ecstatic.”

The bench now sits beneath a maple tree in a courtyard on the eastern corner of Civic Center Plaza. When Thom was downtown recently at a festival, he noticed a group of children sitting on the lawn around the bench, parents standing nearby. He said even freedom that simple makes the purchase worthwhile.

Visiting the bench he thinks of the “heroes” on that day: Firefighters running into burning, crumbling buildings. The passengers on United Flight 93 who revolted against hijackers, disrupting a plane likely heading for the White House or U.S. Capitol and forcing a landing in a Pennsylvania field. All 44 people aboard died, including Minnesota native Tom Burnett, who led the effort to thwart the hijackers' plan.

And Thom thinks of what the warped steel of the commemorative bench endured. If that’s what pieces of metal went through, he said, imagine the experiences of humans with fear and feelings and loved ones.

“The intent was .. we all need to regularly reflect,” he said. “I don't think that’s bad; I think it's good. We should never forget those heroes in our lives. To me, if that bench in some way helps do that, then its purpose was accomplished.”

Mueller has always wanted the bench to lend permanence to the story of 9/11.

He said he is inspired when working with salvaged or reclaimed raw materials. The beams shouldn’t be stowed away in some warehouse, he reasons. People ought to see them and know their story.

By the end of the Port Authority’s program in August 2016, more than 2,600 pieces of twisted steel and other artifacts from the attacks had been donated, according to a press release. Fragments of the deadly day can be found in communities in all 50 states as well as 10 foreign nations.

Though Mueller now lives in Lutsen, on the north shore of Lake Superior, people still send him photos of the bench. Such casual viewing is why he prefers building sculptures for public spaces in between buildings, where people might walk by profound creations on a daily basis and feel a small sense of wonder.

Mueller can still imagine the scarred, jagged edges of the beams. He remembers thinking steel isn’t supposed to bend that way, especially not steel used to stabilize a skyscraper.

“I didn’t manipulate much in any way,” he said. “All the cuts and saw marks they used to procure it from the site I kind of left raw. You feel that rawness right away.”

Asked if the sculpture’s theme of reflection was related to the famous American motto “Never Forget,” Mueller was ambivalent. To him, the saying feels too militaristic.

He understands there are necessary occasions for military action, he said. But at the final stage of a 20-year war in Afghanistan launched because of the attacks, he wants people to sit on the bench and look not only outward at cultural values but inward.

“To me it's more about growing reflectively and gaining wisdom, and taking a deep look at cultural differences and social differences,” he said.