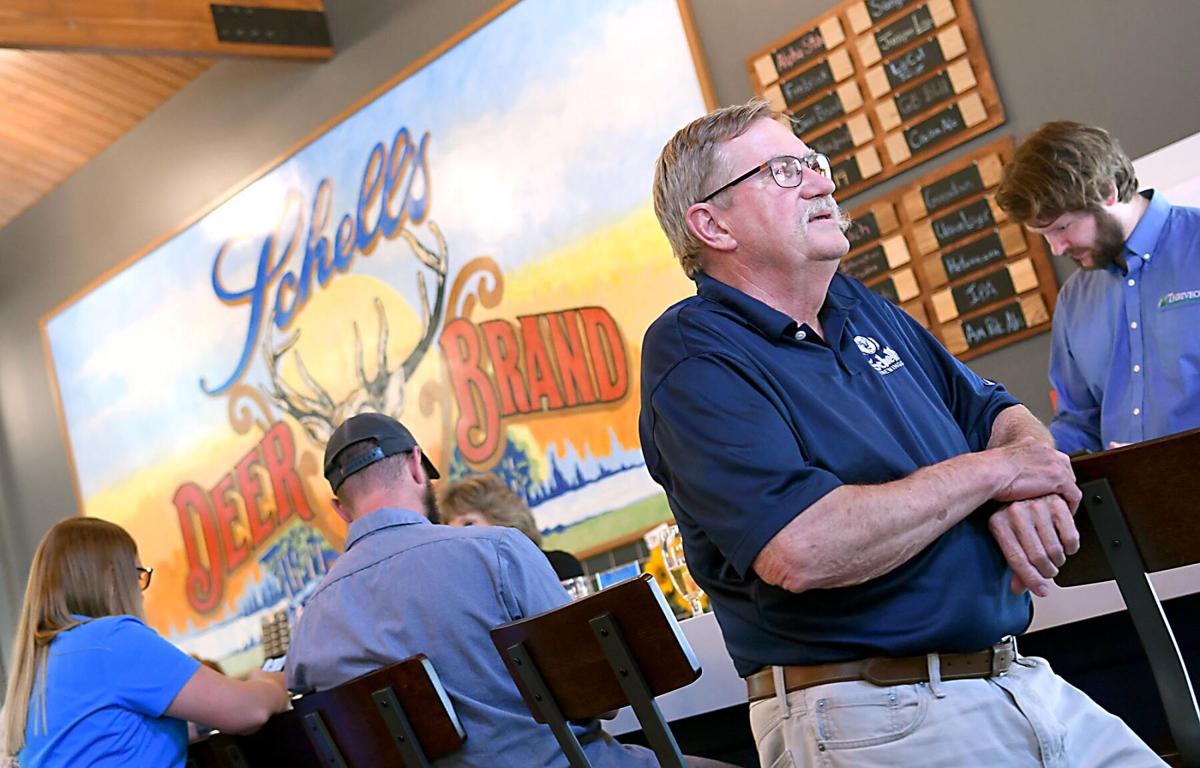 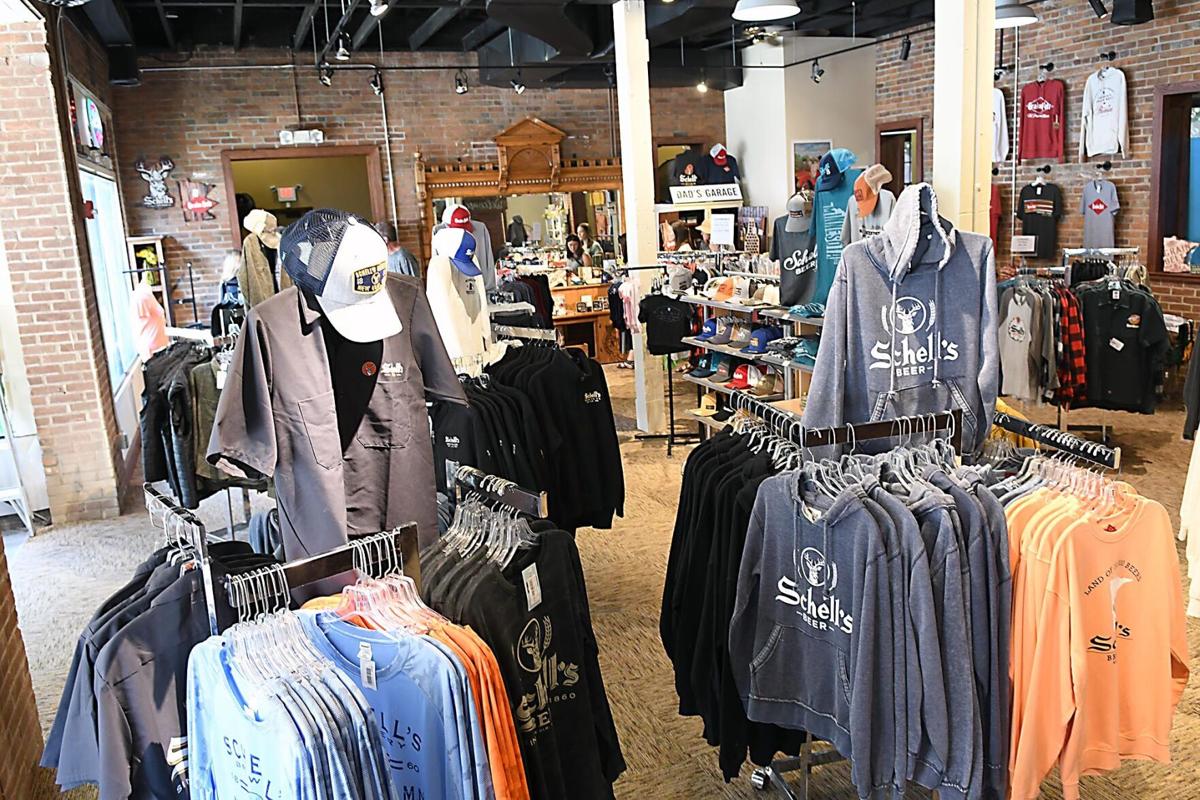 The gift shop has moved across the hallway to a space formerly occupied by a portion of the brewery’s museum. 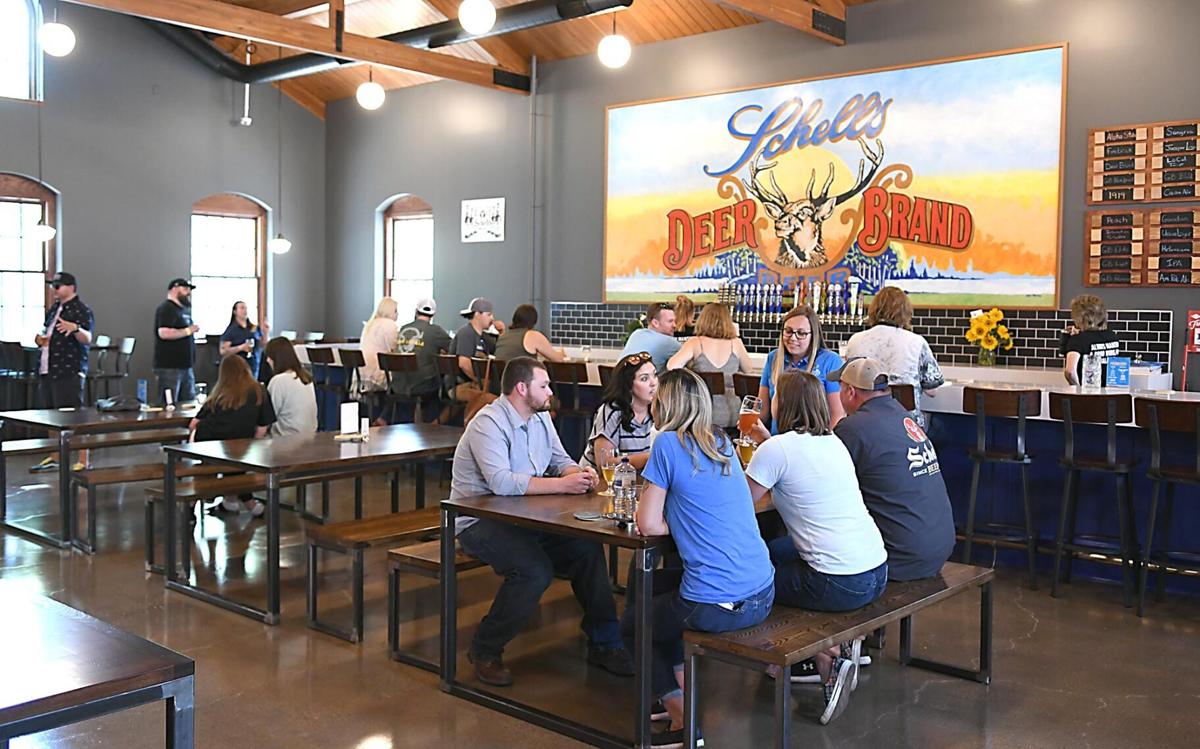 Ruth Blashack taps a beer Thursday for visitors at Schell’s Brewery’s new taproom. The brewery recently renovated the visitors center to accommodate the taproom, which will sell a variety of Schell’s and Grain Belt beers and sours.

Schell’s Brewery has opened a new taproom in its renovated visitors center that unlike its former lower-level taproom will sell a variety of Schell’s, Grain Belt and sour beers.

The New Ulm brewery’s new taproom, which debuts Friday and will be open seven days a week, is on the main level of the visitors center, where the gift shop used to be.

The large space with a vaulted wood ceiling opens up to a long deck that overlooks the Cottonwood River valley. Behind the bar is a large mural painted by Billy Thomas, who designed many of Schell’s T-shirts and painted other murals on the brewery grounds.

“The deck is really cool — you can overlook the valley,” said Ted Marti, president of Schell’s.

The gift shop has been moved to a smaller space on the other side of the main floor, next to the Schell’s museum.

Opening a retail taproom was driven by Ted and Jodi Marti’s sons. Last year, as the brewery turned 160, Ted and Jodi turned over daily operations to their three sons, Jace, Kyle and Franz.

Ted chose not to sell beer out of the old taproom in deference to the New Ulm bars and restaurants that Schell’s supplies, but said the new taproom model represents a generational and business model change.

“I never wanted to compete with the downtown bars, but the industry has changed,” he said.

The brewery opened in 1860 and is now operated by the fifth and sixth generation descendants of August Schell. Schell’s became the largest brewery in Minnesota in 2002 after it bought the rights to Grain Belt beer. They also operate the Starkeller in New Ulm, which brews and sells sour beers.

Schell’s was battered by the pandemic. As bars and restaurants closed and saw limited indoor business, keg beer sales plummeted. Meanwhile, a growing number of small craft brewers have brought more competition for shelf space in liquor stores and more competition for tap lines in bars.

“We did see good support for our main brands, they were affected the least,” Marti said. “Things are getting better. Food places seem to be doing good, but drinking places are still down. People get different habits.”

Marti said it’s also tough to keep up with the fast pace of change in people’s tastes. “It’s hard when a brand lasts a year or two and then you have to move on. People are big on one thing and then they move on to something else, and you’re stuck with all the packaging.”

And he said products like their hard seltzers keep seeing more and more competition.

But he said it feels good to have people coming to the brewery grounds again. Schell’s has resumed tours and has music every Sunday in the outdoor beer garden.

“The beer garden has been busy. People just want to get out again.”

Brewery tours are also back: