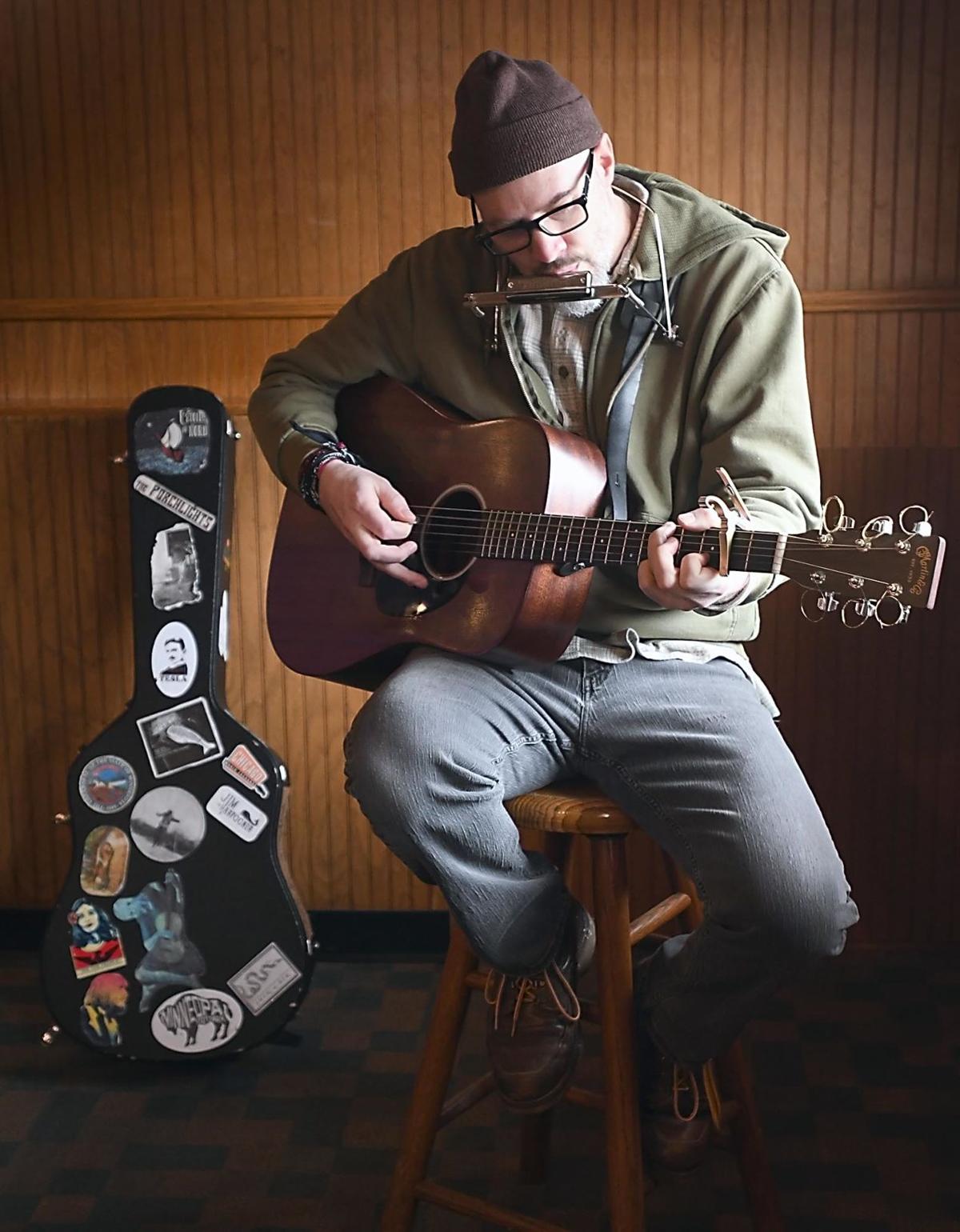 Nate LeBoutillier (aka Nate Boots) has been performing in the Mankato/North Mankato area for a decade. Later this year, he'll release his latest solo album "Wherever You May Roam." 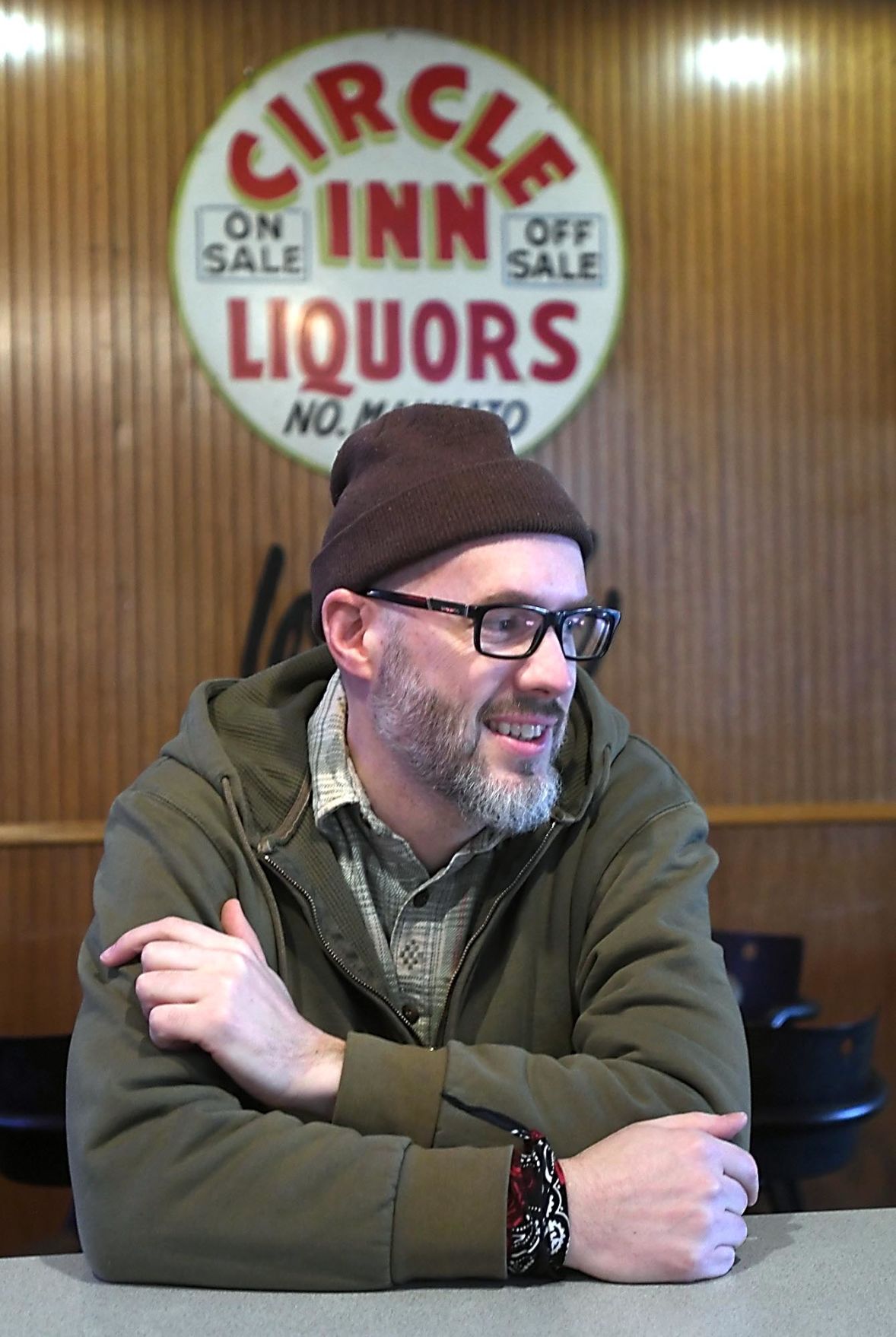 Nate Boots performs at The Circle Inn regularly, and even has the lyrics for his song, "Belgrade Avenue Blues" posted in the establishment.

Nate LeBoutillier (aka Nate Boots) has been performing in the Mankato/North Mankato area for a decade. Later this year, he'll release his latest solo album "Wherever You May Roam."

Nate Boots performs at The Circle Inn regularly, and even has the lyrics for his song, "Belgrade Avenue Blues" posted in the establishment.

In the late 1800s, Nate LeBoutillier’s great grandfather, who was from Norway, found a nice little home away from home in Minnesota.

“He would travel to America, they was offering up free land, and it’s just a sort of dream appeal to a good hardworking man,” LeBoutillier (AKA Nate Boots) sings in the song he wrote about his great gramps, “Prairie Below the Pine.”

And then, after that first line, he unexpectedly begins to yodel.

“My mom, my grandpa’s daughter, said that he (great grandfather) was very shy, but he would yodel in the barn and he was milking cows,” Boots said.

As a joke, Boots' mom had given him a CD, “U 2 Can Yodel.” A couple of years passed without playing the CD, until one day, his daughter, Violette, popped it in on a drive.

“We had a good laugh,” he said. “Then we kind of started to do it and it’s, like, fun. So I added a little yodeling part in honor of my grandpa into that song, too.”

As any good writer, Boots enjoys stories and sharing them with others, and what better place to start than with your own family?

“He’s the guy who kind of set up the land and started it up,” Boots said. “I like to think that if he wouldn’t have, I wouldn’t be here. Life wouldn’t have descended that way from the family tree.”

The story came to life through the form of music for Boots by piecing together family stories about his great grandfather told over the years, including memories that Boots’ grandfather took from his father.

His grandfather died in December 2018.

“He was actually a big, big part of why I do some of this music, or started to do it,” he said.

Just a few years ago, Boots had performed at his uncle’s wedding. He performed “I Can’t Help Falling In Love With You” during the ceremony. Boots recalls the moment filled with pressure.

It was a wedding and at a church, and the last thing you want to do is ruin someone’s wedding.

The piece was well prepared, he said, and he had felt the song went well. After the performance, Boots’ grandfather pulled him aside in the church basement.

“My grandpa was very quiet and stoic, an old Norwegian guy, and he said ‘Have you ever done this sort of thing before?’ I said ‘Not really,’  and he said, ‘You should think about it,’ and that’s all he said.”

Those five words meant a lot to Boots, and he gives him credit for having nudged him into music.

And so he did.

Boots (which by the way, is a nickname passed along his family) has continued his music through bands like The Porchlights, Jim the Harpooner and lately, Nate Boots and the High Horses.

It's likely you've already seen Boots performing somewhere around the area. He performs around town with his harmonica and guitar at the Mankato Brewery or the Wine Cafe, The Lucky Lure in Madison Lake, or perhaps The Circle Inn in lower North Mankato where you can sing along to Boots’ song “Belgrade Avenue Blues.”

The bar’s owner, Jeni Bobholz, actually has the lyrics hanging up on the wall as the bar’s all time favorite, although sad, song.

“I met her and she's a very friendly woman, and she would be singing along. She started to memorize some of the songs,” Boots said. “I remember one gig at The Circle and I was about to sing a part of a song and I couldn't for the life of me remember what the line was. I looked at Barb and she had the line. I followed her."

Recently, in between his time teaching English comp and fiction writing at Minnesota State, he has been recording his latest album “Wherever You May Roam” with Scott Helgerson in North Mankato. His new album is set to be released around April.

The album name comes from his song "Home," which explores the idea of a home. Rather than a house or town, home is a person. The song was featured in New Ulm's music video series, Rathaus Sessions. He performed the song with his favorite musicians: his kids.

Gordie (9) on the drums, Archie (11) playing the harmonica and Violette (13) harmonizing along with Boots. Together, they're The Respectables.

"We play a lot in the house and that's some of the most rewarding kind of music that I play, actually," he said.

Support local music! Check out Nate Boots Kickstarter to fund his latest album "Wherever You May Roam," to be released soon at http://kck.st/3141VJ4.