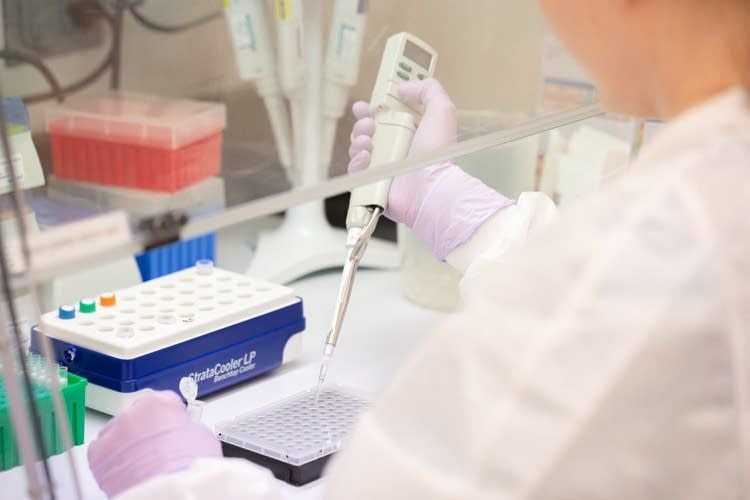 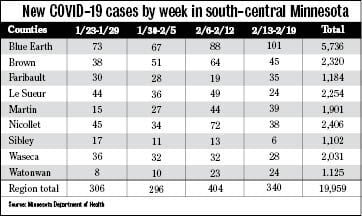 The Free Press and MPR News

The nine counties combined for 340 newly confirmed cases between Feb. 13-19, according to the Minnesota Department of Health. It was a 15.8% drop from the previous week, which had 404 new cases.

This week’s case count was higher than weeks in late January and early February, while remaining well below the totals seen in November and December.

The weekly total includes 33 new cases confirmed Friday, a lower tally than the previous two days. There were also no new COVID deaths confirmed in the region, although eight deaths were confirmed statewide.

Fewer cases in six of the nine area counties fueled the region’s overall drop this week. Nicollet and Le Sueur counties had the most pronounced dips.

The other counties with fewer cases this week were Brown, Waseca, Sibley and Martin.

Blue Earth County, Watonwan and Faribault counties all had more cases this week compared to last week. Faribault County had the biggest rise by percentage, jumping from 19 to 35 new cases.

The most new cases by far this week, meanwhile, were in Blue Earth County. It went from 88 to 101 new cases.

Watonwan County’s rise was minimal in comparison. Its 24 new cases this week were one more than last week.

For newly confirmed cases Friday, eight of the nine counties had at least one. Sibley County was the only one without any confirmed cases, but it had 10 probable cases, indicating residents had positive antigen tests rather than PCR tests.

The full list of newly confirmed cases by county includes:

It was a second consecutive day of hospitalizations below 300, the first time that’s happened since the fall; 59 people needed intensive care.

The state has recorded 477,287 total confirmed or probable cases so far in the pandemic, including 1,001 reported Friday. About 97% of Minnesotans known to be infected with COVID in the pandemic have recovered to the point they no longer need to be isolated.

The trends offer reasons to feel encouraged, enough so that Gov. Tim Walz on Wednesday proclaimed, “We’re on our way to ending the pandemic” as he OK’d reopening secondary schools starting Monday.

“We’re beating this thing,” he said.

State health officials, however, continue to monitor new virus strains circulating in the United States, which may be more contagious. Walz and other officials have warned that they could lead to an increase in cases.