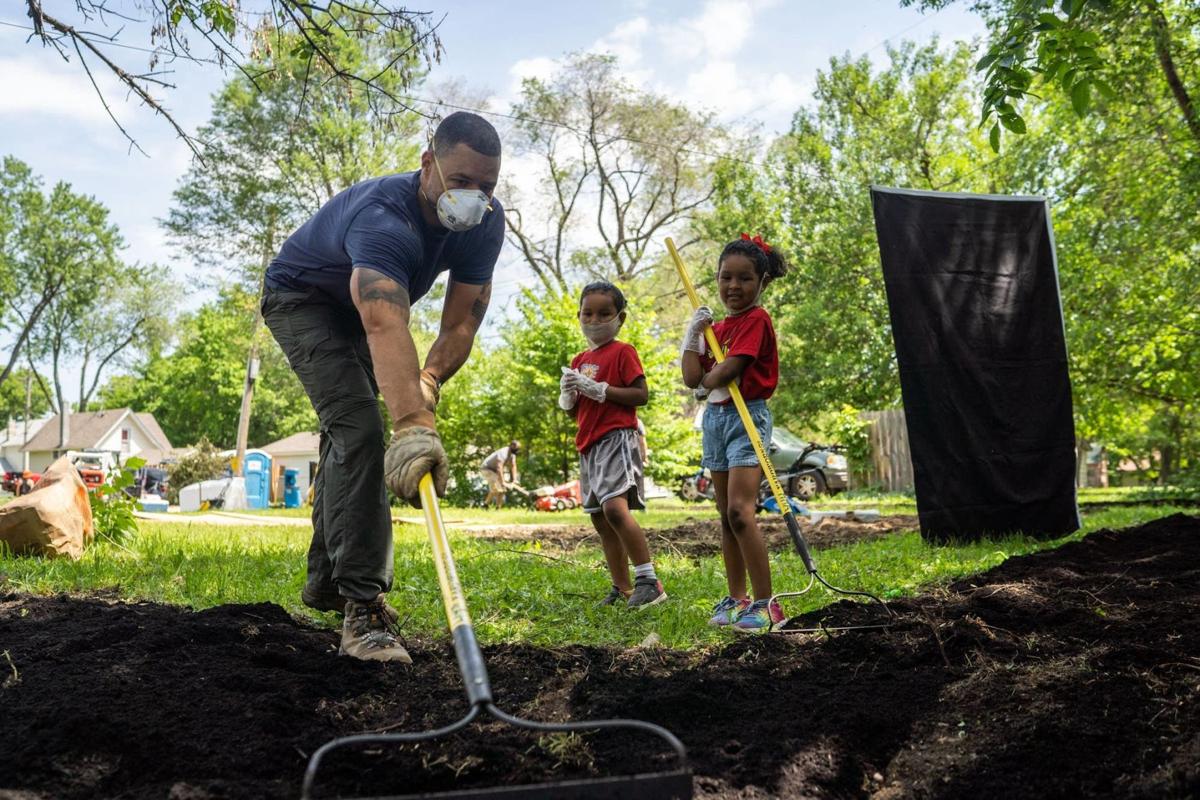 Artist Jordan Weber shows 4-year-old Shadow (center) and 5-year-old Xochitl how to spread dirt into a garden at one of Youth Farm’s community garden sites in north Minneapolis this month. Weber created the design for the garden, which is modeled after a basketball court. 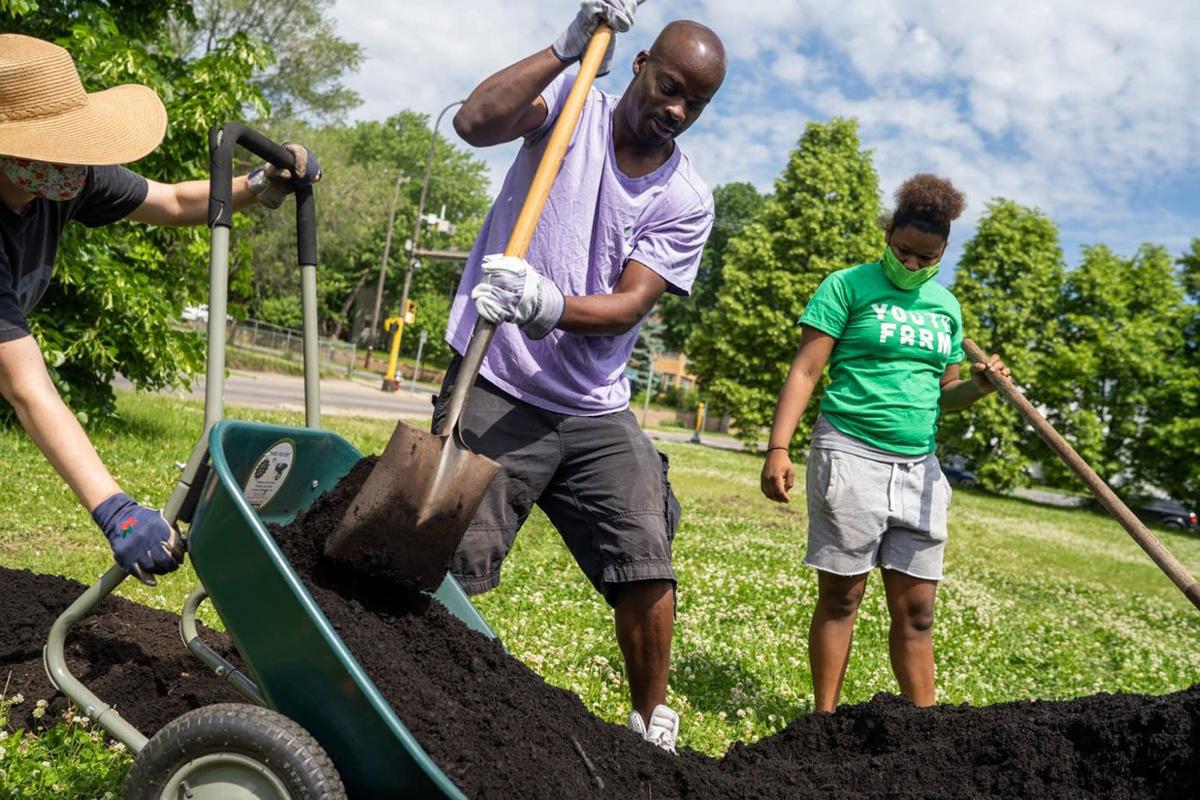 Volunteer Kordell Franklin (center) works alongside Ce’Ve’Onna Young at a Youth Farm site that they’re turning into a community garden in north Minneapolis. 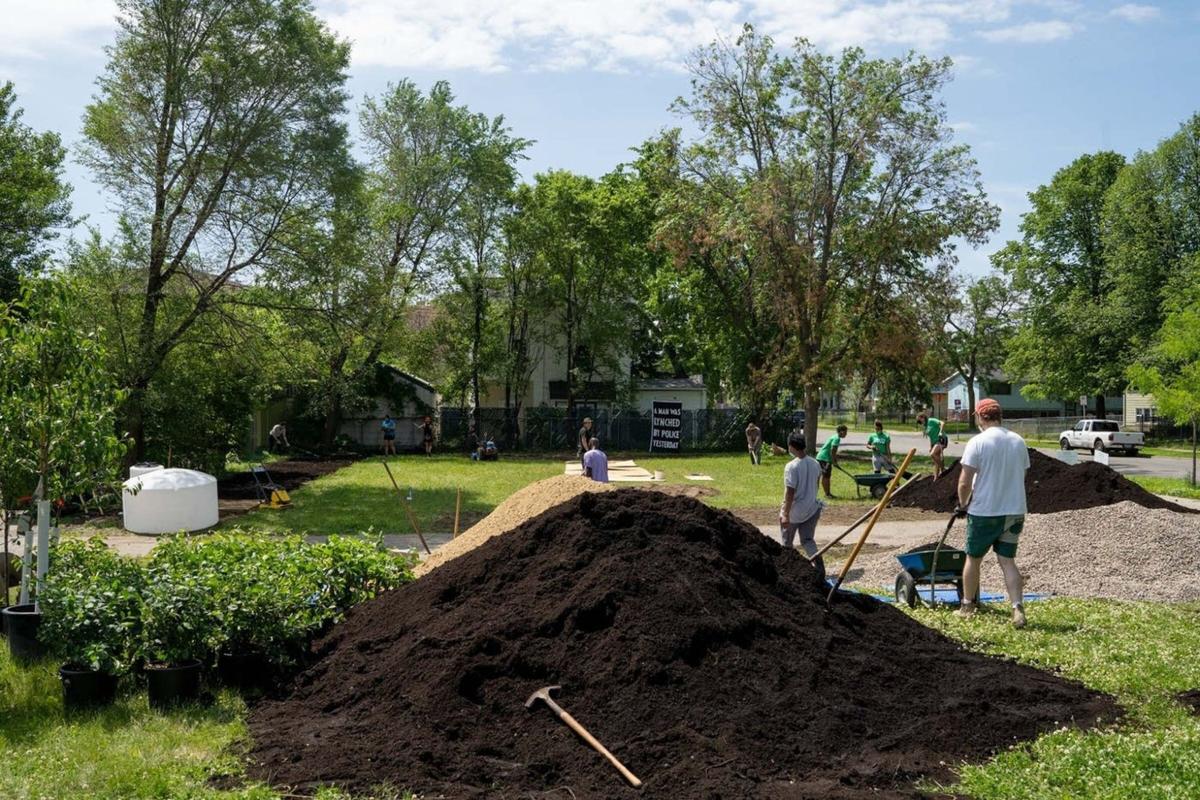 Piles of dirt wait to be spread into the community garden that Youth Farm is building in north Minneapolis.

Artist Jordan Weber shows 4-year-old Shadow (center) and 5-year-old Xochitl how to spread dirt into a garden at one of Youth Farm’s community garden sites in north Minneapolis this month. Weber created the design for the garden, which is modeled after a basketball court.

Volunteer Kordell Franklin (center) works alongside Ce’Ve’Onna Young at a Youth Farm site that they’re turning into a community garden in north Minneapolis.

Piles of dirt wait to be spread into the community garden that Youth Farm is building in north Minneapolis.

MINNEAPOLIS — It’s one of those warm early summer days in north Minneapolis, and about 20 people are buzzing around a grassy vacant lot off of busy Lyndale Avenue North. The lot won’t be vacant for long as tractors push rocks, dump trucks drop dirt and a stand of trees with roots bundled in burlap waits to be planted. Everyone is hauling, digging and plotting. They are building an urban garden, or food forest.

This urban agriculture project in the Hawthorne neighborhood has been in the works for months. But after the police killed George Floyd, it has become a healing space — particularly for Black residents who often feel targeted and criminalized.

Marcus Kar, who works with a crew of teenagers and young adults, said working in the garden is a form of therapy.

“We’ve been using it as a way to silence the noise and really feel our feelings,” said Kar, who directs programming on the city’s north side for Youth Farm, an urban agriculture organization.

The garden will incorporate both food and indigenous grasses — a mix of fruit, berries and nut trees. Kar pictures people in this racially diverse neighborhood, where about half of the residents are Black, just plucking healthy food right from the garden as they walk down the street, regardless of whether a corporate grocery store chain has decided to build here.

Ce’Ve’Onna Young, is one of the teens with Youth Farm working here alongside Kar. She is shy and unassuming but reflective and deeply upset about the killing of Floyd, part of a pattern of injustices against the Black community at the hands of police.

“I just want everybody to know that all lives matter, but our lives are in danger right now, especially me growing up Black,” she said. “I don’t want someone just walking up to me and acting racist to me for no reason, because I wouldn’t do that for somebody else.”

Young is working side by side with Yasmine Banishoraka, who is white and lives in south Minneapolis, not far from the city’s 3rd Precinct police station that was torched among protests after Floyd’s killing.

“I have been trying to figure out where I best fit into this and where I can best be an ally to people of color,” said Banishoraka as she shoveled soft brown soil into wheelbarrows. “And this is the best way that I feel like I can do that.”

But she is anxious for real systemic change.

“I know I don’t walk down the street worried about how a police officer is going to approach me,” she said. “I’m tired of stories of the people that I love that constantly have these negative experiences. That shouldn’t happen. So I really want real change — mainly some major change to the police force is an excellent start.”

Jordan Weber, artist-in-residence at the Walker Art Center, designed this garden long before Floyd was killed by police just about 6 miles away. But Weber, who is Black, knows now it’s a gathering place for those feeling shock and horror at the injustice of Floyd’s death as they wait to see what officials will do about racist systems and police brutality.

He says doing this work is an act of healing.

“Today is about putting Black, brown, Indigenous, white hands in the soil together,” he said as he watched the crew taking a break drinking Gatorade under the shade of a canopy. “I can’t speak for the totality of Minneapolis obviously, but I know for the 20 to 30 people involved in this project, it’s been extremely crucial to the process of healing and building anew.”

Before the digging and planting started, Missy Whiteman, who is Northern Arapaho and Kickapoo, and Art Owen Jr., who is Dakota, blessed this ground.

Weber says it was a powerful message about resistance, solidarity and sovereignty. He remembers Owen acknowledging the fires that consumed a nearby Cub Foods, Walgreens and other businesses in the wake of Floyd’s killing.

As Owen blessed the garden, he told them this is a step toward self-sufficiency “on your own land, with your own people,” Weber recalled.

Whiteman has come back to help build the garden. She said she feels both the heaviness of Floyd’s death and the lightness of creating something new and good.

“A lot of people are like, ‘This is the time of the Phoenix,’” she said “It is like all the feelings and emotions we’re feeling — this is part of the death and rebirth process, and we are all feeling it collectively.”

Kar said they plan to finish this garden in July and he invites all the community to come and gather here.