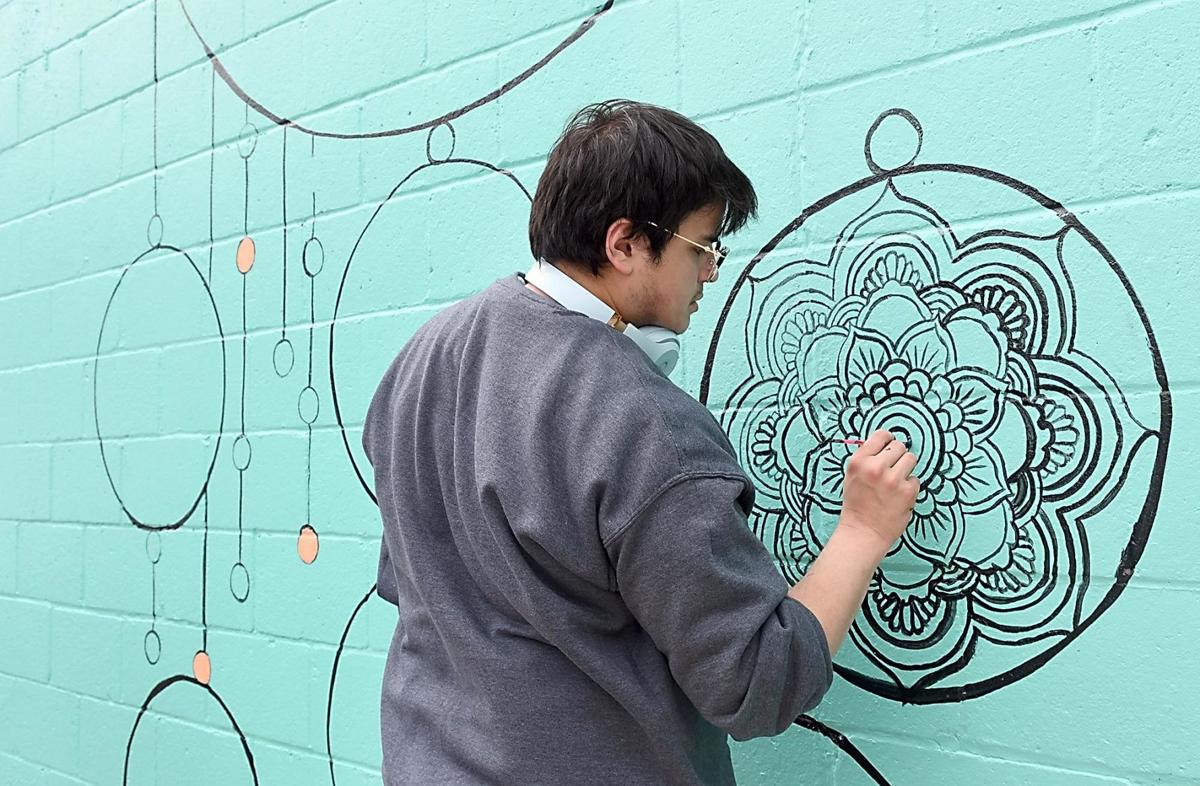 Justin Ek works on one of the dream catchers on the new mural. 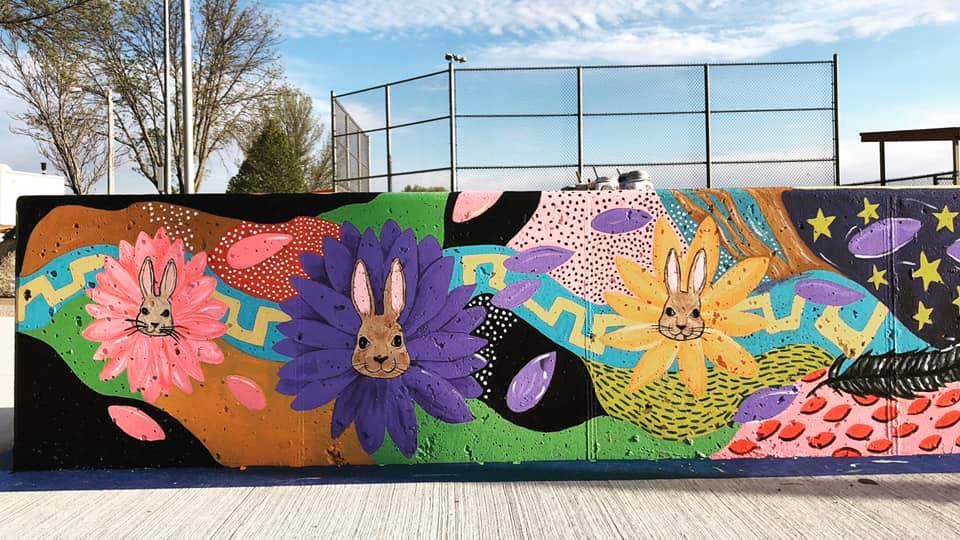 The 410 Project has finished two walls out of the six at Fallenstein Park. 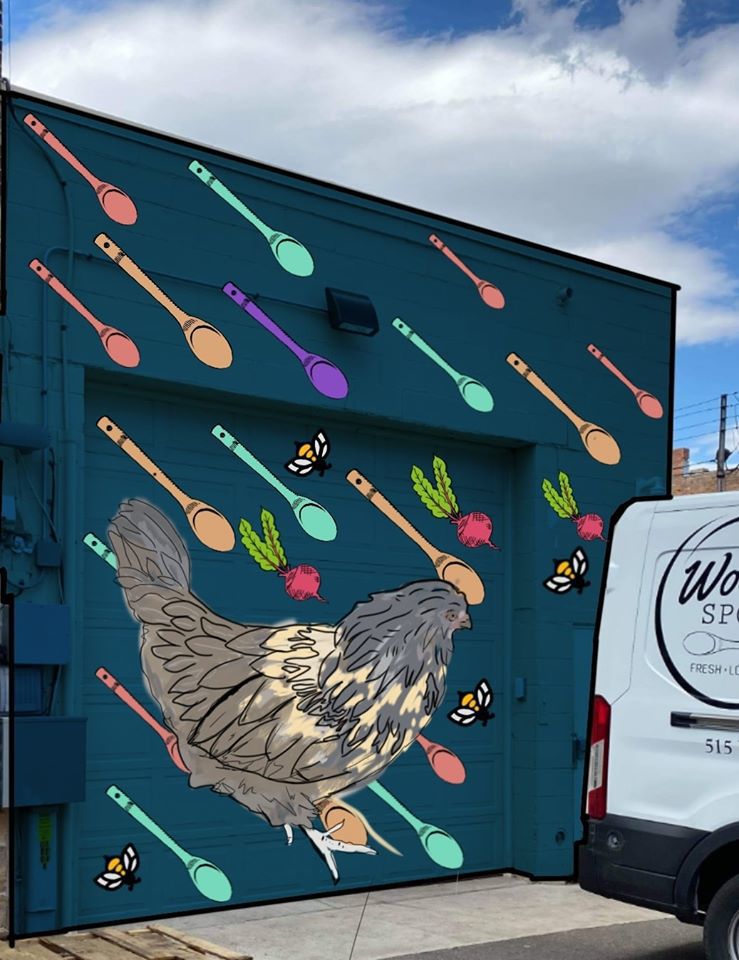 Bellissimo Paint and Coating’s rendering of the Wooden Spoon mural.

Justin Ek (right) and his mother Jennifer work on a new mural on the wall of the family’s painting business on Riverfront Drive in Mankato.

Justin Ek works on one of the dream catchers on the new mural.

The 410 Project has finished two walls out of the six at Fallenstein Park.

Bellissimo Paint and Coating’s rendering of the Wooden Spoon mural.

The community mural that was once upon Bellissimo Paint and Coating’s wall has vanished.

The mural, which was done during the summer of 2018 had been much anticipated in town. Many artists and non-artists came together to fill in the spots of the outlined mandala.

There was no way to miss the highly contrasted blue backdrop against Old Town’s buildings. Social media also flooded community members and visitors alike with selfies upon the mural.

But now the mandalas have been covered up to give life to a new mural.

Justin Ek, co-owner of Bellissimo, said the building needed maintenance which required painting the side of their building.

“There was no way that we wouldn’t bring it back to some capacity,” Ek said.

The design, created by Ek and Bellissimo, features dream catchers. As of this week, Ek and his mother, Jennifer, began to outline the design.

“We wanted something meaningful and spiritual, especially after COVID,” he said. “It was a certain catharsis to make this design to honor indigenous and religious roots.”

The Bellissimo building, Ek said, will probably be finished by the end of summer. As they outline the design, they will eventually invite others to paint the mural.

However, unlike the last mural, this invitation will be by appointment only which will be done on Facebook.

“We will take in one group at a time and have a sanitation company for the cleanliness of our job site,” Ek said.

Keep an eye out to make an appointment via Facebook as they begin implementing a plan in the next couple of weeks.

Currently, they aim to have the mural finished by the end of summer. This will be just one of their projects throughout the summer.

Bellissimo will also be creating a mural on Wooden Spoon’s wall, featuring a chicken and colorful spoons. Other projects include murals on the Circle Inn, Ruby Ranch and Cultivate Mankato.

“Keep it local. … People that do this work in the community are local,” he said. “Walmart doesn’t do this for us. … Small companies do that stuff for us.”

Ek says that since the creation of the community mural, businesses and the city have taken up more public art.

“We have met so many people from (the community mural),” Ek said. “Every single day that people were here, there were so many customers. … It just left a ripple in our community.”

In addition, the murals have given the area another reason for people to visit and take photographs. Ek says he’s also seen a decline in vandalism after the mural.

“It felt much safer down here,” Ek said.

The art has also given businesses and areas an identifiable mark. The eccentric designs add color to the community, and prompt visitors to take photographs. They add foot traffic.

North Mankato’s Fallenstein Park has also seen more color the last couple of weeks. The 410 Project was invited back to paint murals along the six barrier walls at the park to match the tunnel they had painted last summer.

The design includes bright colors featuring parts of the landscape, such as butterflies, bees and prairie flowers. So far two walls have been completed. Each wall, Sikkila said, will take on a different theme. She hopes visitors will take a moment to engage with each wall.

Much like businesses and other art fixtures in town, Sikkila said the murals give these places an identifiable element — including the 410’s vibrant yellow honeycomb.

“From a business standpoint, even with the 410, it’s part of our landmark,” Sikkila said. “I think people are starting to realize that visual work can really tell a story about a community as well.”

Whether historically or just the essence of a community. She’d noticed, too, that other places in the nation have been using public art not just for aesthetics.

For example, an artist in Denver made a mural to bring awareness to essential workers during the pandemic.

“(The art) starts the conversations of the purpose of it,” Sikkila said.

The Fallenstein Park murals are tentatively expected to be finished by mid summer.