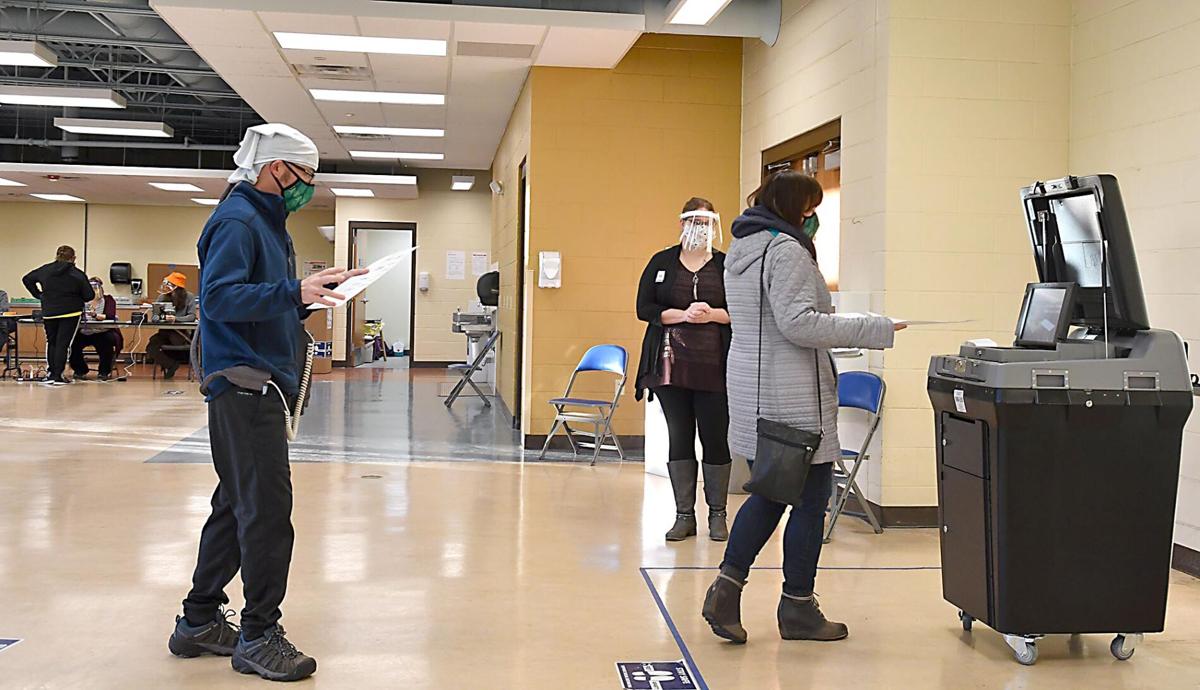 Brendan O’Halloran waits for his wife, Beth-Ann, to place her ballot in the counting machine while voting Tuesday at the former MRCI building. Brendan thought it was important to vote in person even though he is being treated for stage 4 brain cancer. 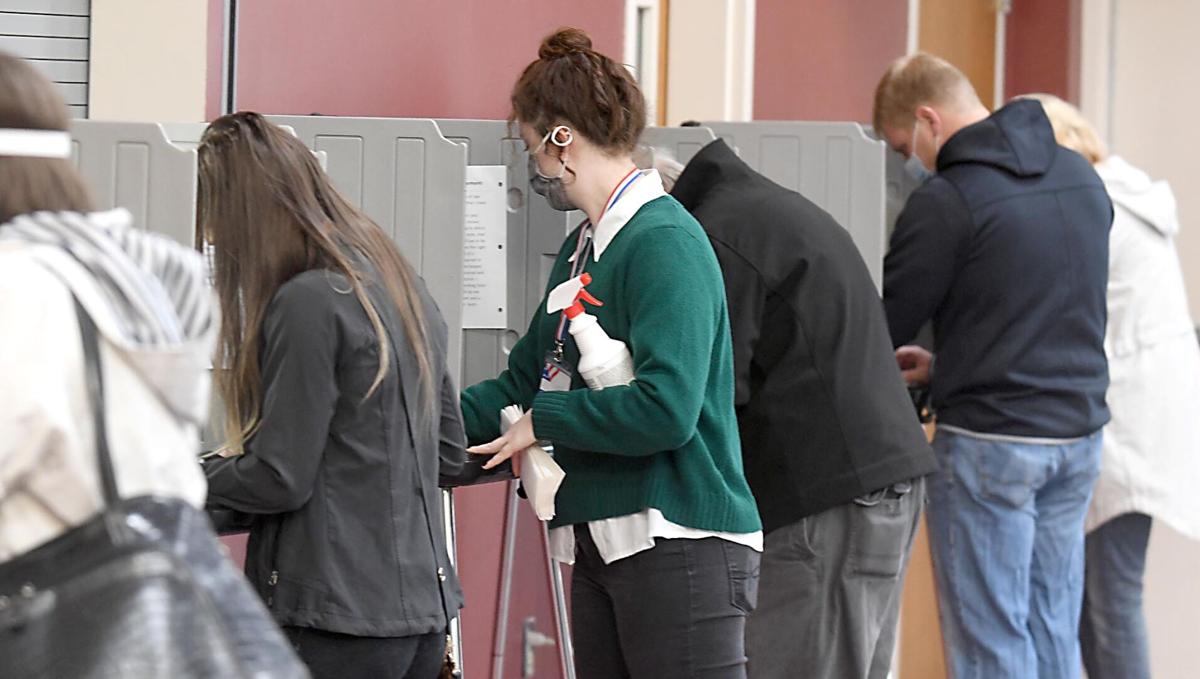 Hannah Sayler wipes down a voting booth during a rush of voters Tuesday at Christ the King Lutheran Church.

Brendan O’Halloran waits for his wife, Beth-Ann, to place her ballot in the counting machine while voting Tuesday at the former MRCI building. Brendan thought it was important to vote in person even though he is being treated for stage 4 brain cancer.

Hannah Sayler wipes down a voting booth during a rush of voters Tuesday at Christ the King Lutheran Church.

By Natalie Rademacher and Tim Krohn

MANKATO — Local polling stations ended Election Day fairly quiet after a strong early morning rush and a steady stream of voters most of the day.

His office received about 22,400 absentee ballots as of Tuesday, and he said his rough early estimate was that 12,500-13,000 voters cast ballots Tuesday. That would mean about 35,000 people in the county voted or in the upper 70% range of voter turnout.

“That would be a pretty strong turnout. But the numbers are very preliminary yet,” Stalberger said.

Ilyaas Mohamed, 20, tried voting at the former MRCI building on Map Drive Tuesday evening but discovered he was supposed to vote somewhere else. He decided to vote in person because it’s easier to him than mail-in voting.

“I just want to see some change,” Mohamed said about why he is voting. He has been seeing young people active on social media trying to get friends to participate in the election. He attributes the pandemic and U.S. President Donald Trump for the higher voting activity from young people.

Some election officials said there has been less in-person turnout than other presidential elections due to the higher number of absentee ballots and early voting.

About 2,500 people had voted at the MRCI building as of 6:15 p.m. Many of the voters at the building Tuesday evening were young people. Numerous college students said voting in person was easier than mail-in voting or requesting an absentee ballot.

Along with turning out to vote, many young people were helping at polling stations in Mankato this year.

Sergio Salgado, one of the young people volunteering as an election judge, was helping at Christ the King Lutheran Church polling station because he wanted to see how democracy works and be a part of the process.

While officials say election judges are typically older, some opted out of helping this year because of the COVID-19 risks.

“Some election judges would have a hard time being around this many people for 14 hours,” said Duane Olson, an election judge for the 13th precinct. Olson donned a bright orange hat and face shield, which he wears instead of a mask so voters who may be hard of hearing can read his lips.

Despite some regular election judges not returning this year, election judge Cindi Baker said there are more judges this year than usual, mainly due to the increase in young people coming forward to help.

“There’s been a new resurgence in interest in politics,” Baker said. This is her fourth time working as a judge during a presidential election.

Baker noted the process of registering and helping people vote is smoother this year than in prior elections due to the process being mostly electronic now. Even with the extra sanitizing, social distancing and other COVID-19 precautions, she said voters can be in and out within five minutes.

At the former MRCI building about 50 people were lined up outside prior to the start of voting at 7 a.m.

Brendan O’Halloran walked in to vote with help from his wife Beth-Ann. Brendan is being treated for stage 4 brain cancer and carried a machine that administers his treatments with him. His doctors told him to do “normal things” after his brain surgery, so he decided to vote in person instead of absentee even though it took a little extra time.

“It’s very satisfying putting your ballot in the machine and being counted,” he said.

At the polling location at St. Paul’s Lutheran Church in lower North Mankato, 100 people had voted before 8 a.m. and a steady flow of voters continued coming in. By 6:30 p.m., 640 people had voted at the church.

“We had people waiting in line at (6:35 a.m.),” said election judge Duane Rader. This was only his second time being a judge, with the first being this year’s primary election.

“This is more fun. In the primary we maybe got 50 people all day long. It makes time go quicker when there are people coming in.”

Rader, superintendent of parks and water for North Mankato, said he thought it was important to volunteer to judge. “The city is real involved in (the election system), and it’s an important election.”

Adrianna Lobitz, 23, was also serving as a first-time judge at St. Paul’s.

“I know a lot of judges are older so being younger I thought it was important to help,” said Lobitz, a recent college graduate. “And I know a lot of women fought hard for me to be able to vote so I wanted to do my part. I’m really enjoying it.”

She, like the other judges at all the polling locations, was helping voters while ensuring social distancing and promoting other safety measures, including the single use of pens, masking, plexiglass partitions and sanitizing.

At the Map Drive polling site voter Markell Farnsworth was one of the first in line to cast his first vote in Minnesota. The Orlando, Florida, native is attending MSU and majoring in dance education.

“It’s important for me to vote.” He said gay marriage rights and health care are two of the big issues for him.

Farnsworth said politics has been a big topic among friends and he knows the political divide is strong.

“I have friends of varying political views so I try not to cause problems if they don’t hold my views. But you also have to address issues to solve issues, so it’s a fine line.”

While early turnout Tuesday was brisk, a record number of voters have already cast absentee ballots. A hilltop power outage lasted about a half hour.

Secretary of State Steve Simon said late Monday that more than 1.8 million absentee ballots had been returned and accepted —about 62% of the total turnout in the 2016 presidential election.

In Blue Earth County about 20,000 absentee ballots had been accepted with Nicollet County accepting more than 10,000.

PHOTOS: Voters head to the polls on Election Day