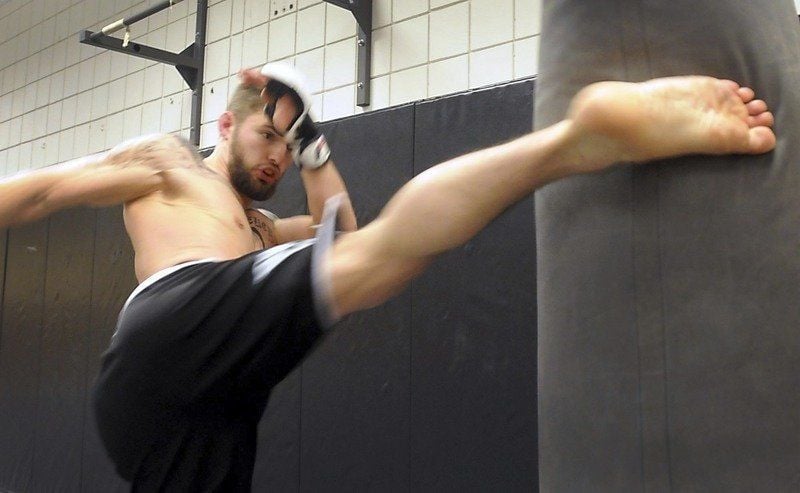 Photo by Pat ChristmanBryan Mortensen overcame a troubled youth that included being kicked out of high school and several months in jail to become an amateur MMA fighter. He hopes to turn pro after his Dec. 20 fight for a featherweight title. 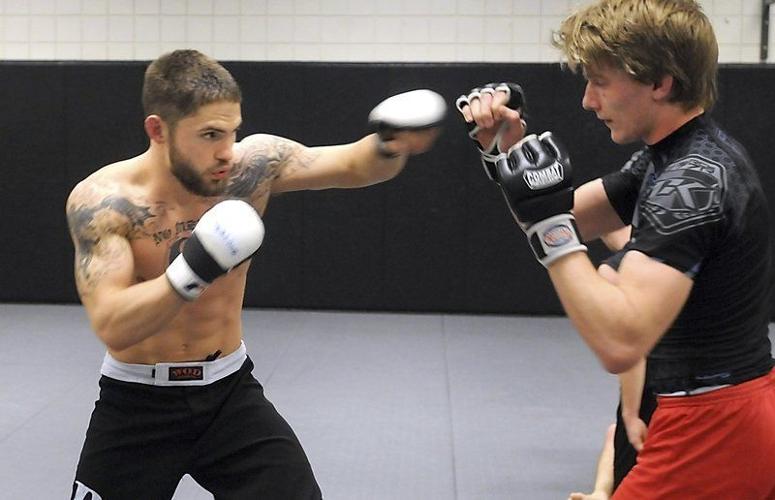 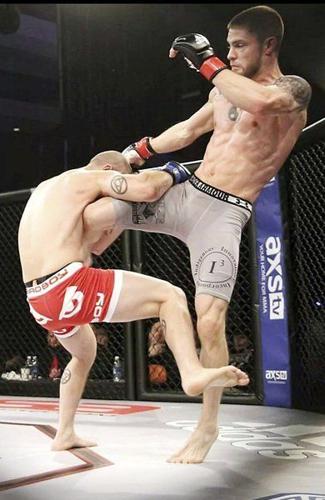 Photo by Pat ChristmanBryan Mortensen overcame a troubled youth that included being kicked out of high school and several months in jail to become an amateur MMA fighter. He hopes to turn pro after his Dec. 20 fight for a featherweight title.

He overcame a troubled youth, a high school expulsion and a stay in jail to post a 5-0 record in his first eight months of mixed martial arts fighting.

Then his family life fell apart, his grades in school dropped and he lost three of his four sanctioned fights over a period of 15 months.

Now Mankato resident Bryan Mortensen is back on the upswing. He’s won two consecutive fights, re-enrolled in college and holds a steady, full-time job while taking care of his 6-year-old son every other week.

Mortensen, 26, will have a chance to build upon his underdog story Dec. 20 at Canterbury Park. There he will fight an undefeated 19-year-old for a featherweight title. A win could give him a chance to become a professional MMA fighter, after nearly six years as an amateur.

“It would be perfect time to come back,” he said, “kind of like a Rocky story.”

The plot hasn’t often gone according to plan, however.

Mortensen grew up in Texas, where he said he would get in fights because he was the only white kid in his school. He came up to Mankato in elementary school but got in more trouble and was sent back to Texas at 13.

Mortensen again came back to Mankato and attended Central High School. He made the varsity basketball team as a 10th grader but was kicked out of school and never played a game.

He eventually received his GED from Hubert H. Humphrey Job Corps in St. Paul. But at 18, he was convicted of aiding and abetting a burglary and spent a few months in jail.

After he got out, Mortensen won a couple amateur fights at Busters Sports Bar & Grill in Mankato and was talked into training for MMA. He began going to school at Minnesota State University and training with the school’s MMA club.

Life was looking up for Mortensen around that time. He had a son and was trying to start a family. He was undefeated in his first five MMA fights. He had a 3.5 grade-point average after three years of school.

But his family life soon fell apart. He owed the school money and his grades dropped dramatically, a result, he said, of his crumbling family life. He also took several fights for which he was ill-prepared, hence the dip in his record.

Gradually Mortensen got his life back together. He switched colleges and majors, enrolling in online courses at Southwest Minnesota State University to study business. He lost his first fight of 2014 but won his second, just about four weeks later. In October, Mortensen defeated a previously undefeated fighter from Wisconsin, dropping down a weight class for the first time.

Mortensen gives a lot of credit to his son for helping him turn his life around. “Once I had him, it basically grounded me and made grow up,” he said. “He’s basically like my angel.”

Those who know him well say he’s become serious about fighting. He’s retooled his diet and appears to have found a balance between his work and training.

“He’s really kind of dedicated himself and realized, ‘I’m not a young kid anymore,’” said Dan Moret, an MMA fighter from Mankato who trained with Mortensen before turning pro. “He’s kind of bringing it all together now, so it’s exciting to see what he can do with it.”

Taking the next step won’t be easy, however. Mortensen’s upcoming opponent, the 19-year-old, is 3-0 in sanctioned MMA fights and has defeated the three opponents with submission holds in the first round.

“All he needs is the big win, and he’s going to get his crack at a pro career,” he added.

For his part, Mortensen appears confident he will win the fight. He said he’s had his best training camp and has been working out twice a day in preparation.

John Castaneda, the only professional MMA fighter in the University’s MMA club, also appeared confident in Mortensen’s chances. He said Mortensen is bigger, faster and stronger than his opponent and can win if he executes his game plan.

Moret appeared confident in Mortensen’s chances, too, noting his experience advantage. He said Mortensen has the advantage on his feet and can win with a good strategy there.

Mortensen said he plans on taking some time to rest after this fight. He’s working to become a certified personal trainer and hopes to one day to focus on a professional fighting career.

“He’s really been upping his game,” Bjornberg said. “If Bryan wants to be a serious professional, that’s the talk we’ll have with him after this.”