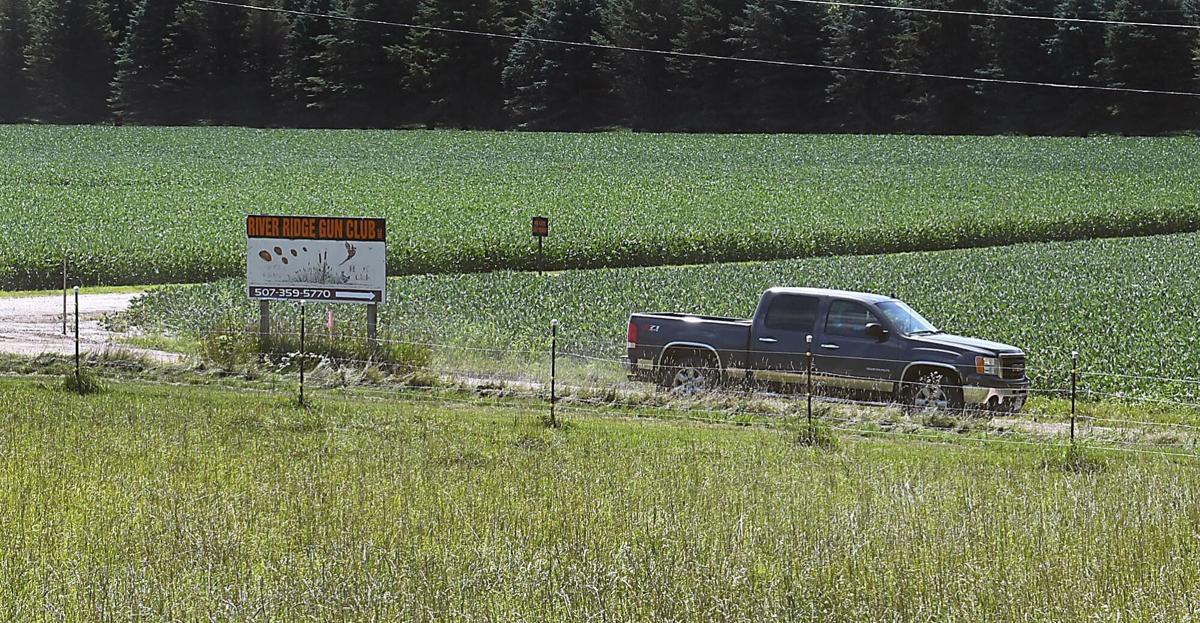 A truck pulls into River Ridge Gun Club on Friday, as seen from the Cordes' residence next door. The gun club's owners are planning an expansion project to provide rifle and pistol ranges among other activities, drawing opposition from some neighbors. 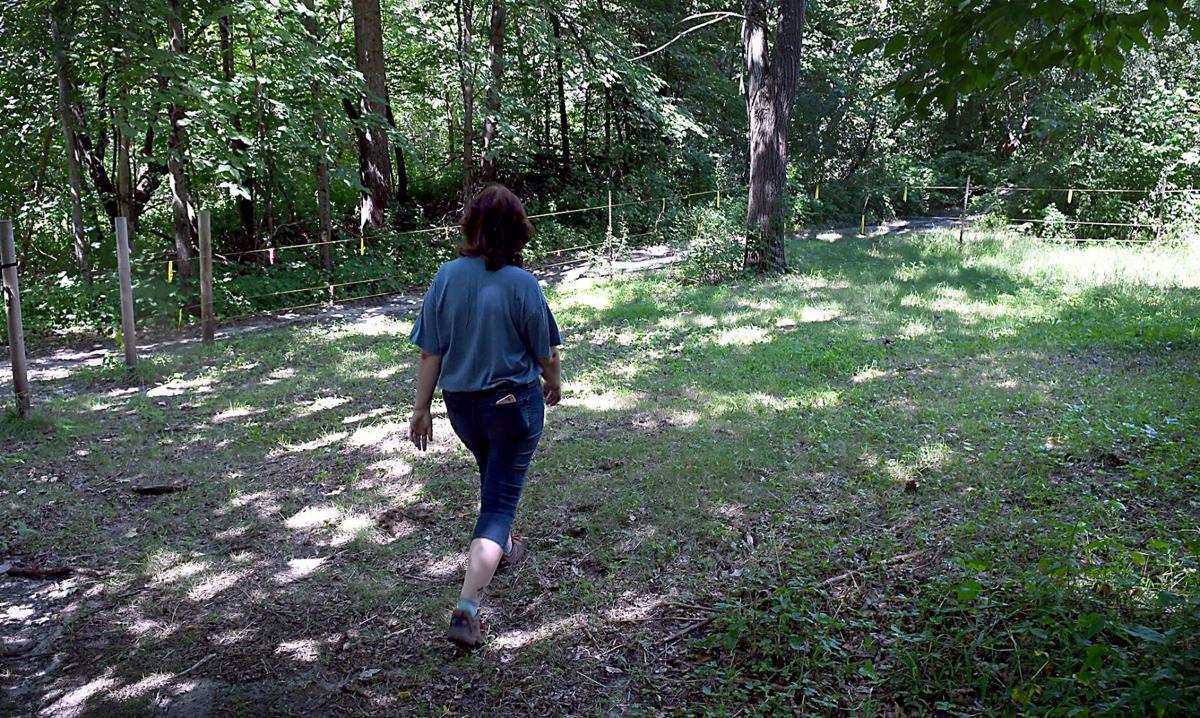 Veleda Cordes walks through a horse corral Friday, which she and her husband, Wade, say is within 500 feet of where shooting will happen at the proposed gun range expansion next door..

Veleda Cordes greets Spitfire, one of four horses she and husband, Wade, have at their Courtland property Friday. The couple say they could be forced to move if a proposed gun range expansion happens next door. Veleda said the sound of more gunshots would negatively impact the horses.

A truck pulls into River Ridge Gun Club on Friday, as seen from the Cordes' residence next door. The gun club's owners are planning an expansion project to provide rifle and pistol ranges among other activities, drawing opposition from some neighbors.

Veleda Cordes walks through a horse corral Friday, which she and her husband, Wade, say is within 500 feet of where shooting will happen at the proposed gun range expansion next door..

Wade and Veleda Cordes worry they’ll have to move out of their Courtland home if plans for an expanded gun range next door come to fruition.

Subjecting their four horses — Spitfire, Shotgun, Frankie and Casper — to so much rifle fire every day, Veleda said, would be too cruel.

River Ridge Gun Club, formerly a shotgun shooting range and hunting preserve, lies just across a stream from their property. The club’s new owners got an OK from the Nicollet County Board this week to eventually allow rifle and pistol ranges and other expanded shooting activities on the property.

After joining other neighbors in speaking out against the plans, Wade and Veleda are working with a lawyer to continue the fight against the project.

“We’re pretty upset because we don’t want to move,” Veleda said. “We love our property.”

The Cordeses bought their home about five years ago when River Ridge was still a shotgun-only club. They and the horses dealt with the occasional shotgun blasts without much issue.

Allowing more guns, and therefore more gunfire, is where they draw the line. They’re not opposed to guns — Veleda recently got her permit to carry — but don’t think it makes sense near homes.

“You buy a place in the country to be outside and enjoy the peace and quiet of nature,” she said. “With all those shots we wouldn’t be able to have any kind of peace.”

They brought their concerns to county officials at multiple meetings. They and their lawyer, Roger Hippert, at Tuesday’s board meeting presented a letter from a University of Oklahoma doctor on how the sound of gunfire negatively impacts horses.

They’re also arguing a state statute saying firearms can’t be discharged “within 500 feet of a stockade or corral” with livestock should prevent the planned expansion from happening. The Cordeses have a corral they believe is about 375 to 400 feet from where shooting will happen.

Joe and Christine Michaletz, who own River Ridge, dispute how close the corral is. Nicollet County’s Director of Property and Public Services Mandy Landkamer said at the Tuesday meeting that staff couldn’t verify if there was a corral that close.

The Cordeses have multiple corrals, with the one closest to the gun range being in a wooded area down a walking path from their home. They said it’s been there for years.

The Michaletzes used to go to River Ridge to shoot sporting clays before purchasing the property in late 2018. They decided to end the pheasant hunting part of the business in favor of expanding the trap fields and adding rifle and pistol ranges, among other options.

They feel the switch will be a safer use of the property. Rather than pheasant hunters roaming the 200-acre land unsupervised and potentially firing across property lines, they want to confine shooting activities to designated spots and use berms to keep bullets on the property.

Neighbors suspect bullets have still been flying onto their property this year, raising safety concerns. The range isn’t open for commercial use yet, but the owners are allowed to use it.

Tim Gulden, a vegetable farmer whose land is near the range, was working in his field one day in June when he heard gunshots in the distance. A bullet then slammed into a tree about 30-feet away, he said.

In hindsight, he knows he should’ve called the sheriff’s office to get the incident on the record. He didn’t make the call, figuring the shots had stopped anyway and there was little law enforcement could do.

Gulden, too, is no stranger to guns. He described himself as an avid outdoorsman who hunts and supports the Second Amendment.

But he also has safety concerns for himself and the 15-20 workers he hires every summer to help in the fields.

“I just want to see it done with safety in mind,” he said. “All it takes is one shot to go over, and it’s going to land somewhere.”

The Michaletzes said they empathize with the concerns, want to be neighborly and intend to make the range as safe as possible. Joe said there’s no way the bullet came from their personal shooting range, because there’s a berm in place and a gravel pit they don’t own is in between.

One of the reasons the couple is motivated to add the rifle range is because they see a clear demand for it. Along with the ranges, their plans include offering youth gun safety and conceal and carry classes.

“There’s a lot of people who own a lot of guns who don’t have a place to shoot them,” Joe said. “We want to provide a safe place to come out and shoot their guns and be educated about gun safety.”

To expand the services, they’ve proposed to build a carriage house with an apartment where a caretaker would live, a clubhouse with enough space for a bar, a catering kitchen, classrooms and other uses. Shooting activities would include a 1,000-yard long-range rifle range, outdoor archery ranges and pistol target ranges, along with continuing sporting clay and trap shooting.

More use at the range would mean more cars on the narrow, dirt road leading to it, raising more concerns for residents. A Courtland Township official told the board the road isn’t in the best shape now and needs work.

Along with the Cordeses and Gulden, three others spoke out against the plans at Tuesday’s meeting. Other neighbors have stayed out of the dispute, while some support the project.

Tim Plath, principal at Minnesota Valley Lutheran, acknowledged the school isn’t as close to the range as some of the homeowners, but said he had concerns about the safety of his students.

The Michaletzes said they intend to add berms or make existing berms higher. They also plan to invest in noise mitigation now that they’ve gotten approval to move ahead with their plans, and expressed confidence the noise levels will be well within compliance when the range opens as soon as May 2021.

“The entire range will be up to standards,” Christine said. “We can’t operate out of compliance when it comes to noise.”

The Cordeses say they’re skeptical about any mitigation and feel like the neighbors’ concerns weren’t taken into account by the county. If they can’t stop the gun range, they feel like they’ll have to leave even though they’ll have trouble selling when buyers find out a big gun range is next door.

“I’m not against guns,” Veleda said. “I’m against feeling like we’re going to be pushed off our own property.”

The county board is set to vote on additional conditions for the gun range — restricting alcohol sales before and during shooting, limiting the types of guns and bullets, and allowing muzzleloaders — at its August 25 meeting.