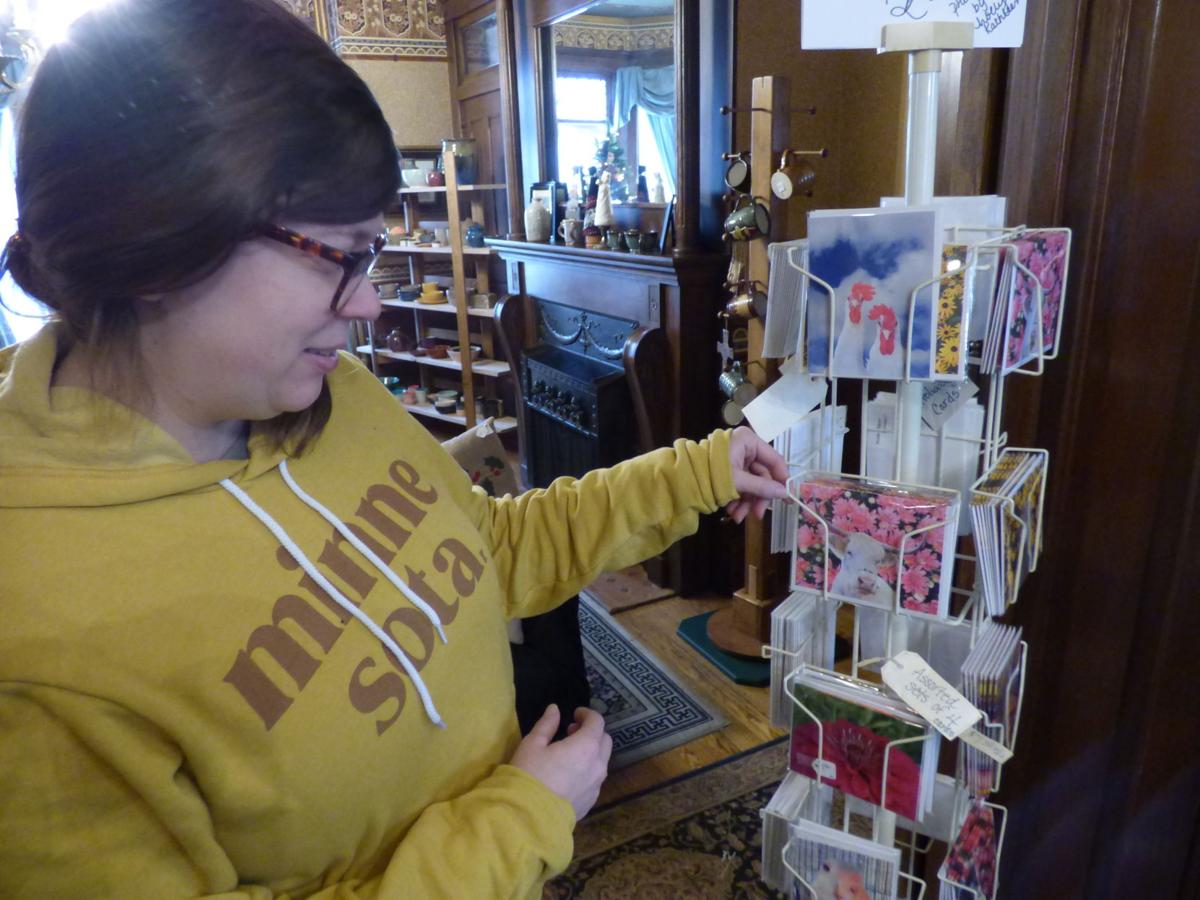 Artist Holly Covington, of Walters, displays postcards made from rural-themed photos she’s taken for sale at the GnomeMade market Sunday. 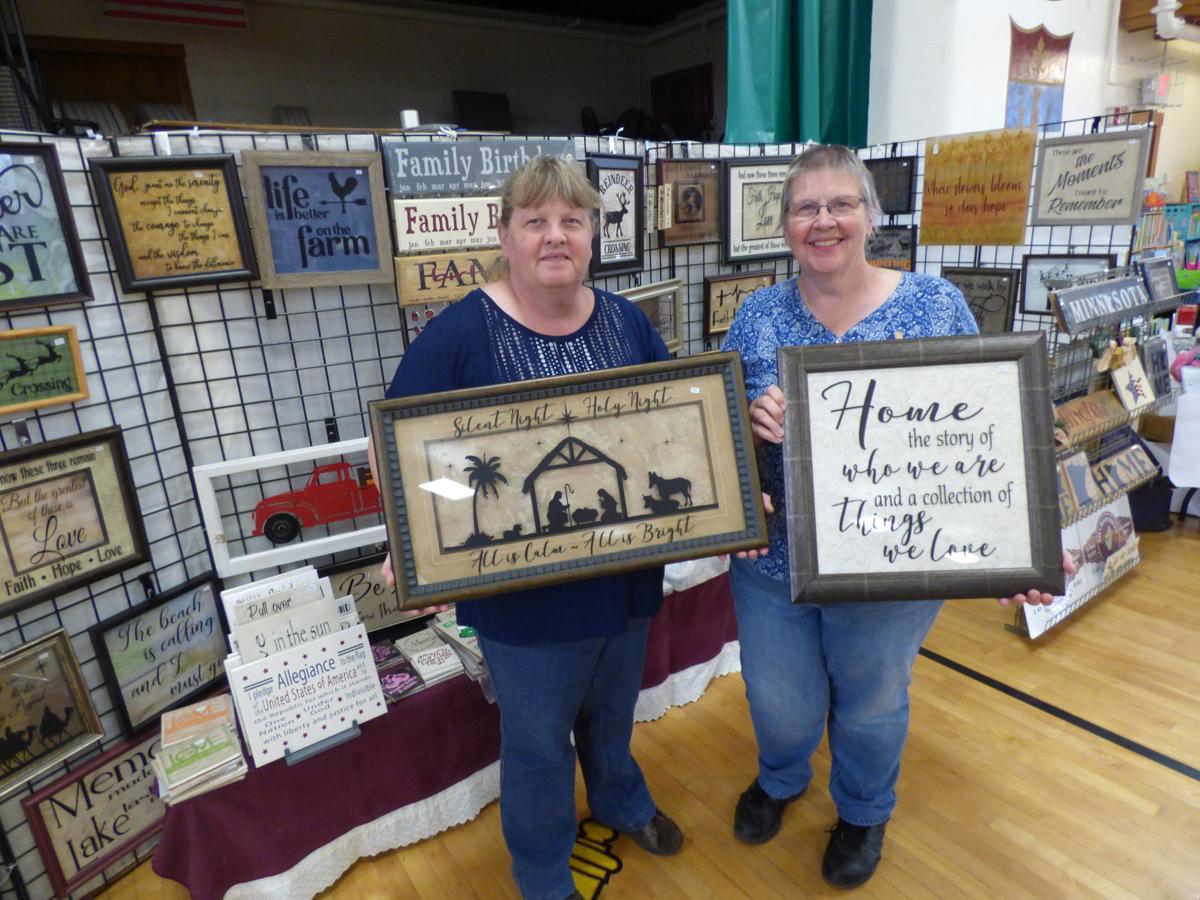 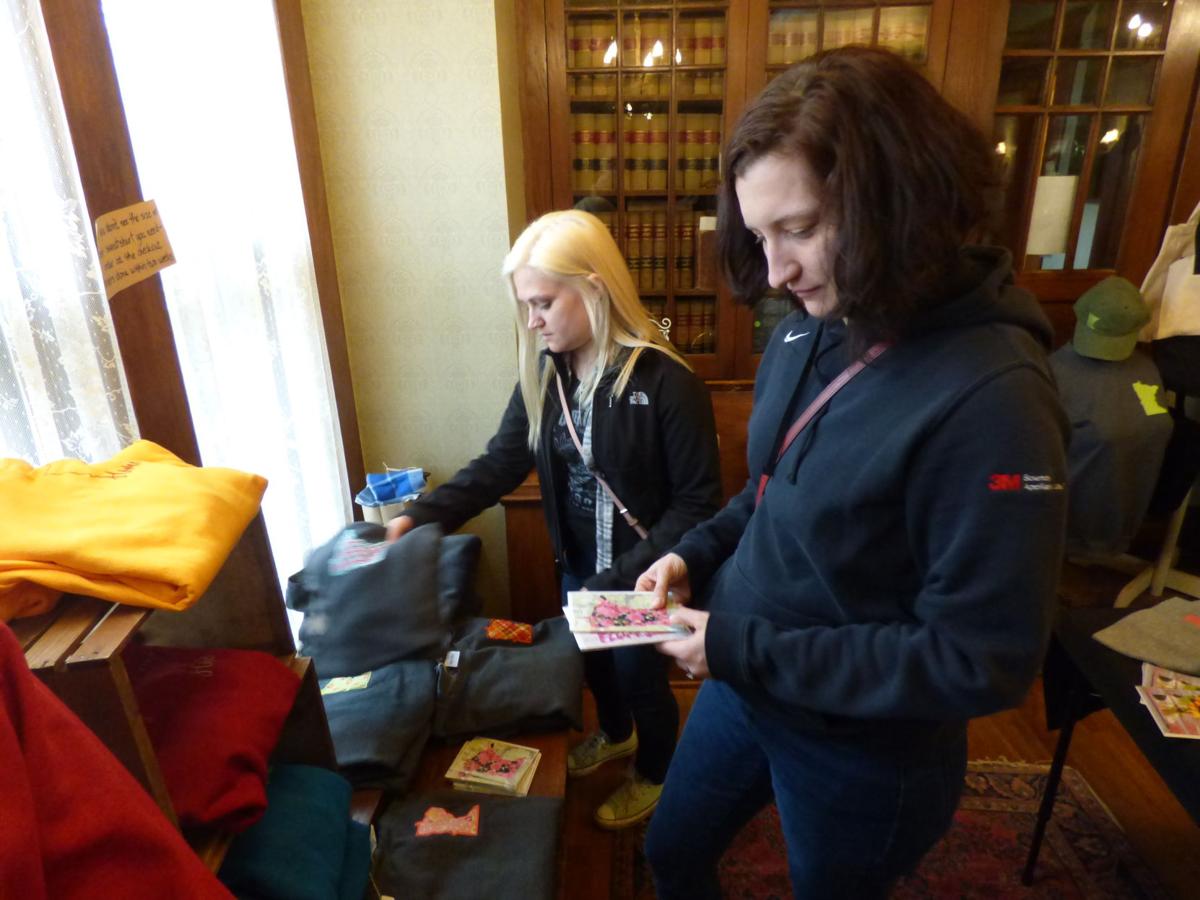 Jessica Sellner, of Sleepy Eye, and Katelyn Fearer, of Hutchinson, browse for gifts at the John Lind House, one of a dozen venues for the GnomeMade market Sunday in New Ulm.

Artist Holly Covington, of Walters, displays postcards made from rural-themed photos she’s taken for sale at the GnomeMade market Sunday.

Jessica Sellner, of Sleepy Eye, and Katelyn Fearer, of Hutchinson, browse for gifts at the John Lind House, one of a dozen venues for the GnomeMade market Sunday in New Ulm.

For shoppers visiting the John Lind House on Sunday, the atmosphere was just as much the attraction as the crafts, pottery and other art for sale. This historic home, built in 1887 in New Ulm by Minnesota’s former governor of the same name, was one of 20 venues opened up to the public this past weekend as part of the GnomeMade Market, a tradition held alongside the firearm deer opener weekend every November.

“It had started as a group of mothers that wanted to stay home with their children but they also wanted to earn an extra income. They were really creative, so they started putting together this show.” said director Mary Jane Glawe, one of the people responsible for organizing the city-wide event each year.

Kathy Covington is one of the founders of the group displaying their works at the Lind House, a venue they moved to 10 years ago, although this group of women have collectively sold their wares for 37 years. She does everything from pottery and stained glass to knitting and embroidery and is one of a dozen artists whose work is on display here.

“Everything in our place is handcrafted by us,” Covington said. “It takes a lot of work but it’s a fun group. We get people from all over the state who come to shop here.”

Larger venues, like the Women’s Expo and Craft Fair, held at Jefferson Elementary School, feature crafts and artwork from 102 vendors. Other venues this year included a rural schoolhouse, a church, the armory, and private homes. She said this year they had a total of about 140 vendors, a significant increase since the event began 35 years ago with eight different artists.

Covington said the Lind House group had record sales this year. She estimates about 3,000 people walked through the doors of the historic mansion over the weekend. Many come from as far as neighboring states to shop and browse at the GnomeMade Market.

“We had a record day Friday and Saturday, so we’re heading for our all-time record sales,” she said. “We’ve got checks from Wisconsin, the Dakotas, a lot from the Cities and southern Minnesota.”

The goal of the event, said Glawe, has always been to highlight the artistic talents of local and regional artists. Many come from New Ulm, but also other countries throughout south-central Minnesota.

Katelyn Fearer, of Hutchinson, and Jessica Sellner, of Sleepy Eye picked up a map and spent the day visiting all of the locations. They say a big part of the fun, beyond browsing for gifts, is being able to visit different unique, historic homes each November. The first year they came, one of the venues was a rural home overlooking a valley near the Harkin Store a few miles out of town.

“A lot of people have opened their homes around town, so that’s really neat,” Sellner said.

Eva Harder is one of those vendors. She has welcomed shoppers into her New Ulm Home for the past seven years, transforming her front living room into a store featuring afghan rugs, tree skirts and over 200 color varieties of dishtowels that line one of the walls.

“The dish towels I make on a knitting machine,” Harder said. “They’ve been good sellers for me.”

Her adult son has been helping her with the popular dish towels in recent years to keep up with demand. Recently, he sent her a picture of the 30,000th dish towel he made for her. Most of her baked goods, which include 75 dozen cookies and 20 pans of bars, have sold out. Harder and her sister-in-law spent four days baking ahead of the event.

Harder was first invited to display her knitting at the Wanda Gag House, but it occurred to her that since she made her rugs, towels and other items at home, the customers could just come to her.

“Sometimes it will be real quiet, and other times there will be 12 people in here,” she said.

For many shoppers, like Amy Merches, who invited her mother, Mary Gagnon, of Mason City, Iowa to shop and browse here, the GnomeMade Market is attractive because it supports local artists who make unique gifts not found at big box stores. Glawe thinks that explains why the event has grown significantly over the years.

“The people that do shop, I think they get a certain gratification by supporting local artists,” Glawe said. “I think having it at a historical location or in someone’s home — that all plays into the experience. They see items that excite them, and they want more than the big box.”

Dan Greenwood is a Free Press staff writer. Contact him at dgreenwood@mankatofreepress.com.