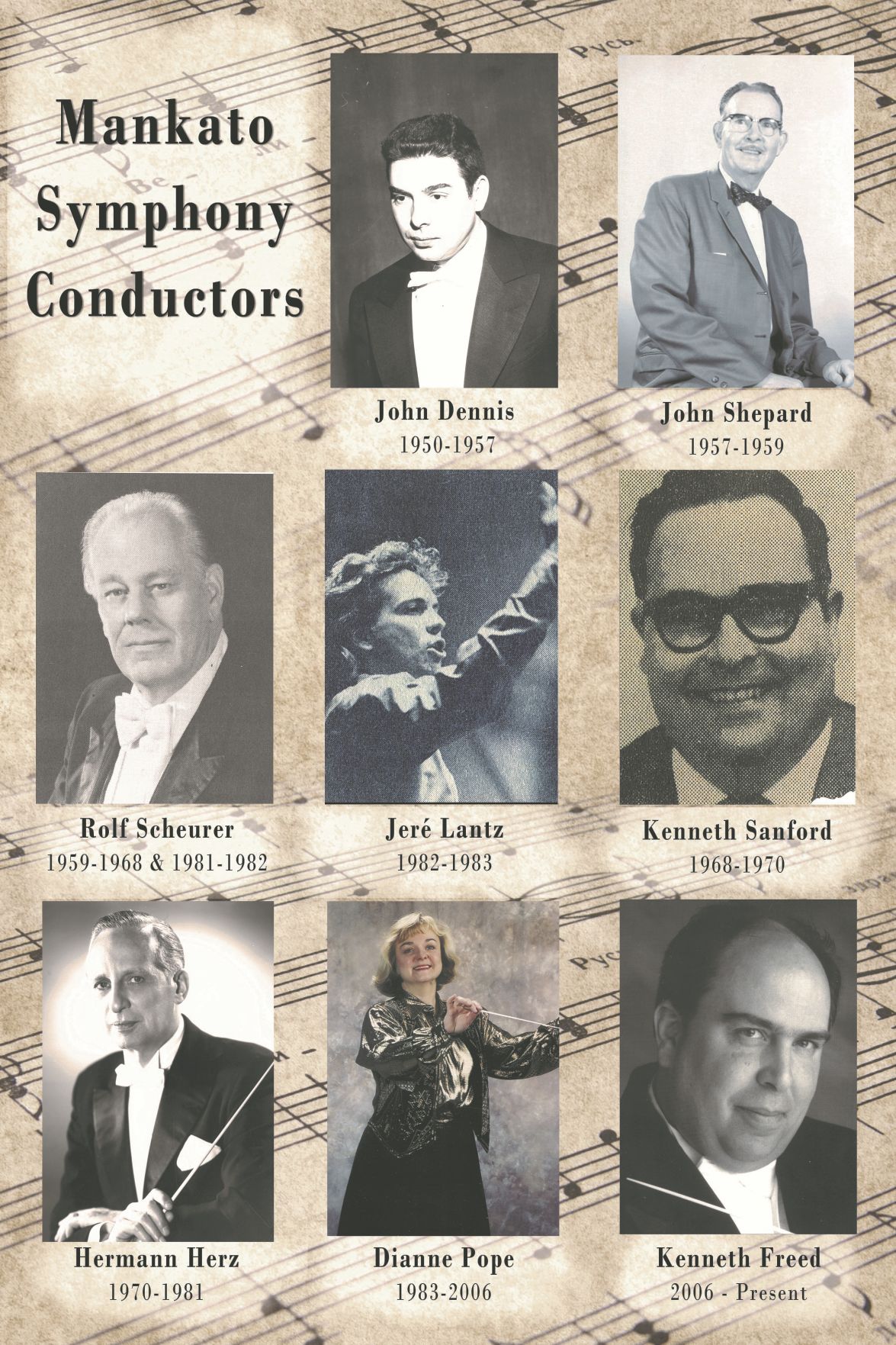 Several conductors have led the Mankato Symphony Orchestra during its 70-year-history.

Several conductors have led the Mankato Symphony Orchestra during its 70-year-history.

Information for the postings were gleaned from a series of booklets published 10 years ago for a diamond anniversary project. String musicians Mary Huntley and Ken Gertjejansen volunteered to oversee the research.

“Easily the best number of the evening was the climactic ‘American Salute’ by Morton Gould ... John Dennis’ conducting was at its best. The orchestra gave the number a rousing performance. The orchestra and director were a perfect team.”

In the fall of 1949, Mankato and North Mankato school superintendents hired a talented violinist, John Dennis, to develop an orchestra program for the school system.

Dennis recruited from the community a handful of adult string players to be Mankato Symphony Orchestra’s first musicians.

The symphony was a success; often there was standing room only at performances.

John W. Shepard took over as conductor in 1957 and served two years in the position.

During Shepard’s leadership, a dual-appointment arrangement was established wherein the conductor of the Mankato Symphony Orchestra also held a faculty position in the Department of Music at Mankato State College. During Shepard’s time as conductor, a town-and gown relationship developed that benefited both the orchestra and the college’s music program.

Rolf Scheurer became the orchestra’s third conductor in 1959, four years after he’d accepted a position at the college in Mankato.

He’d served as a professor of music at the University of Notre Dame and studied composition and conducting in Italy.

Kenneth Sanford was a young musical faculty member when he became the orchestra’s conductor in 1968.

One of Sanford’s goals was to expand the number of musicians. He recruited music teachers from within a 50-mile radius. When his second season with the orchestra began, Sanford’s 66 players included professional musicians, college and high school students, and amateurs.

Sanford, along with the symphony’s guild and board, launched a vigorous campaign to increase audience numbers and by 1969, crowds of about 500 were attending concerts.

MSO’s fifth conductor, pianist Hermann Herz, came to Mankato in 1970. Herz was born and educated in Munich. He’d held positions at the Munich Opera and St. Gallen Municipal Theater in Switzerland before he immigrated to South Africa where he was a conductor in Johannesburg.

After Hertz died in 1981, two interim conductors filled in to finish the season. Scheuerer returned for one year; then Jere Lantz took over.

In 1983, Dianne Pope was selected as MSO’s conductor after a rigorous search produced more than 100 applicants from 32 states and two countries.

Her first MSO conducting gig was in front of 3,000 elementary school children, an event that marked the beginning of a commitment to the musical growth of the areas youths.

His background included a master of music degree from Yale and membership in the Minnesota Orchestra.

During his time as MSO’s conductor, Freed collaborated with many community groups.

The orchestra is now interviewing for a new conductor.

In December its executive director, Hannah Bretz, stepped down. Musician and educator Bethel Balge is serving on an interim basis.