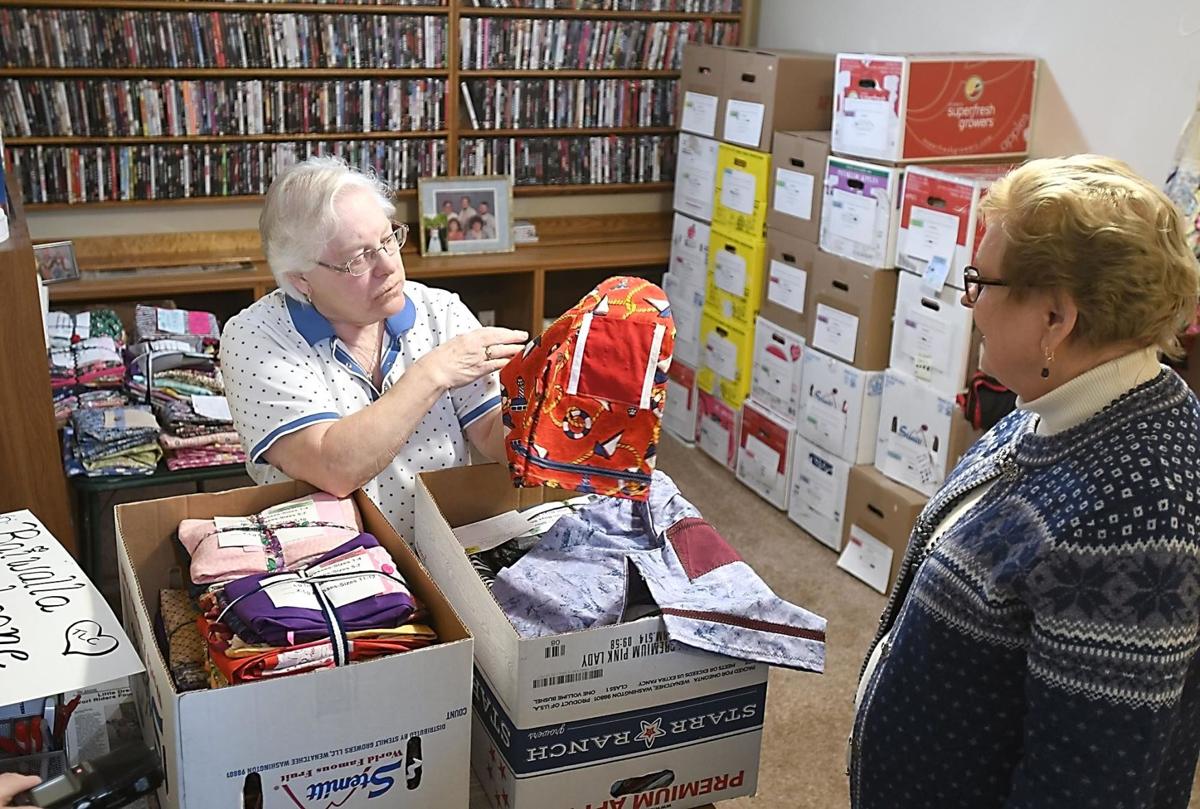 Mary Warner (left), of New Ulm, displays some of the dresses she’s sending with Ann Carlson to Sierra Leone on a mission trip. 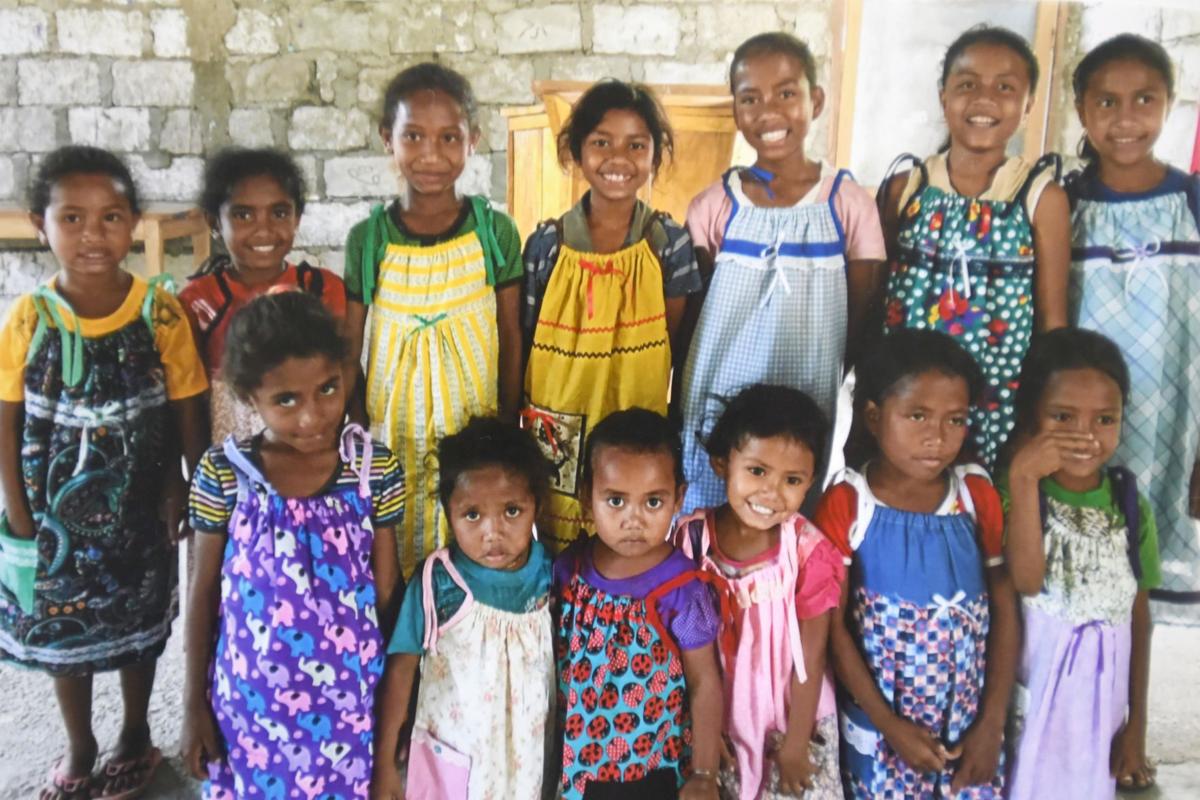 Children in Indonesia wear some of the dresses made by Mary Warner and her group of volunteers. 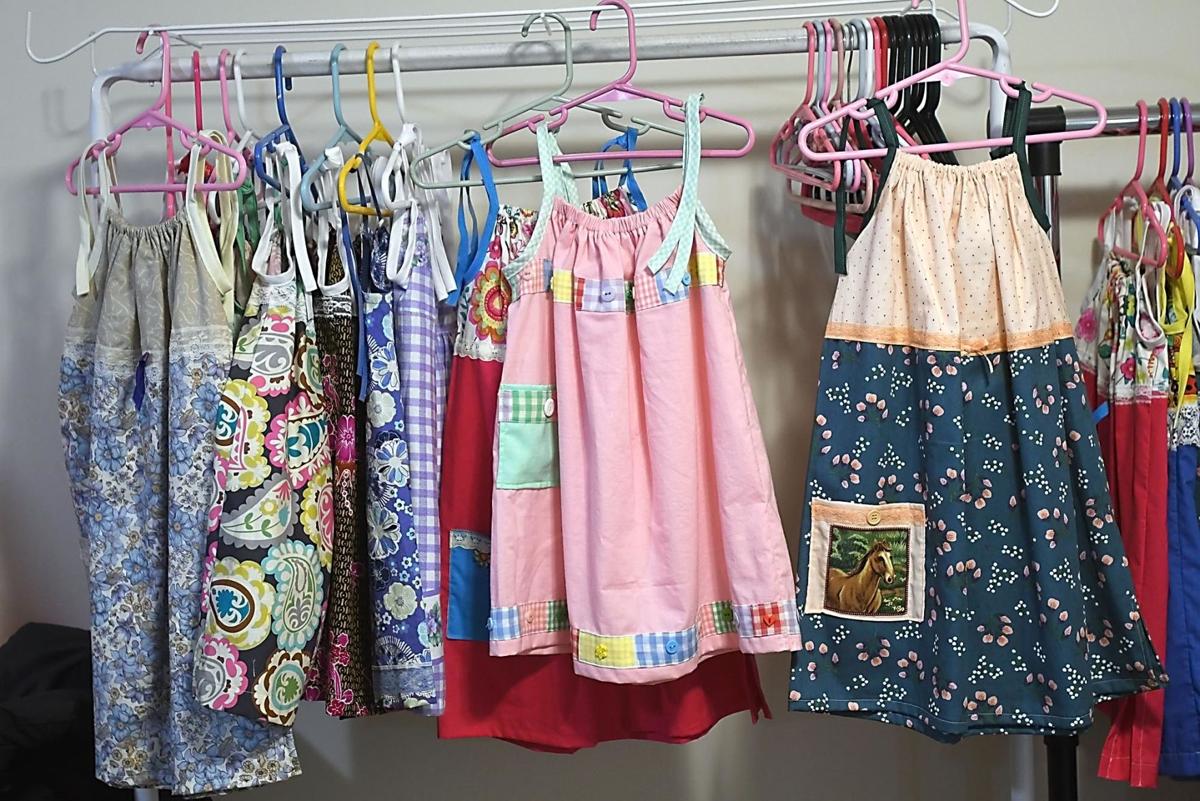 A variety of children’s dresses hang in Mary Warner’s basement, waiting to be shipped abroad. 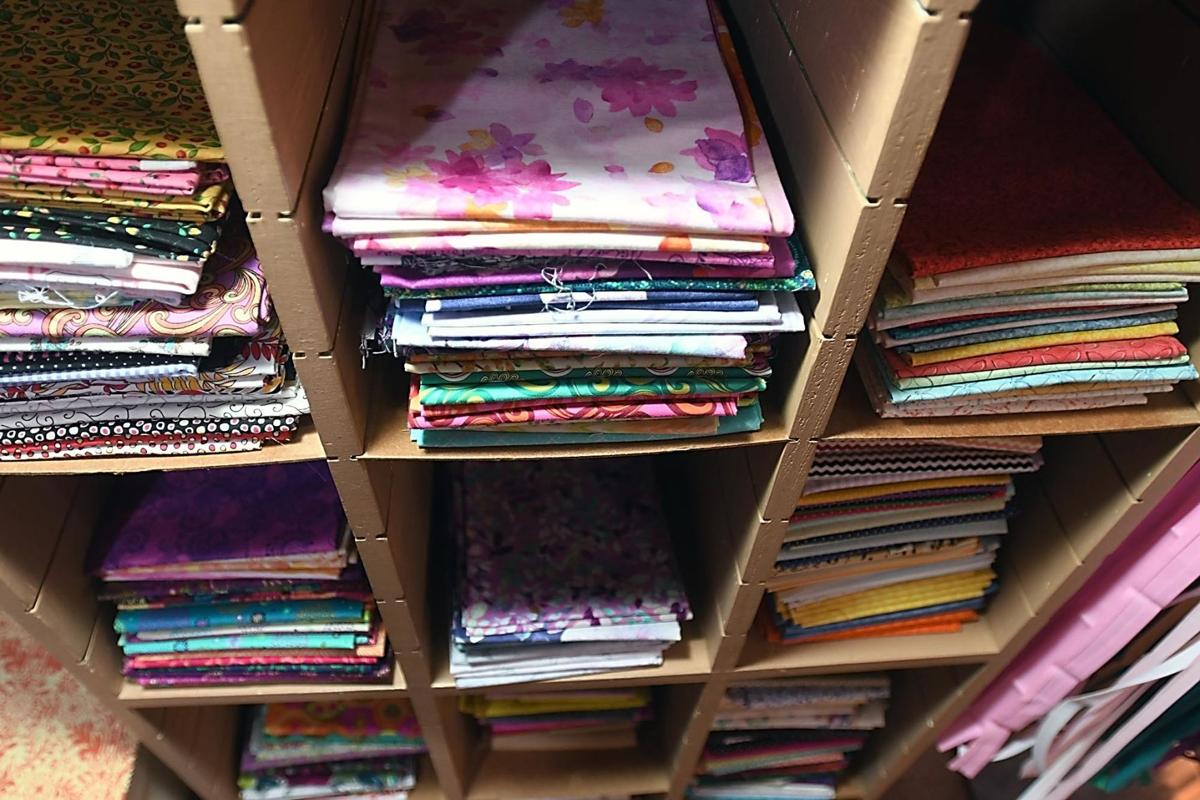 Different fabrics wait to be turned into Little Dresses.

Mary Warner (left), of New Ulm, displays some of the dresses she’s sending with Ann Carlson to Sierra Leone on a mission trip.

Children in Indonesia wear some of the dresses made by Mary Warner and her group of volunteers.

A variety of children’s dresses hang in Mary Warner’s basement, waiting to be shipped abroad.

Different fabrics wait to be turned into Little Dresses.

The 120 handmade children’s shorts and dresses of all sizes and colors were neatly folded, sorted and ready for pickup in boxes at Mary Warner’s basement on a late February morning.

By late March, those dresses and shorts will re-emerge 5,000 miles away in the West African country of Sierra Leone.

“Since we started in 2011, we have shipped close to 14,000 dresses and shorts to 27 different countries,” said Warner, who manages the nonprofit organization Little Dresses of New Ulm.

Those countries include some of the world’s poorest, from Haiti to Zambia and Honduras to Liberia. In Sierra Leone — where 60% of the population earns about $1.25 a day, according to the United Nations — a handmade dress is a luxury most can’t afford.

Warner first learned about the national organization Dresses for Africa from a Sleepy Eye woman who overheard a conversation about the nonprofit at a local thrift store in 2010 and was intrigued.

“One of the sewing ladies from Sleepy Eye showed me how to make my first dress,” Warner said. “The first few didn’t turn out so good, but the more you make, the better you get.”

She met with Kathy Austinson, director for senior programming of Community and Seniors Together — an organization that provides social opportunities for seniors in New Ulm — who connected Warner with volunteers who get just as much satisfaction from volunteering as the kids who receive the outfits.

In 2011, Warner and a couple of other volunteers sent in their first and only shipment to Little Dresses for Africa’s warehouse in Michigan but never found out where the dresses went and who was wearing them.

“We decided to go and do our own thing based off of what they do,” Warner said.

She first needed more fabric for the dresses, which comes from thrift stores and garage sales. When she reached out to fabric companies in New Jersey and California, they responded by collectively sending her 1,200 pounds of remnant fabric.

“They came in the biggest boxes you’ve ever seen,” she said.

The next step was reaching out to volunteer organizations that were doing charity work in developing countries to see if they had room to bring dresses with them.

Charity organizations such as Smile International and World Riders Foundation have brought her dresses abroad, and Ann Carlson, a volunteer with the United Methodist Church in Minnesota, will bring the Sierra Leone-bound dresses with her as part of an ongoing project to outfit a school there.

“Every single shipment has a story,” Warner said. “Many of them are written down. We’ve been keeping a scrapbook ever since we started with the stories on how the shipment goes, what the people say, and the notes we get back from the people going.”

Warner has sewn 1,800 dresses herself and works with 36 women — mostly in New Ulm but also in Mankato and Marshall — who sew dresses and shorts made from recycled and donated materials. Warner’s sister, Kate Laway, of Burnsville, manages a group of women in the Twin Cities area.

“It has grown and served so many women in this community,” Austinson said.

“That’s what we’re all about — supporting people who are aging in New Ulm. It gives them an outreach, and their ministry from the heart is made so much easier because of Mary’s organizational skills.”

To make it easier for the volunteers, Warner makes sewing kits that contain everything needed to make a dress or pair of shorts.

“The ladies who do the actual sewing can pick one of these up, take it to their house and sew on their own machine,” Warner said.

A few years ago, volunteer Marilyn Streit, a member of Holy Rosary Catholic Church in North Mankato, saw some of Warner’s dresses on display during a convention at the Roman Catholic Diocese of New Ulm. Knowing Warner was looking for materials, she donated 70 yards of fabric that belonged to her mother.

Streit and fellow church member Barb Wegscheid drove to New Ulm to see Warner’s operation firsthand, and before long, they were sewing dresses themselves.

“I think it’s wonderful to help, and there’s so much need out there,” Wegscheid said. “When I found out you could make those cute little dresses, it makes you feel good to know they’ve been used.”

The two typically pick up about 35 dress kits at a time to bring back to Mankato. When Streit posted about the organization’s need for fabric on the church bulletin, more than a half-dozen other women responded with not just donations but the willingness to lend their time and talents to sew the dresses.

“I had one gal do 50 over a summer,” Streit said. “It’s probably been 300-350 altogether. Once they’re done, three or four of us take them back over to Mary. She’s such an inspirational person. She’s so enthusiastic and the gals are always impressed with her setup. Then we go out to eat and make a day of it.”

Warner said she never thought the project would take off like it did and has no plans to stop. She said she’ll continue to sew dresses for children across the world as long as they can, with the help of volunteers who have become good friends.

“I’ve met hundreds of wonderful sewing ladies. They’re all talented and willing to help somebody else have a better life,” Warner said. “That’s basically what we’re all about. The pictures that we get from our travelers and the smiles on the faces of those little girls wearing our dresses is what motivates me to keep going and help others. It all comes from the heart.”