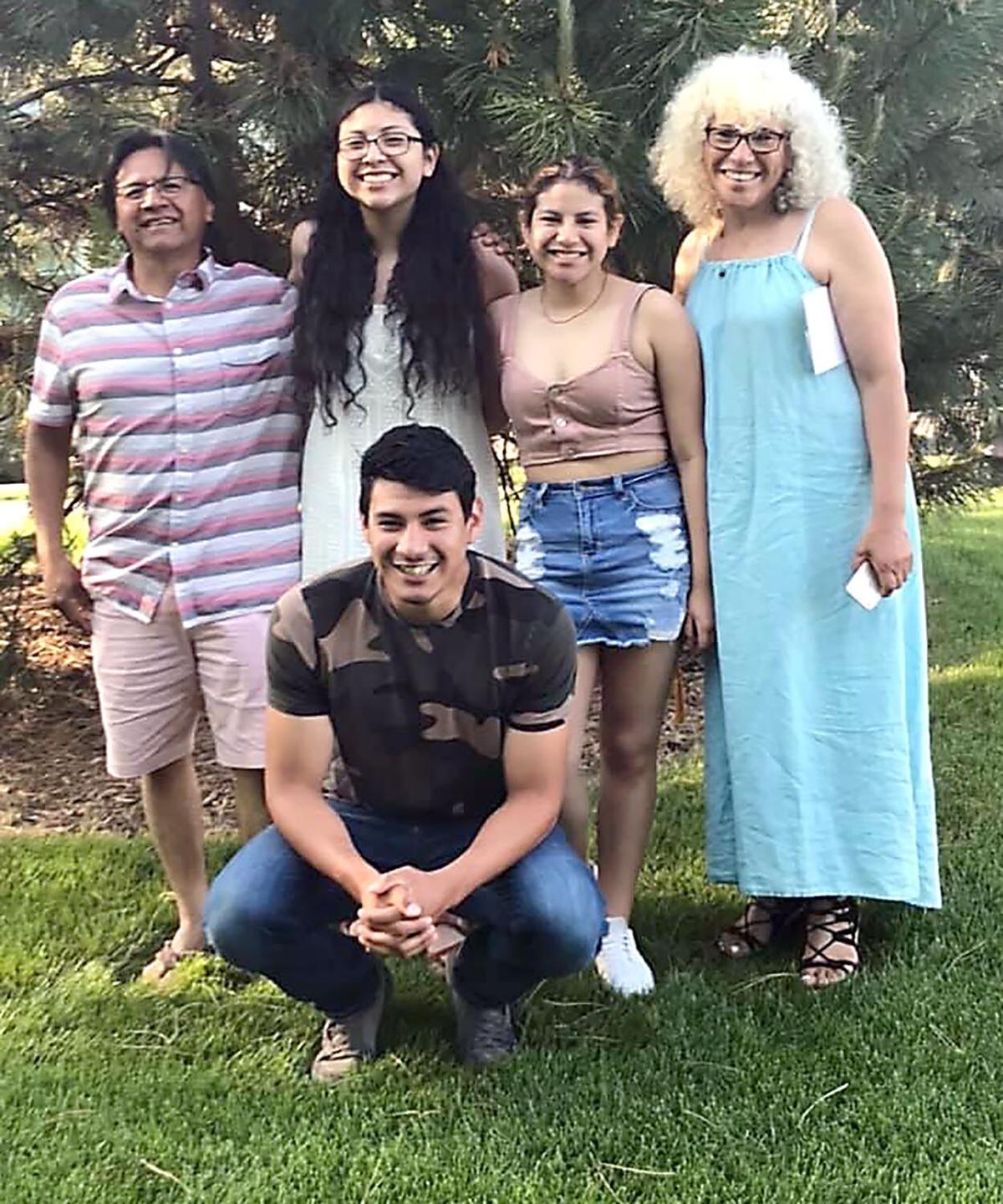 Gregorio Montejo (left) and Josefina Flandes Montejo (right), of Mankato, pose for a family photo with their son and two daughters. U.S. Immigration and Customs Enforcement plans to deport Gregorio Montejo to Mexico. 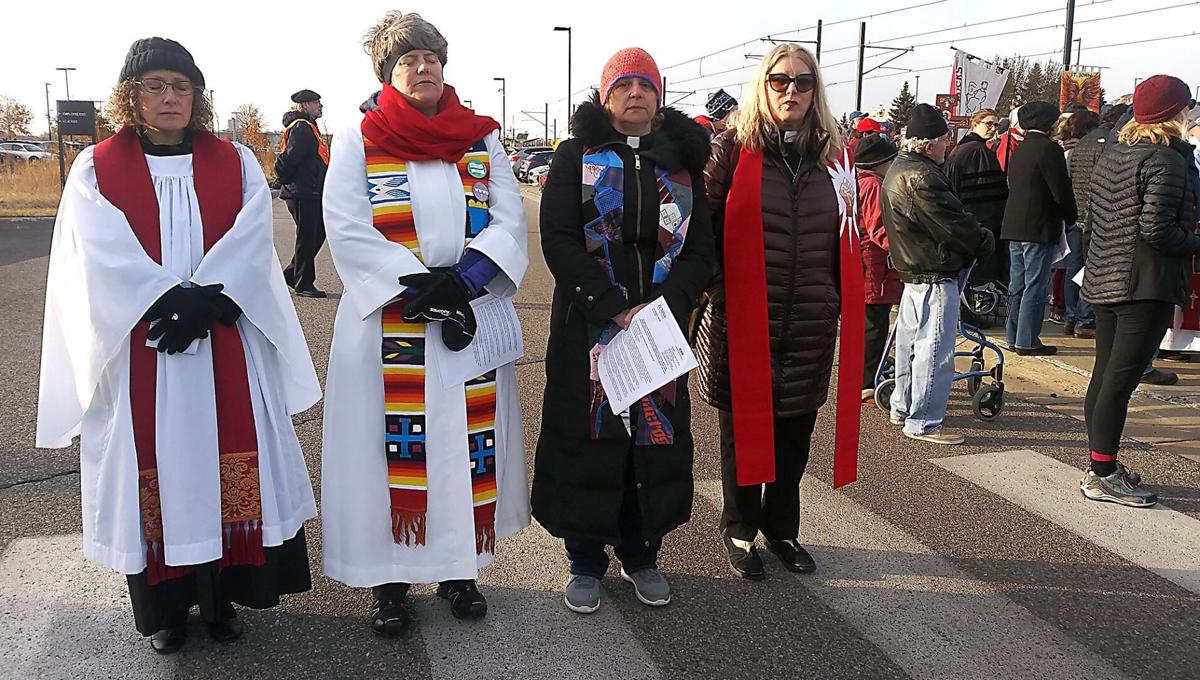 Leaders from the Interfaith Coalition on Immigration have been holding vigils this week in St. Paul for Gregorio Montejo, of Mankato, who is facing deportation by ICE. 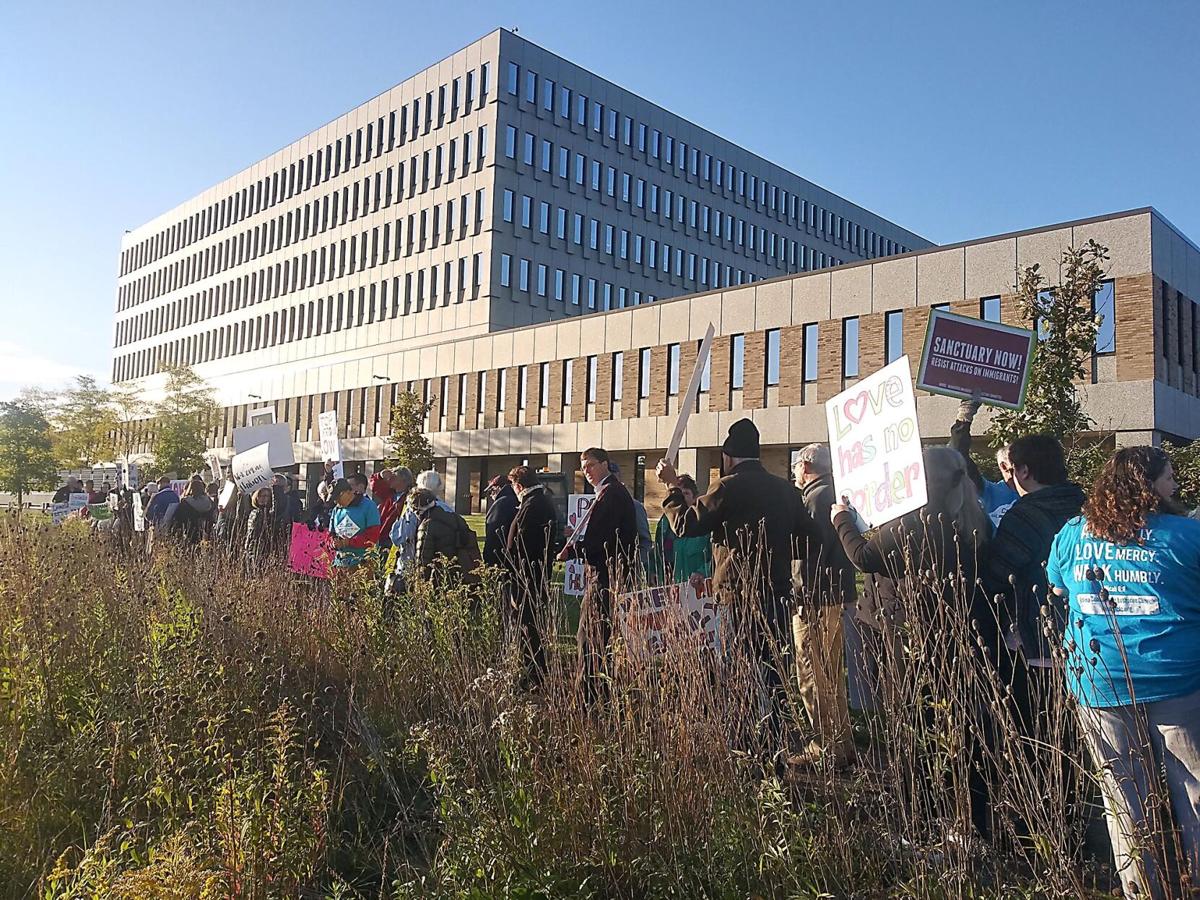 Activists in support of Gregorio Montejo and other immigrants facing deportation gathered at the Whipple Building at Fort Snelling this week, the regional headquarters of U.S. Immigration and Customs Enforcement.

Gregorio Montejo (left) and Josefina Flandes Montejo (right), of Mankato, pose for a family photo with their son and two daughters. U.S. Immigration and Customs Enforcement plans to deport Gregorio Montejo to Mexico.

Leaders from the Interfaith Coalition on Immigration have been holding vigils this week in St. Paul for Gregorio Montejo, of Mankato, who is facing deportation by ICE.

Activists in support of Gregorio Montejo and other immigrants facing deportation gathered at the Whipple Building at Fort Snelling this week, the regional headquarters of U.S. Immigration and Customs Enforcement.

MANKATO — It was supposed to be a day of celebration but instead became a nightmare.

On Tuesday, Josefina Flandes Montejo, of Mankato, was attending her daughter’s graduation ceremony at Minnetonka High School when she got word that U.S. Immigration and Customs Enforcement was deporting her husband, Gregorio Montejo.

For months, the Montejo family’s lawyers, along with state and federal lawmakers and faith leaders, have been trying to convince officials at the regional ICE office in St. Paul to let Montejo stay in the country.

He has been detained since his November 2019 arrest for drunken driving by a state trooper in Nicollet County. When his family went to the courthouse to post bail, they were told he had been taken into ICE custody. He was then transferred to the Sherburne County Jail near St. Cloud.

The DWI was his 2nd, and culminated after a trying time for the family. In 2015, their daughter Monica told her parents she had been sexually abused by a cousin when she was younger. Her father and mother believed her, but the cousin denied it, dividing the family. When the detective investigating the case declined to prosecute, Monica Montejo said her father began to drink to cope. In 2018, his son was deported to Mexico.

“My dad got depressed,” said Monica Montejo, who along with her sister, is a U.S. citizen. “He just felt overwhelmed and made the mistake of drinking and driving.”

Attorney Kim Hunter, of St. Paul, has been working with the Montejo family for about four years, ever since they moved to Mankato from Worthington. Although Gregorio Montejo came to the U.S. undocumented, the abuse suffered in his family made him eligible for a U visa, which gives immigrants legal status if they have a family member who is a crime victim.

But those visas are capped at 10,000 a year, creating a backlog that can extend for years. The DWI led to deportation proceedings, but Hunter as well as a growing number of lawmakers have spoken on his behalf. Also supporting Montejo is Chankaska Creek Ranch and Winery in Kasota, where Montejo had been working for four years prior to his 2019 arrest.

“He was fantastic, super hardworking, diligent and very pleasant to work with,” said Michael Drash, former vice president of winemaking until last month, when he moved to Virginia to manage a vineyard there. “I’ve spoken on his behalf quite a few times.”

He was shocked when prosecutors said his former employee was a threat to society.

“That was very hard to hear, especially when his daughters and son were in the courtroom, too,” Drash said.

Rep. Jack Considine, DFL-Mankato, joined Mankato Mayor Nasjwa Massad in advocating for a stay of deportation, reaching out to U.S. Sen. Amy Klobuchar’s office to ask for help in his case.

“This has got to be one of the stupidest things I’ve ever run across,” Considine said. “You’re going to deport a guy for a DUI who has a good job supporting his family and you’re going to take away the family’s breadwinner.”

Considine confirmed the Le Sueur County Attorney’s Office’s willingness to enroll him in drug court, which opts for treatment for substance abuse, therapy and regular check-ins instead of jail, allowing Montejo to continue working while getting help.

Considine then called Massad, who also made calls to Klobuchar’s office. She was surprised the decision from ICE to deport Montego came so fast. His lawyers and family weren’t expecting a decision until Thursday.

“You just get that sick feeling when you hear that,” she said. “I was surprised by how fast it went.”

U.S. Sen. Tina Smith also spoke on Montego’s behalf, contacting the regional ICE office in St. Paul to try to convince them of the harm his deportation would cause the family. In a statement following ICE’s decision to deport him despite pleas from lawmakers, family and friends, Smith said she was deeply disappointed ICE denied his request to remain in the country while awaiting a decision on a U visa to give him permanent status.

Nicky Leingang, a staff member at U.S. Rep. Ilhan Omar’s Minneapolis office, said Montego’s deportation will have a ripple effect on his family.

“As Americans, we must recognize that we’re splitting up families,” Leingang said. “We are impacting life-long U.S. citizens like Monica, who once attended school in our district before having to abandon that dream to support her family.”

The National Honor Society granted Monica Montejo a scholarship to attend the University of Minnesota for her leadership skills and high GPA. She had been living in the Twin Cities while attending college but returned to Mankato in December to work and help pay the bills when her father was detained. Now that he is being deported, her future at the university is even more uncertain.

“Currently, it’s just myself and my sister supporting my family, and I also support my brother in Cancun who was deported awhile ago,” said Jose Montego Flores, Monica’s brother and Gregorio Montego’s son. “It’s been very frustrating for my family, financially as well as mentally — and it’s taking its toll.”

Gregorio Montejo, who is set to be deported Wednesday morning, is still holding out hope that ICE will reconsider, and the family is encouraging people to contact ICE Field Office Director Shawn Byers at 612-843-8600.

Daniel Romero, minister of faith formation at the First Congregational Church of Minnesota, is a volunteer with the Interfaith Coalition on Immigration, which advocates for the rights of immigrants and refugees in Minnesota. He and other faith leaders held a vigil Tuesday at the ICE regional office in St. Paul to raise awareness of Montejo’s case and for all immigrant families facing separations. Those vigils will continue, he said.

“Gregorio’s not on the plane yet,” Romero said. “ICE can still do the right thing.”

When asked why ICE decided to deport him, ICE and DHS public affairs officer Shawn Neudauer said in an email, “unfortunately, ICE can share nothing on this matter.”