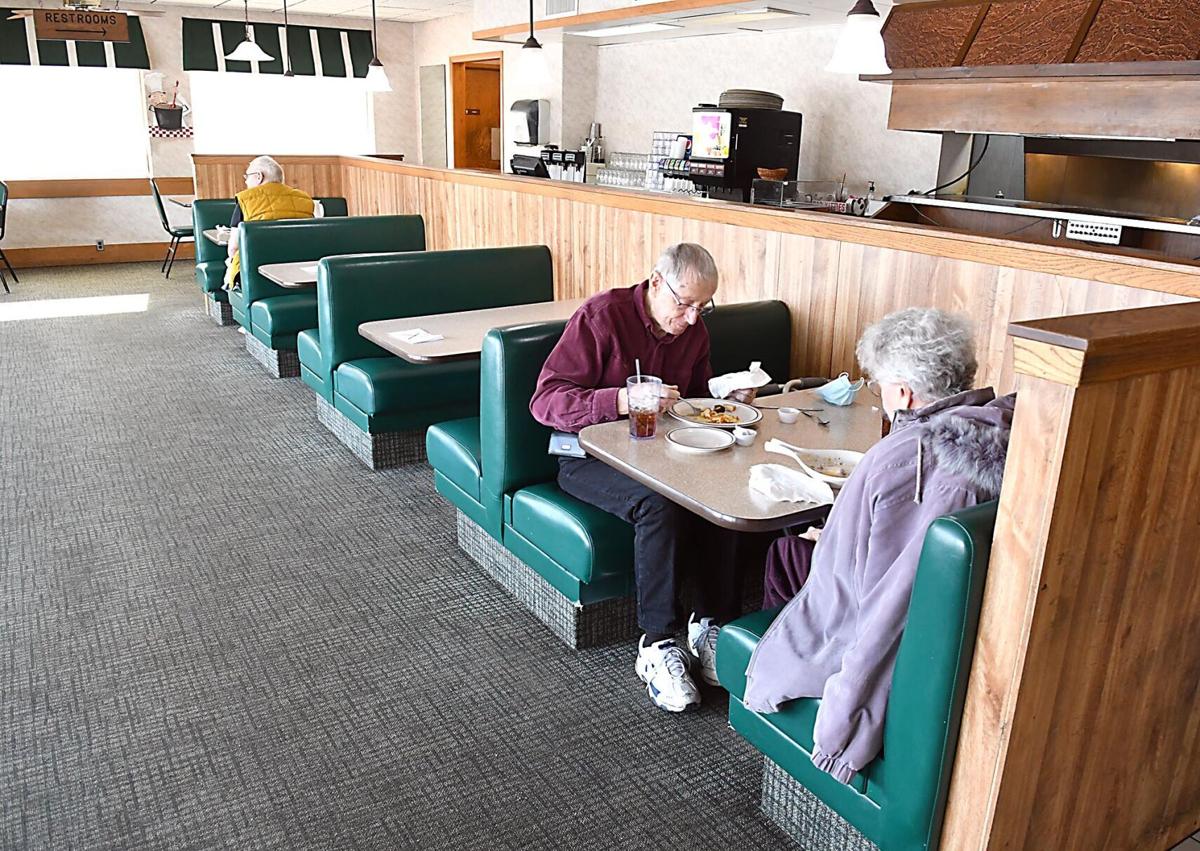 Chuck and Audrey Schubbe had some extra space around them as they enjoyed a breakfast together Monday at Happy Chef on the first day of eased restrictions on indoor dining in Minnesota. 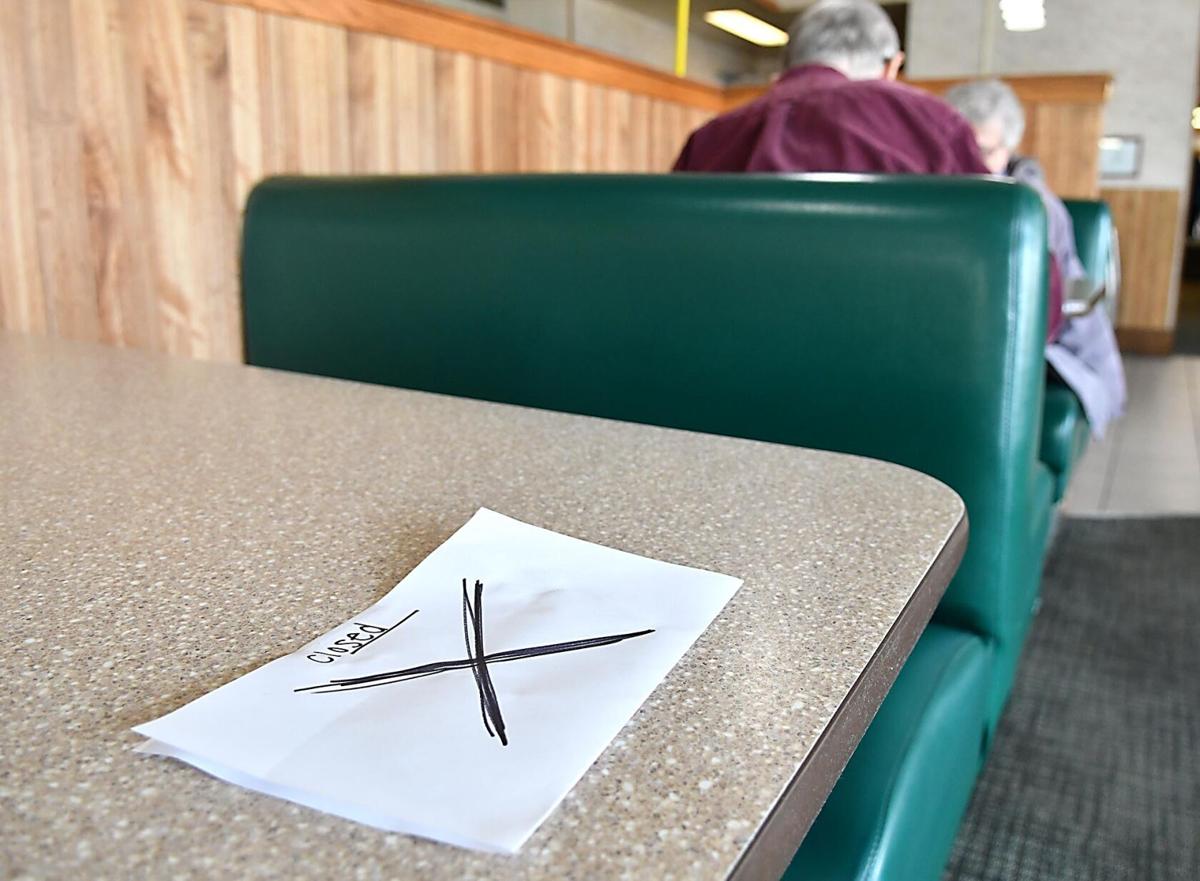 Alternate booths are marked closed to allow for social distancing at Happy Chef.

Chuck and Audrey Schubbe had some extra space around them as they enjoyed a breakfast together Monday at Happy Chef on the first day of eased restrictions on indoor dining in Minnesota.

Alternate booths are marked closed to allow for social distancing at Happy Chef.

MANKATO — Joann Brauch and Peggy Wibstad, digging into eggs, hash browns and all the sides at Happy Chef Monday morning were happy to be able to get together — especially to get out of the house.

“I’m glad they’re open. It gets tiring being home so much,” Wibstad said.

Restaurants and bars opened their doors to in-person service Monday for the first time since mid-November when Gov. Tim Walz ordered a second round of closures because of the COVID-19 pandemic.

“Once a month us girls get together here. The food is good,” Brauch said of a group of friends who have long met at the iconic Happy Chef.

“We’re having Christmas, too,” Brauch joked, holding up a gift bag on the table.

Al Johnson also was enjoying breakfast at the Chef. “It’s about time. The shutdown has been mishandled from the start.”

He usually stops in on weekends but had time to come in on their first day of reopening. “It’s nice to have them open again.”

Adrian Swales, who was a manager at Happy Chef before taking over the business a few years ago, said it’s a relief to be open for more than just takeout and delivery.

“It’s very nice. We have our regular coffee people who are super happy we’re open again. We have a strong contingent of regulars. When we had to shut down, they had nowhere to go for coffee and breakfast.”

He kept some staff during the shutdown to do takeout and delivery. “We definitely weren’t swimming in gold coins from takeout, but it is what it is. Like everyone in hospitality, we’re just trying to stay afloat.”

Swales said customers did what they could to support him and his staff during the shutdown.

“I had a table of customers in this morning, since November they’ve been eating two or three carry-outs a week. People who maybe came once a week stepped up and came in two or three times a week for carry-out.

Swales said it was more difficult having to lay off some of the staff during the second shutdown. “That was the hardest, knowing they didn’t have a safety net. Last time they had the extra $600 in unemployment, but this time they didn’t have that. It was painful to do.”

He said they’re fortunate to have a large restaurant, including a banquet room in back, that makes the required social distancing easy. “I can seat several dozen people where they won’t even be 12 feet from each other.”

The Loose Moose Saloon & Conference Center is normally closed on Mondays so Mike Maes and his staff were gearing up for Tuesday’s opening.

“We’re putting the final touches on everything, and we’re ready to rock and roll. The staff is antsy and eager to go back to work. Hopefully things will stay good (with COVID cases) so we don’t have to shut things down again.”

The Loose Moose has been doing takeout and delivery. “We sold a lot of food but we missed out on the alcohol sales,” Maes said of the sales that bring higher margins for bars and restaurants.

He said beer distributors Locher Bros., Tow Distributing and Schell’s have been scrambling to stock his business and all the other bars and restaurants. “The day after the governor made the announcement, they were all in here stocking us up.”

With plenty of room, Maes said, they will be able to accommodate plenty of spaced-out tables, with a limit of six people per table.

At the bar people must be seated, and there can be no more than two people next to each other with a 6-foot distance between them and other patrons.

Maes said the Loose Moose could safely accommodate 150 people, the maximum allowed under the latest orders. “But I’ll take whatever we can get, whoever comes in right now.”

The nearby Mettler’s Bar, also run by the Maes family, reopened Monday at 4 p.m. Under the governor’s latest orders, all bars and restaurants must close at 10 p.m.

The topless dancers at Mettler’s have a bit more on than usual. “The dancers have to wear masks. There are temperature checks and screenings. We’re doing everything we can to keep everyone safe,” Maes said.

At The Landing on the shores of Madison Lake, customers were coming in for breakfast and lunch.

Riann Dietz said that at this time of year business starts picking up as more anglers take to the lake.

“We’re just starting to get the fishermen out here. We usually get a good crowd.”

They have been open for takeout and delivery and will continue to offer those services.

Dietz said the owner and staff have been toying with ideas to generate more business during restrictions on occupancy in restaurants and bars.

“We haven’t had outside service yet, but we want to do something.” One possibility is to have some fish houses set up outside The Landing where people could have a meal in a unique atmosphere — an idea some other restaurants in the state have tried.

She said they’re also toying with the idea of perhaps delivering pizzas or other food to ice houses on the lake.

For now, Dietz is just happy to have customers coming through the door. “It feels good to be able to serve people again.”