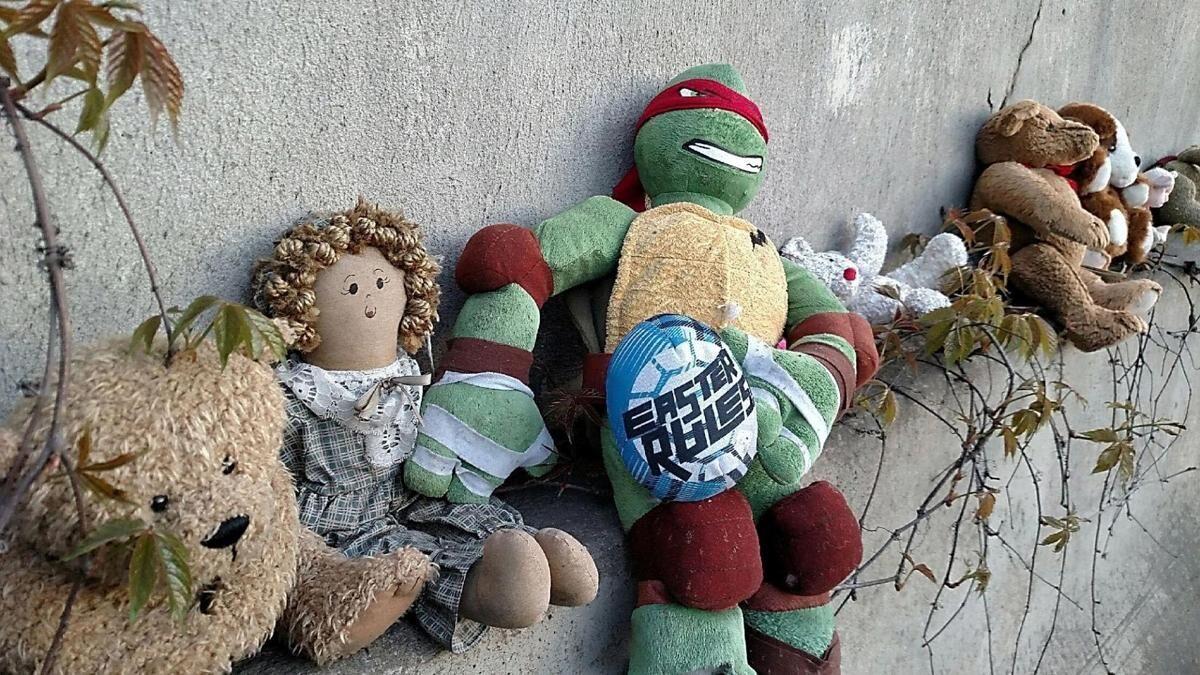 Donny Hiniker gathered a variety of faded stuffed toys for a display he created along a Highway 169 ramp.

Friends' stories about the late Donny “Bondo” Hiniker include one about a display of misfit toys that he anonymously placed on a highway ramp in 2016.

MANKATO — “Everybody has a Donny story,” said Leroy McClelland, describing the legacy of his South Bend Township neighbor.

Until recently, the tale of one of Donny’s public projects was known to only a handful of his confidants, including McClelland. Donny’s secret was that he was the anonymous artist behind Mankato’s highway on-ramp of misfit toys.

A writer’s question in a 2016 Free Press Ask Us column called for a mystery to be solved regarding an “odd sighting” along a Highway 169 ramp near the CHS soybean processing plant. A strange variety of toy people and animals appeared there that included a creepy plastic doll missing its feet, a Valentine bear, Santa bunny, a zebra, a gorilla, the Count from Sesame Street — Ask Us Guy’s list ended at 72 windswept and faded toys.

“He was the one who put them there. We gave him the toys,” McClelland said.

Neither Ask Us Guy or Mankato’s then-city manager figured out the origin of the strange display that was eventually removed by the Minnesota Department of Transportation.

“We do need to remove distractions. It’s our job,” MnDOT’s Rebecca Arndt told Ask Us Guy. Arndt hoped her department wasn’t offending anyone.

Donny was not someone who held grudges. Apparently, he wasn’t big on writing artist’s statements about his impromptu displays.

“He never said why he put the stuffed animals out there — it was just something he wanted to do,” Greg Hiniker said. “It made him laugh and he liked to make people laugh.”

Strangers and friends both received bumper stickers created by Donny that promoted car-related products such as “Gray Primer.”

His family does not yet know the cause of death. Greg said he does know his late brother, who had been diagnosed with schizophrenia, had lots of friends and he was above average in intelligence.

“He struggled for years, but never let that (the illness) deter what he wanted to do. It didn’t keep him from getting out into the world.”

McClelland said he had to put limits on how many visits Donny could make per day. That didn’t mean his family didn’t like their neighbor. “My son really loved his cars.”

Tom Ferguson, of rural Mankato, who plays bass, helped Donny with a few music projects. Ferguson spoke daily with his friend, often about Donny’s rewrites for a self-made movie in the works.

“He was writing a script and he’d call me at all hours ... A lot of people thought Donny was weird. I knew him before he got sick, and I could tell when he was having an episode. He lived in his own world, which I respect.”

“I’m not sure what that’s all about, but they seem to have a sensitivity level that not everybody has. Donny had a heart of gold. Over the years, he decaled a lot of my cars. Right now, if you went by my place, you would see a maroon van with a million flames.”

In 2018, Donny showed off his Frankenstein of a Pontiac Grand Prix at a car show in Lake Crystal. Other entrants had added chrome to their vehicles’ wheels; he’d attached paper plates. Others cut away hoods to show off aftermarket air intakes; he’d attached a Batman-theme plastic engine.

“The center of the hood is a ’94 Camaro. A buddy of mine found it in a ditch,” he told The Free Press. “It beats walking.”

He used colored duct tape and electrical tape to make most of the stripes on the Camaro, a technique he called “low-dollar customizing.”

Donny studied auto mechanics and body work at Mankato Technical College, worked for several businesses in Mankato and, for a time, had an auto and body repair shop on Riverfront Drive.

He attended public schools in Rapidan and Garden City. His empathy for others, as well as his fondness for creativity and putting on a show, had been evident since he was a young teen, according to Chad Roemer’s remembrance on an online obituary:

“Donny created a void with his passing. Forty years back he skateboarded up and down the hospital corridor to cheer up my brother who had broken his legs. This was my first Donny experience.“