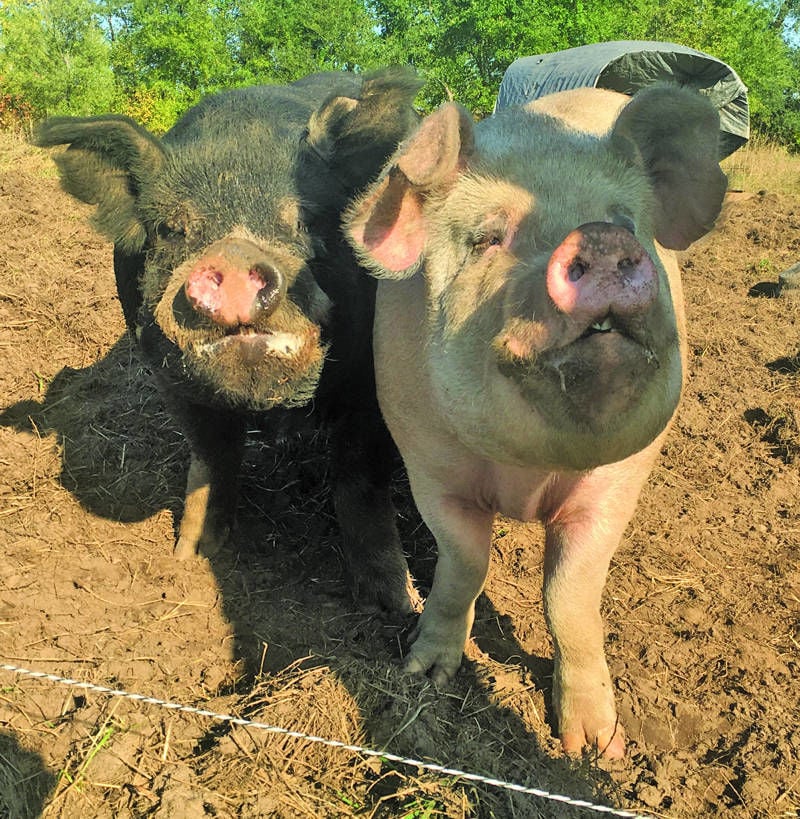 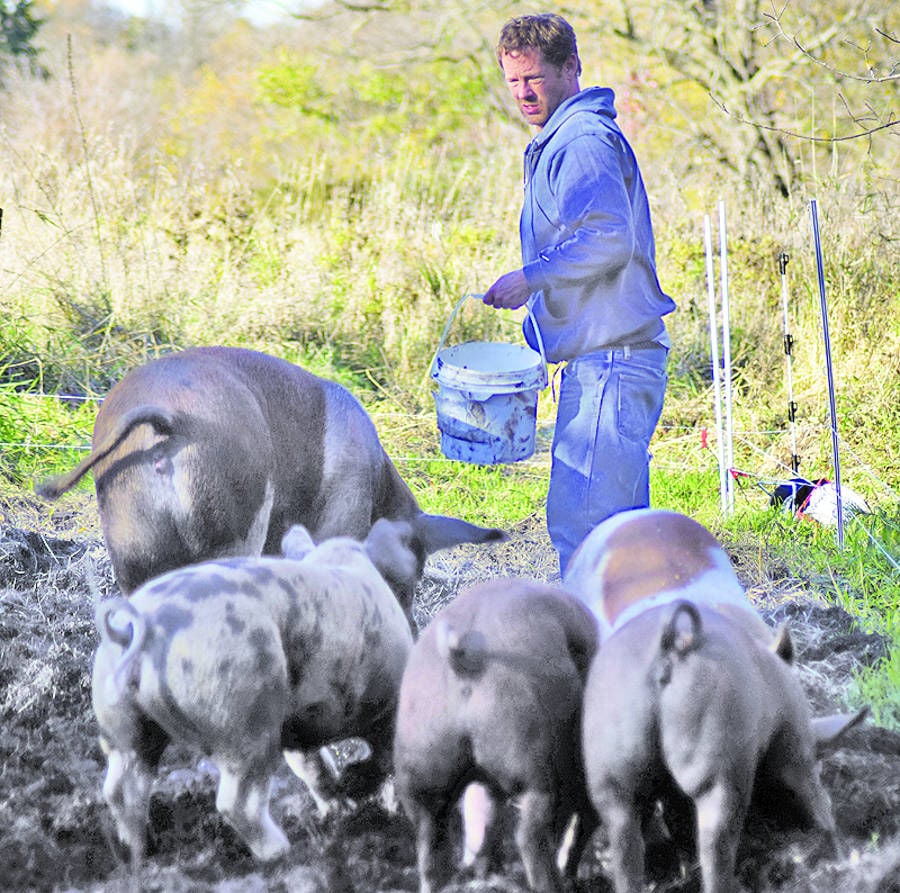 While the pigs eat grass, Andy supplements their diet with a feed ration to help them thrive. 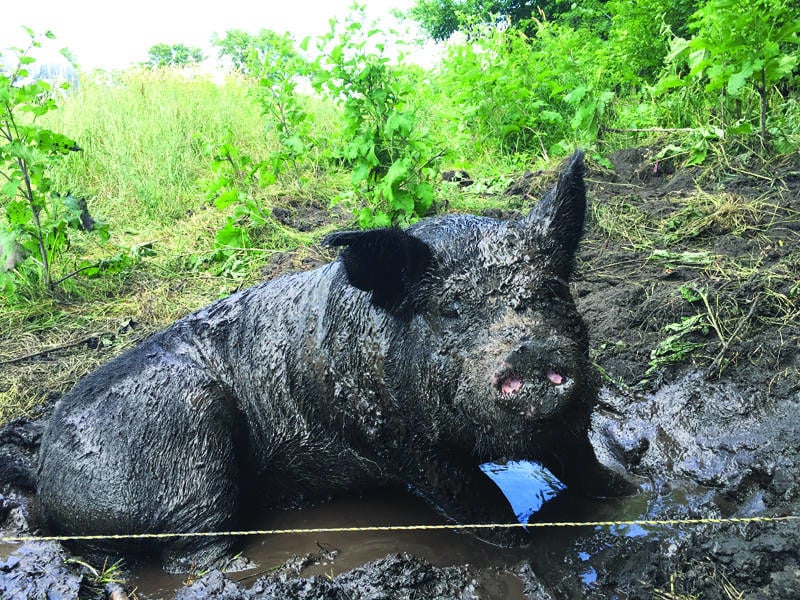 This Berkshire boar has sired the farm's piglets for the past two years. 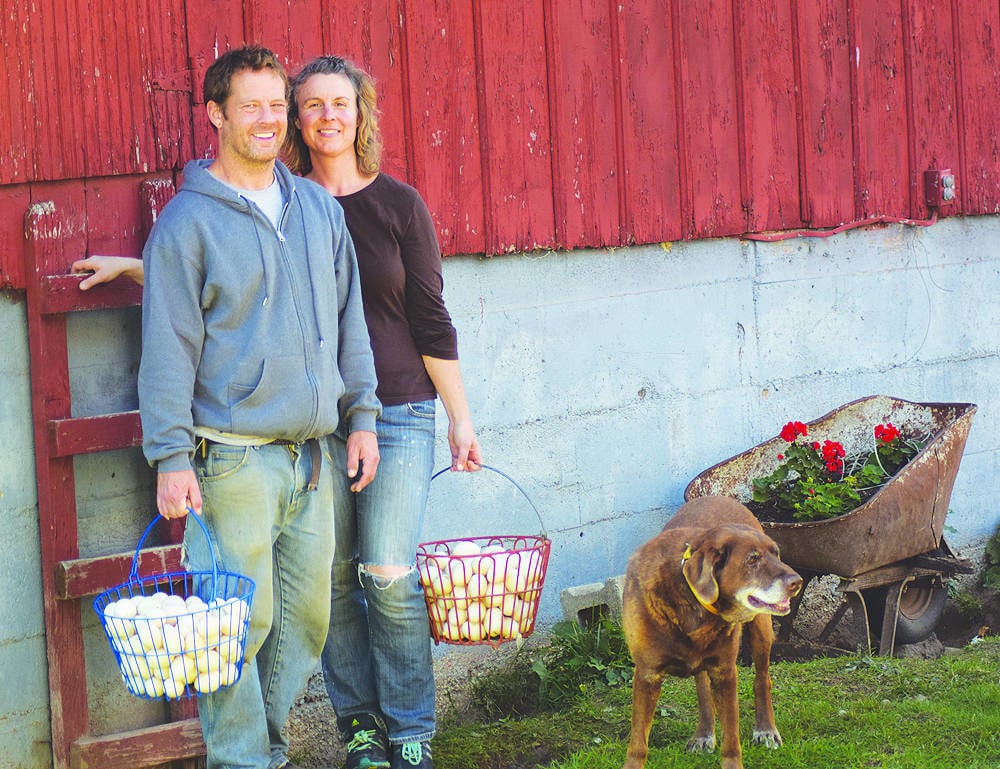 In addition to pasture-raised pork, Tiffany Tripp and her partner Andy provide customers with chicken and duck eggs, along with pasture-raised broiler chickens. 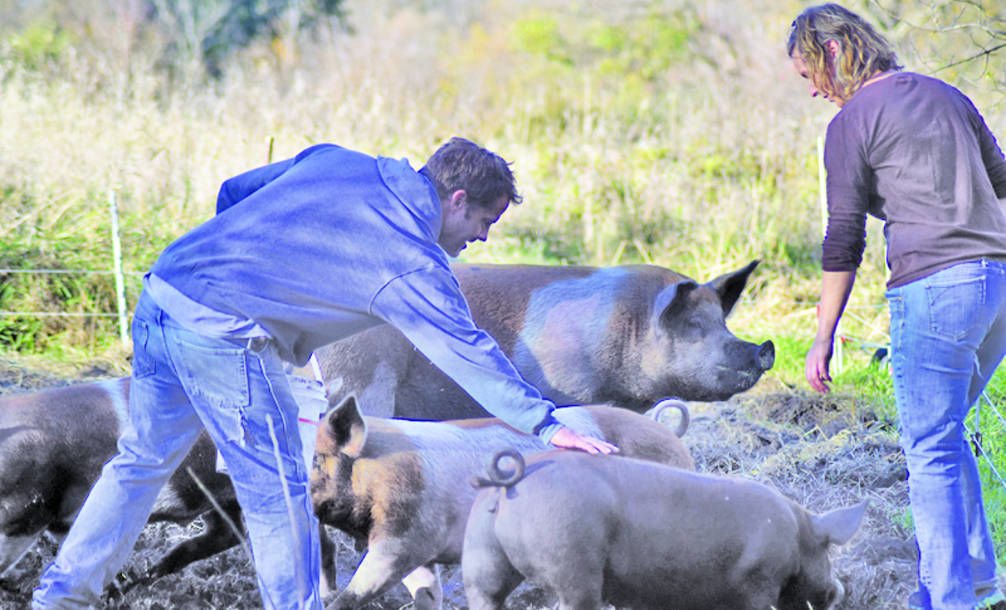 Tiffany Tripp and her partner Andy raise their hogs on pasture. They use portable fencing and move the pigs every week or two to a different paddock. 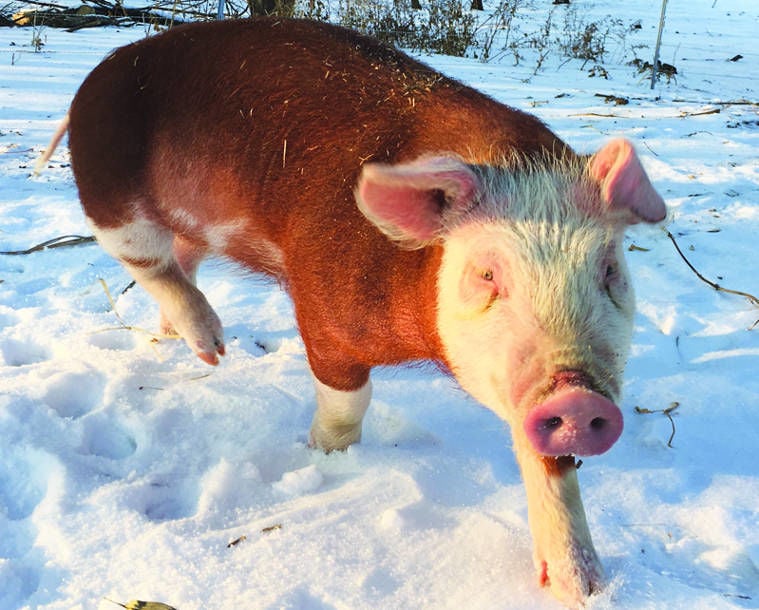 FARIBAULT, Minn. — In the 1940s and ’50s, Tiffany Tripp’s grandparents operated a diversified livestock farm on the family’s land near Faribault. Later, following a national agricultural trend, Tiffany’s parents converted the family farm into a specialized dairy. The farm is still in the family and Tiffany, and her partner Andy, are now working hard to build a farm business that looks like the farm her grandparents worked.

“I moved back to Faribault five years ago and Andy and I have made this plan together,” Tiffany said.

The plan is to build a farm business around three central enterprises; pastured pork, free ranging chickens, and free ranging ducks. The duck and poultry enterprises are pretty much in full swing for the couple.

“We raise chickens for eggs and Cornish Cross and Red Ranger chickens for broilers,” Tiffany said. “We also raise ducks for eggs. We started with about ten laying ducks a couple of years ago and now we have around two hundred ducks. Most of them are White Layers and Golden 300 Hybrids.”

The chicken laying flock is a mixed flock of Barred Rocks, Red Sex Link, and Americaunas. That gives Andy and Tiffany’s “Local Yolks” brand chicken eggs a colorful and attractive mix in their cartons. The duck eggs are also colorful.

“We have a few Khaki Campbells and Indian Runners ducks,” Tiffany said. “Some Indian Runners lay a blueish-green egg. Adding a little color to the eggs creates great conversation at the farmers' markets and gives us a chance to explain to people that not all eggs are the same and that different breeds lay different colored eggs.”

Compared to the chicken and duck enterprises, Tiffany and Andy have taken a more incremental approach to their pastured pork enterprise. To get started, they got a leg up from the Sustainable Farming Association of Minnesota.

“When we were starting to farm, we didn’t know much about pigs,” Tiffany said, “so we took a Farm Skills 101 class put on by the Sustainable Farming Association. We learned a lot about fencing options and visited another farm similar to ours.”

Then, three years ago, they purchased some four- to six-week-old weaner piglets from an old 4-H friend. The piglets were put out to pasture in the couples’ newly-created paddocks. They use easy-to-move portable fencing for the paddocks.

“We set the paddocks up using poly wire,” Andy said. “We use two wires for the little pigs and one wire for the breeding stock. Depending on where they are located, we use either a solar or a plug-in energizer.”

“The reason we use two wires on the younger pigs is that we want a wire to be at eye level,” Tiffany said. “Then we want one that’s higher for predators.”

Tiffany says that the pigs have to learn to respect the electric wire. The pigs are moved every week or two to a different paddock.

“The size of paddocks depends on how many trees and buckthorn brush there is, and how big the pigs are,” Andy said.

“We’re lucky we’re on land that has quite a few trees,” Tiffany said. “Sometimes that’s to our benefit and other times not. The trees can make putting up a paddock more complicated, but they provide shade.

If there is not natural shade, Andy and Tiffany have a portable pig hut which can provide shade and keep the pigs out of the elements in bad weather.

“The portable pig hut has a 10-by-14-foot base with removable wheels and two cattle panels folded over it,” Tiffany said.

A tarp covers the cattle panels of the hut.

“The hut is pulled manually and no tractor needed,” Tiffany said.

“When they’re on pasture, we feed them a pig ration to help them thrive. But they are more than happy to eat the grass, especially if there’s a patch of nettles,” Andy said. “They really go after the nettles. They eat the tops and the roots and till up the ground.”

Andy says that the pigs had access to free choice pig ration for the first two seasons, but now they are on a controlled ration based on their weight. “They gain just as much and we’re saving on feed costs,” he said.

A few days before they move the pigs to a new paddock, Andy and Tiffany hand-sow a pasture mix made up of grass, legume and forb seed into the paddock that the pigs are rooting in.

“They will stomp it in and help plant that seed,” Andy said. “If you give them a good day to two days to stomp it in, the paddock will grow back more quickly.”

The couple purchased weanlings for two seasons. Then, in 2017, they purchased a couple of older Duroc/Yorkshire sows and tried their hand at farrowing. It went pretty well.

Andy and Tiffany finished 15 pigs this year and sold them all to customers as custom-processed whole or half hogs. The hogs were butchered by Krenik’s Meat Processing from Montgomery and Valley Natural Meats of Northfield.

Tiffany said they really liked Krenik’s because of the plant’s small size and their top-notch smoking process. Valley Natural Meats was an inspected facility and allowed Andy and Tiffany the option of selling individual cuts of meat if needed. It closed in January, however.

The couple uses a very diverse system of marketing to sell their pork and other farm products. They range from farm tours, farmers markets, advertising in the Minnesota Grown directory, and participating in community events such as “A Taste of Faribault.”

“Being out in the community has really been an important part of letting people know what we’re doing,” Tiffany said.

Tiffany and Andy’s five-year plan calls for continuing their marketing efforts and to increase sales to 40 direct-marketed feeder pigs per year. This year, they acquired three Hereford gilts that will become their future breeding sows.

You can learn more about Tiffany, Andy and Graise Farm by visiting www.graisefarm.com.

Hereford pigs are efficient and thrifty on both pasture and grain diets, according to Tiffany of Graise Farm. They are also mild-mannered and therefore fairly easy to manage in the pastured pork farming system that Tiffany and Andy use at Graise Farm.

“Hereford cattlemen were so keen on the new breed of swine that the Polled Hereford Cattle Registry Association sponsored the formation of the National Hereford Hog Record,” writes The Livestock Conservancy.

Oklahoma State University describes what the Midwestern farmers who developed the breed were looking for in the coloration of their foundation stock:

“In order to be registered in the National Hereford Hog Record Association, an entrant must … have a white face, not less than two-thirds red exclusive of face and ears, with at least two white feet — white showing not less than one inch above the hoof. They must be red in color, either light or dark red. The shade of red may vary from light to dark, but a deep red color is preferred. An animal that has a white belt or carries more than one-third white, exclusive of the head and ears, is not eligible for registration and cannot be exhibited. Hogs with swirls are not eligible for registration.”

Herefords were a fairly popular breed with farmers until the 1960s and ’70s. At that time, the breed’s numbers began to decline due to the industries’ focus on a three-way cross of the Duroc, Hampshire and Yorkshire breeds. The Livestock Conservancy estimates that there are fewer than 2,000 purebred Hereford swine in the United States today.