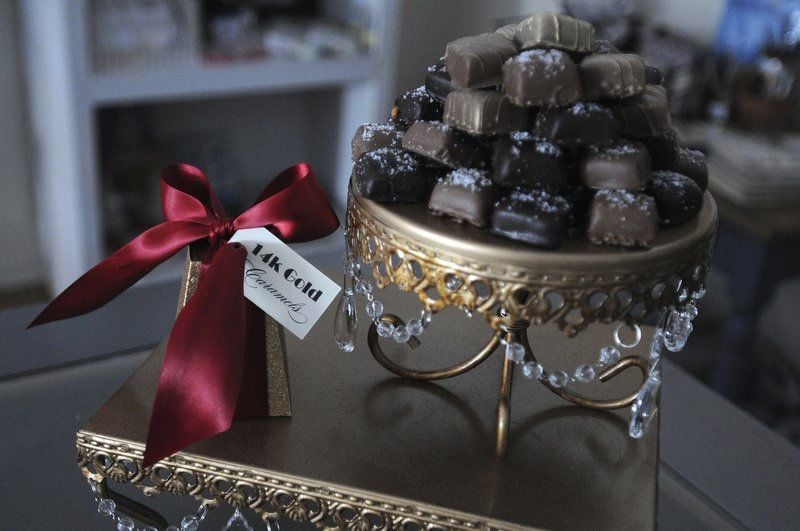 An example of the candies and the decorative box that will be given out at Oscars in Hollywood. 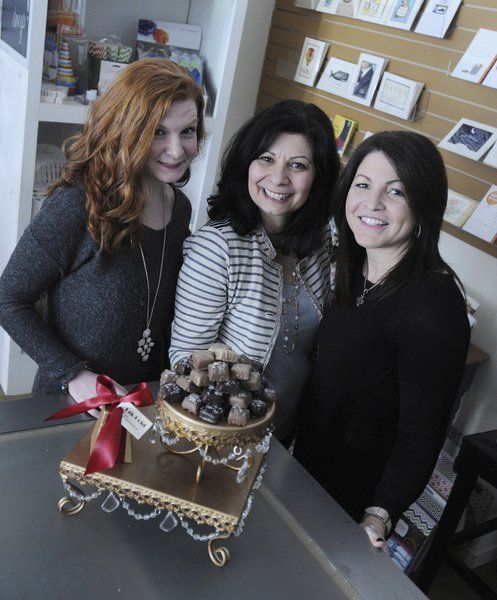 Shaunna Iannuzi, left, and Melissa DiMinico, right of The Candy Dish and Trish Martini, center of Soiree, an invitation and stationary store in Andover, Mass., teamed up with Dolby to provide candies and a decorative box for guest of the Oscars in Hollywood.

An example of the candies and the decorative box that will be given out at Oscars in Hollywood.

Shaunna Iannuzi, left, and Melissa DiMinico, right of The Candy Dish and Trish Martini, center of Soiree, an invitation and stationary store in Andover, Mass., teamed up with Dolby to provide candies and a decorative box for guest of the Oscars in Hollywood.

NORTH ANDOVER, Mass.— As Hollywood royalty descends on Los Angeles for the Academy Awards this weekend, some of the event's most important guests will receive some special treats with a little New England flavor.

When the VIP guests of Dolby Laboratories, host of the awards show, entered their hotel rooms Friday night, they received a decorated box of chocolates courtesy of The Candy Dish, a wholesale candy company owned and operated by Melissa DiMinico, a North Andover, Mass., resident, and Shauna Iannuzzi.

"We found out during Christmas week that Dolby wanted to use our product," DiMinico said. "I couldn't believe it. It was so exciting."

The Oscars have been the highlight of a somewhat whirlwind experience for the small business, which officially started in November 2013. Since then, The Candy Shop has sold its products in a variety of different restaurants and supermarkets in the state.

DiMinico and Iannuzzi, who have known each other for five years, first began working together when DiMinico, a mother of two young boys, was looking for gift bag ideas for her sons' birthday parties. Iannuzzi, who attended the Cambridge School of Culinary Arts, had worked for six years as a chocolatier in Gloucester, Mass., and offered her help.

Eventually, the duo began providing party favors for area birthday parties, weddings and baby showers. They became a licensed business, created their own website to showcase the treats and started a Facebook page.

Word quickly spread about The Candy Dish, including all the way to Los Angeles, home of one DiMinico's longtime friends, Tarrah Curtis. According to DiMinico, Curtis moved out west after college and worked for the Oscars for many years in its public relations department. She recently started her own company, T Squared Productions, and one of her clients was Dolby.

After seeing the tasty treats on The Candy Dish's website, Curtis asked DiMinico if she would be interested in providing chocolates for Dolby's VIP guests during Oscars weekend. DiMinico and Iannuzzi sent samples to Curtis in September, and in December, they received the good news: Dolby would serve their guests chocolate from The Candy Dish.

"Because of the time difference, we didn't find out until midnight," DiMinico said. "I called Shauna, and then I called and texted anyone who was awake."

"It was very exciting," Iannuzzi said. "I did not expect that."

After several weeks of hard work, the team mailed out 15 boxes to Los Angeles last week for this weekend's festivities. Each box has seven chocolates, a mix of both milk and dark, for guests to enjoy with some champagne.

The women are still in shock their treats will be enjoyed by some of Hollywood's elite.

"We have fun doing it," Iannuzzi said. "Everyday I just have to pinch myself. I have a feeling something big is going to happen in the future for us."