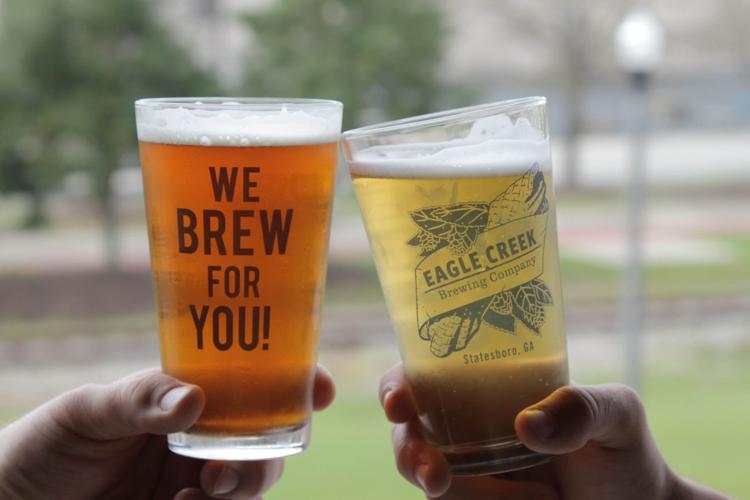 Patrons hang out at Eagle Creek Brewing Co. in Statesboro during a tour.

Patrons hang out at Eagle Creek Brewing Co. in Statesboro during a tour.

ATLANTA - Founders of the Georgia Beer Co., a proposed craft brewery in Valdosta, drafted two business plans - one if the Legislature loosened up the state’s beer law, the other if it didn't.

Even though lawmakers this session gave small brewers more flexibility, the aspiring South Georgia brewery is proceeding as if the measure failed.

"A lot of people say the bill was ‘watered down,’ but we believe that is a light way to put it,” said Chris Jones, co-owner of Georgia Beer Co. Like many wishing for more craft beer choices in Georgia, he found the proposal sweet at first taste, then bitter on the finish.

The outcome reflects state leaders' reluctance to abandon Prohibition-era rulesthat ensure a strict separation among those who make alcoholic beverages, those who distribute them, and retailers who sell them - known as the three-tier system.

When first introduced, the measure was championed as a “beer jobs” bill that would give craft brewers more ability to sell and boost the economy.

Even with Atlanta's strong craft beer scene, supporters said Georgia lags nationally and is one of only four states where breweries cannot sell directly to customers. Those sales - though limited elsewhere - can be a significant source of revenue for small breweries.

But the proposal met formidable resistance from wholesalers, who saw it as a threat to the three-tier system. They found a receptive audience with lawmakers.

Rep. Mike Cheokas, R-Americus, said the system is designed to keep the market equitable and to prevent monopolies from forming. Some, like corporations angling for exclusive rights to a particular beer, could benefit disproportionately from its demise.

Cheokas said the breweries "knew what the laws were going into it."

Currently those laws allow breweries to provide a free tasting - up to 32 ounces - toaccompany a tour of their facilities.

Brewers who open their doors to the public typically make much of their money from sales of souvenir glasses used for the tasting.

The bill on Deal's desk allows breweries – though not brew-pubs – to charge for tours and give away an additional 72 ounces - the equivalent of a six-pack - as a free, take-home souvenir.

Likewise, the state’s 16 distilleries can charge for tours, provide two additional half-ounce samples and give away a 750-milliliter bottle of spirits.

The arrangement may work more easily for breweries, said Jim Harris, president of the Georgia Distillers Association and owner of Moonrise Distillery in the Atlanta area. Distilleries would have to charge significantly more for tours to cover the cost of the freebies, he said

But Harris said he sees the bill as “a crack in the system" that creates a “path to friendlier legislation in the future."

Ultimately, he said, distilleries want what the state’s wineries have – the ability to sell bottles directly to visitors.

Even for breweries, implementing a slightly looser law that involves paid tours and free samples is complicated.

Regardless, he called the limited success in the Legislature a miracle. Eagle Creek just rolled out a new beer called Georgia Tea Party Amber - a spring seasonal whose name is meant as a tribute to the effort it took to push the bill through.

Dismuke said the changes will help increase Eagle Creek’s revenue enough to move more quickly with expansion plans. The brewery, which opened nearly two years ago, is increasing its fermentation space to bulk up its volume and serve a thirsty Atlanta market.

At least 38 breweries now operate in Georgia - many in the Atlanta area.

Outside Savannah, the only other South Georgia brewery is the Omaha Brewing Co., located just south of Columbus.

Jones, at the Georgia Beer Co., described the region as a “craft beer desert.” Eagle Creek and Georgia Beer, which plans to open by Christmas, see it as an untapped market.

To whet the region's appetite, Eagle Creek has been brewing up beverages meant to appeal to the local palate. They include a simple light blonde ale, as well as a lemon-lime hefeweizen. Braver souls can step up to a hopped-up Low Country Pale Ale.

“We see an awakening in South Georgia,” Dismuke said.

Jill Nolin covers the Statehouse for CNHI's Georgia newspapers. She can be reached at jnolin@cnhi.com.