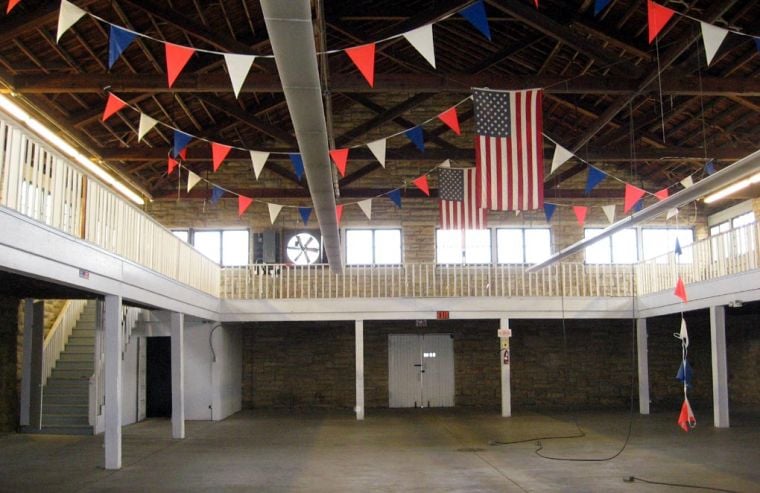 Floral Hall, or Building 31, on the Olmsted County Fairgrounds holds a lot of local history. Now a local group is in the process of trying to preserve the building.

Floral Hall, or Building 31, on the Olmsted County Fairgrounds holds a lot of local history. Now a local group is in the process of trying to preserve the building.

Its limestone structure has stood proud and strong since 1940. Through Minnesota’s harsh winters and humid summers Floral Hall at the Olmsted County Fair has been a gathering place for the young and old. Last fall however, it looked like its days were numbered. The hall (also known as building 31) was to be razed due to concerns over the structure’s soundness. That is when a group of citizens stepped in and changed the hall’s doomed fate. According to information provided by Jane Bisel, back in the 1930s the Olmsted County Fairgrounds in Rochester served as a Civilian Conservation Corps camp. The CCC was open to unmarried men between the ages of 18 and 25 who were U.S. citizens and whose fathers were unemployed. The camp offered the young men the opportunity to work, get an education and take part in a variety of leisure activities. The Work Progress Administration offered both men and women of diverse ages and educational backgrounds the opportunity to live and work in their own communities. It was the WPA that built the hall. It was originally called Floral Hall, in reference to the 1910 frame structure commissioned by Dr. Christopher Graham that it replaced. It took 40 men to construct the hall. The limestone for the building came from a quarry in Genoa. The hall also boasted a balcony that went around all the walls inside the building. The hall was built to be 110 feet by 64 feet and came with a $47,730 price tag. Once completed the hall was used to display 4-H floral exhibits and later used to showcase art in the 1950s. Since that time, the hall has served as an exhibit area for the fair, antique shows have been held there and cars and boats were stored there in the off-season to generate money. The hall like other buildings on the fairgrounds are historic in nature with many stories and sentiments attached to them. “Seven structures were either built by the WPA or CCC,” said Bisel, a member of the 31 Committee and principal of Blue Planet Museum Consulting. Even with all the history, the hall was in need of some major repairs. “There was lots of structural deficiencies,” said Tom Ryan, superintendent of Olmsted County parks. The biggest concern was “exterior fall hazards,” he said. There were pieces of the building that were falling off. It stopped being used in the fall of 2007. “County board decided to raze the building,” Ryan said. Bisel and her business partner Steve Williams went to the hall last year to attend the Gold Rush antique show and saw a notice that the building was going to be torn down. They both signed a petition trying to stop the demolition of the hall. That was the start of their journey to save the hall and their first time ever working on rescuing a building on the brink of being torn down. It was John Kruesel, a lifelong-Rochester resident who launched efforts to save the building. Soon a county subcommittee called the 31 Committee was formed. “(We) heard lots of support for building,” Bisel said. The committee convinced the county commissioners that the hall should be saved and with a vote of 7 to zero the commission decided to keep the hall. It was through the hard work and dedication of the committee that the county commissioners have now allocated $75,000 to the restoration of the hall. The money will need to be matched with outside donations to be able to be used. “Many spokes connected to this hub holding the wheel up and we need them all to build the community up,” Kruesel said. As for the committee “we regard ourselves as historians rather than preservationists,” he said. They want to hold on and remember the rich history that is contained at the Olmsted County Fairgrounds. For Kruesel, saving the hall is something that he has been working on for 15 years. He has worked to find out why the hall had fallen into such disrepair and what could be done about it. For now the hall has been stabilized and the exterior is no longer crumbling. How far they will go on restoring the hall and updating depends on the money that is raised. On what the future plans for the hall are the “sky is the limit,” Ryan said. What is known is that the dedication of a few citizens coming together for a common goal made a change for the better and by doing so, preserves this history for the next generation. This year’s Olmsted County Fair is July 28-Aug. 3. Log on to www.olmstedcountyfair.com for more information. If you are interested in donating to the Floral Hall fund, contact the Rochester Area Foundation at (507) 282-0203 or raf-info@RochesterArea.org Bisel would like to hear from any readers who were part of the CCC camp at the Olmsted County Fairgrounds. She can be contacted at jane@blueplanetlogistics.com.