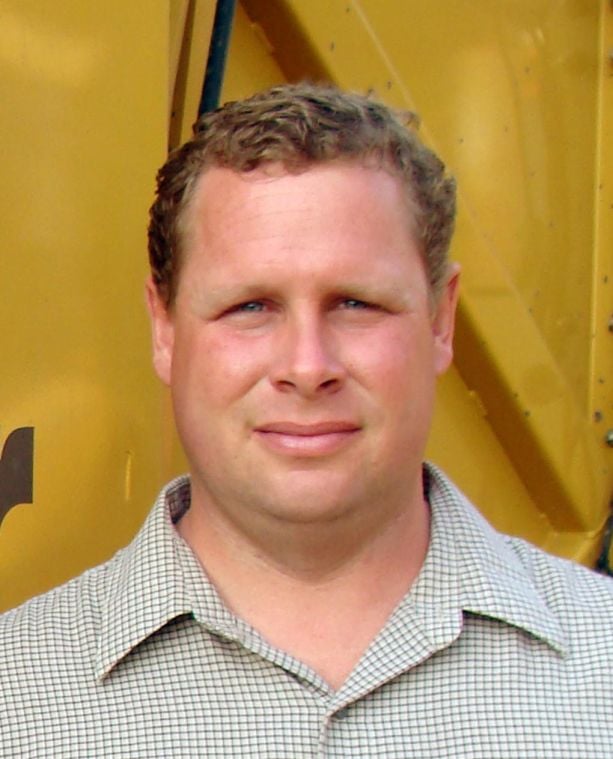 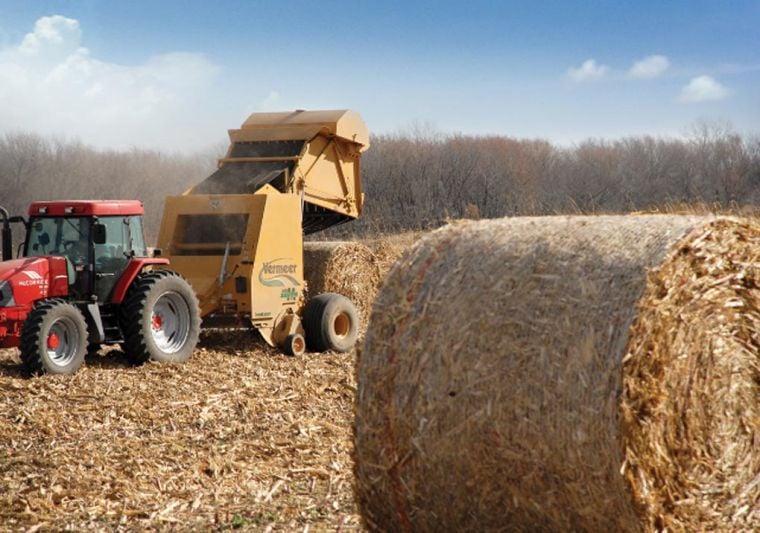 With 13 years of custom baling experience, Eric Woodford of Redwood County has the savvy to know that “just a little tweaking” on the flow of residue into his balers could make a significant impact on both quality and productivity. He runs six balers and works a six- to eight-county area from his Redwood Falls farm. Thanks to rapidly growing markets for cornstalk bales, his crew will do about 20,000 corn bales this fall plus another 5,000 soybean, wheat and grassland bales. He also noticed that he and his baling crew spent too much time outside their tractor cabs unplugging the baler pickup, especially on cornstalks. “Corn stalks just don’t handle as easily as hay. Hay will feed in just like reeling in a fishing line. But with corn stover you often have that ‘boiling effect’ with residue tumbling just ahead of the pickup. And if half of that residue is tumbling in front of the baler pickup, you’ve reduced your baler’s capacity by 50 percent,” he said. So Woodford knew there had to be a simple, yet better way to improve productivity. Today, this 37-year-old entrepreneur exudes energy and optimism thanks to those 13 years of “tweaking time” that got him experimenting with various mechanical devices to better prepare cornstalk material. He came up with what he calls a “powered windguard” that helps direct coarse and high-volume stalk material more uniformly into the bale chamber. Woodford uses the Vermeer M series balers and because he is a firm believer in the quality of Vermeer products and Vermeer people, he contacted Vermeer engineers. They liked what they saw and the result is a new Vermeer “Cornstalk Special” baler, the 605 Super M model that features Woodford’s invention. “This baler changes everything, especially when it comes to corn stalk baling,” said Vermeer Forage Solutions Products Director Joe Michaels. “We found this ‘powered windguard’ concept significantly increases the capacity of cornstalk baling. It’s a great option for the 605 Super M because this baler is a heavy-built, high-production unit designed to handle coarse material.” Turning at 300 rpm, the hydraulically powered windguard sits above and slightly ahead of the pickup, propelling stalk residue into the baler chamber before it has a chance to start tumbling. The system is also reversible if stalk material starts to plug. “In essence, we’ve taught corn stover how to behave like hay,” Woodford said. Evenly spaced, star-shaped plates clamped to the rotating powered shaft are the mechanics of this simple, yet extremely effective system. Increased capacity is the key selling point. Better bale quality may be a factor, too. Woodford said the rotating feeder bar tends to “comb” the residue going into the baler chamber resulting in a better bale with fewer “soft pockets,” which can be rain and snow traps. This gives you a bale with better storage characteristics. Important, especially to custom operators, is the likelihood that this unit also reduces “stiff neck” tendencies caused by constantly having to look back to check on the baler pickup, for tumbling, blockage, etc. “Anytime you have to stop your tractor, climb down from the tractor cab, you’re wasting time, and increasing chances for accidents,” said this veteran baler who has monitors in his tractor cabs that focus on baler shape, baler count and bales per field. So what’s the payoff? A typical baler operator should be able to get 50 more bales per day, on the same amount of fuel and the same number of hours, Woodford said. In essence you’ve made your tractor more efficient by making the baler more efficient. Using custom rates of $12.50 per 1,250-pound net-wrapped corn stalk bale, those 50 extra bales per day generate $625 additional revenue. Woodford finds his custom baling season for corn stalks averages 21 days. So that means an extra $13,125 revenue. For a skilled operator, upwards of 100 extra bales per day are doable he said. As cellulosic ethanol starts working into the renewable fuels market, he feels the big round bale will become a major feedstock. “You can put the biggest windrow that fits under your tractor and this 605 baler with this unit just swallows up the biomass. I refer to it as the ‘hungry monster’. It’s just like a vacuum cleaner the way residue feeds into the baler. I did three prototypes before ending up with the engineering that finally seemed to fit my requirements,” Woodford said. Redwood Falls hosts the Minnesota Inventor’s Congress which each year often previews new inventions that eventually work their way into the marketing world. Woodford leaned on the Congress staff for ideas on how to patent his idea, how to establish working agreements with Vermeer, and specific legal connections to help establish his new business career. Woodford’s system is now patented technology licensed exclusively to Vermeer Corp. The Vermeer Cornstalk Special 605 Super M baler is in limited production this first year. Woodford attended both Husker Harvest Days in Nebraska and the Farm Progress Show in Iowa, and said that farmers stopping at the Vermeer booth first asked “where’s this new corn stalk baler?” So apparently word is spreading among farmers and custom cutters. Listed at $53,655 retail, this Vermeer Cornstalk Special baler with the powered windguard attachment also includes a monitor and scale giving the operator individual bale weights plus total field weights. This baler produces high-density packages 30-inches to 72-inches in diameter, 61-inches wide, with a maximum bale weight of 2,400 pounds (dry). For more information log on to www.vermeerag.com or e-mail Woodford at ericmary@redred.com.