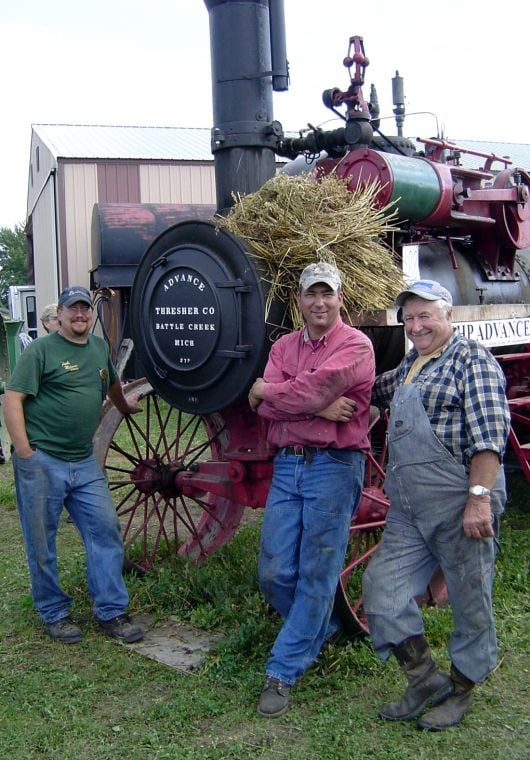 Denis Schirmers, right, enjoys displaying his 1907 steam engine that was restored by Jeff Lund, center. Schirmers' son Kevin is on the left. 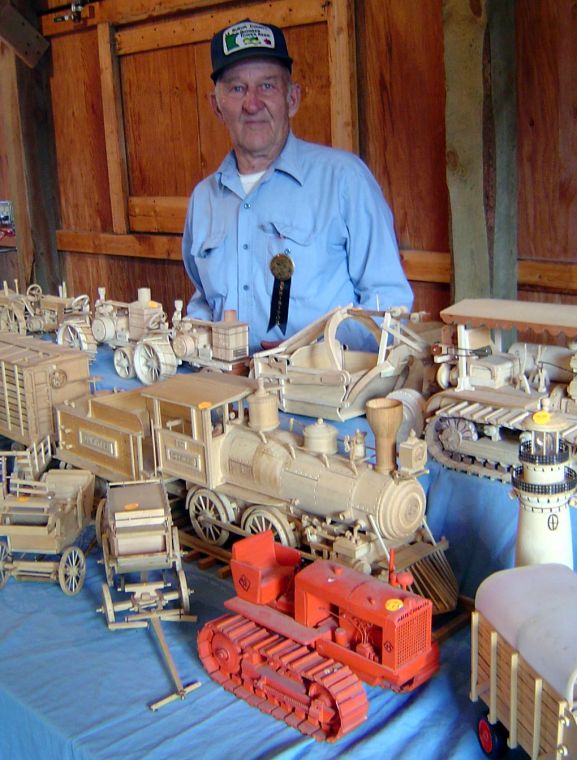 Ben Rudolph of Medford, Wis., has been making intricate, hand-made wooden models of farm machinery and other items for 60 years.

Denis Schirmers, right, enjoys displaying his 1907 steam engine that was restored by Jeff Lund, center. Schirmers' son Kevin is on the left.

Ben Rudolph of Medford, Wis., has been making intricate, hand-made wooden models of farm machinery and other items for 60 years.

When John and LouAnn Peternell started Pioneer Days in 1975, they had no idea it would grow into an event attended by about 22,000 to 26,000 spectators each year. These spectators come from across the United States and Canada as well as other countries for this celebration that re-lives the past. They see live demonstrations of threshing, lumber sawing, wool spinning, rug weaving, quilting and more. But back to the beginning. “My husband had a collection of tractors, and we wanted to share them with others,” LouAnn Peternell said. So, with the help of family, neighbors and friends, they put together the first Albany Pioneer Days threshing show. “We were hoping for maybe 500 people,” she said. “But, to our surprise about 2,000 people attended that first show.” This year’s festivities, Sept. 12-14, show how much Pioneer Days has grown. There are more than 40 buildings on about 66 acres, compared to two buildings on 26 acres when it began. The show is put on entirely by volunteers. The Stearns County Pioneer Club was formed in 1976 and is a non-profit educational organization, so all donations are tax deductible. Each year, Pioneer Days has a different focus. Past features have usually been different tractor brands like John Deere, International, Allis Chalmers and Minneapolis-Moline. One year the theme was “Minnesota made,” which included all types of equipment originating in the state. This year’s feature was vintage transportation with an assortment of cars, trucks, motorcycles, planes, trains, boats and snowmobiles from 1978 and earlier. For Sauk Centre resident Denis Schirmers and his son Kevin, Pioneer Days is a chance to display their 1907 steam engine. Restored by Jeff Lund of Lund Machine Works in New Ulm, the steam engine is believed to be the oldest running one of its kind. “I do this to relax,” Denis said. Ben Rudolph of Medford, Wis., takes vintage transportation to a smaller level. For 60 years, he has been crafting intricate, hand-made wooden models of farm machinery and other country living items. “I can pretty much make anything I want to now,” he said. In addition to vehicles and engines, Pioneer Days showcases historical traditions. The club moved an old schoolhouse, the Arban Church, the old Albany Depot and other buildings from the area to their show grounds. “We moved preserved buildings that otherwise would probably been gone,” Peternell said. At the blacksmith shop, visitors can have their name engraved on a horseshoe by Ken and MaryLou Zitur of Avon, who make their living with their own blacksmith and welding shop. Pioneer Days also gives people a chance to see how a lathe mill, shingle mill and flour mill were run. Live demonstrations include wool spinning, quilting, rug braiding and weaving, grain threshing, lumber sawing, silo filling, and corn shelling, and many more. Throughout the show there are musicians of various genres — old time, bluegrass, country-western and gospel — performed in three buildings. There is also a fiddle contest. New this year was a “Minnesota 13” moonshine display with skits, and more children’s activities, such as a treasure hunt. The rope-making machine, owned by the pioneer club, is an attraction for young and old alike, twisting fibers together to create a brightly colored, durable rope. This year, an exhibitor brought a shoelace-making machine as well. “Although attendance was slightly down this year because of the rain on Saturday and Sunday, Friday’s turnout was higher than usual, so that helped,” club secretary Lee Mortenson said. “Camping is still very popular, though, as we had more campers than ever.” “We hope to keep Pioneer Days going by getting the younger people involved. It’s a fun way to preserve the history that made our country what it is today,” she said.