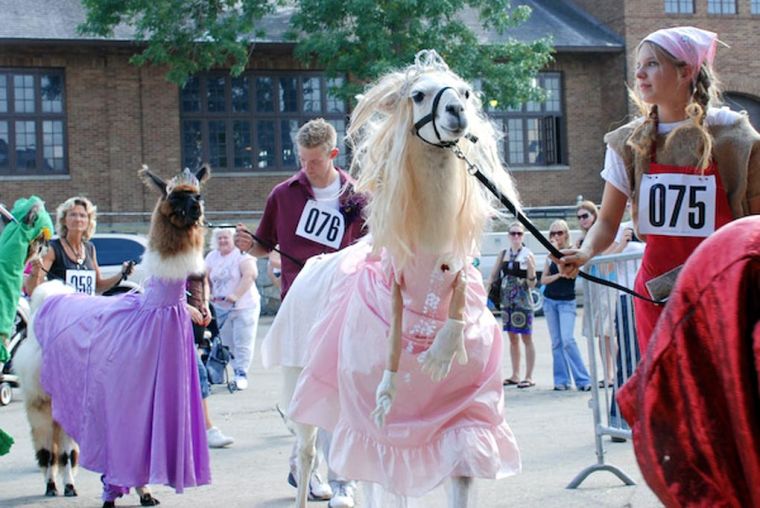 Alleigh Hemingson of Andover readies to lead her lama, Baby Doll, into the show ring for the constume class the Minnesota State Fair. 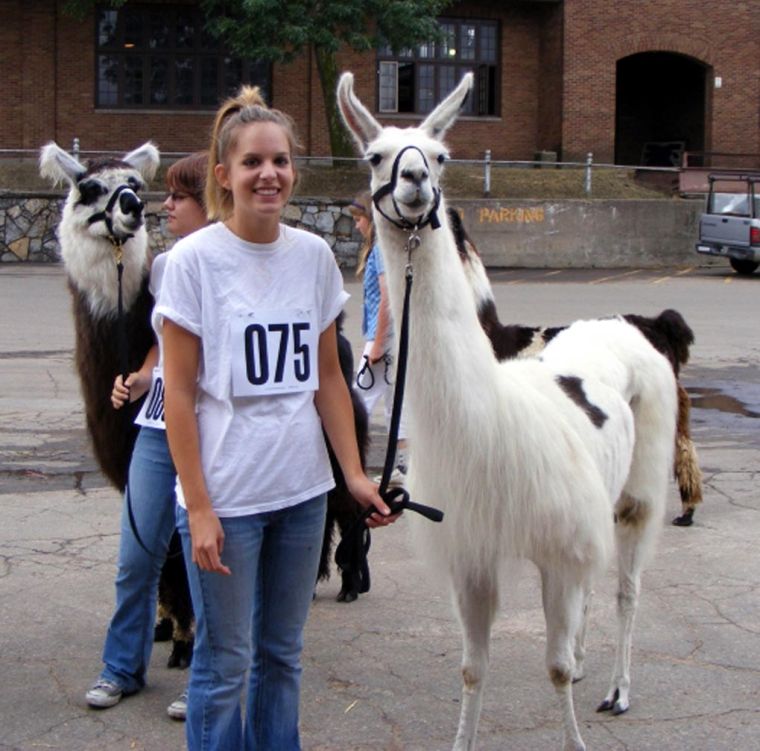 Alleigh Hemingson of Andover readies to lead her lama, Baby Doll, into the show ring for the constume class the Minnesota State Fair.

Every year 4-H’ers from across the state converge on the Minnesota State Fair for the opportunity to be recognized for the hard work they put in on their 4-H projects. This year there was a new category added to the Minnesota 4-H competition. This category featured animals that are furry, distinctive looking and like to occasionally spit. The addition of the lama category came about because “we felt like there was enough interest,” said Brad Rugg, Minnesota State Fair 4-H superintendent. Because lamas are a unique animal, four classes were developed to judge this wondrous creature: • An optional costume competition where the 4-H’er and lama are dressed in costume with some sort of theme in mind. • The showmanship class which the 4-H’er must present the lama in a showmanship ring. • A public relations class which involves the 4-H’er taking the lama through 10 different stations. These stations may include a simulated elevator and walking up to a hospital bed. This illustrates the lama’s demeanor/control in a public setting. • The obstacle course. The course includes stepping into water and walking up a teeter totter. According to Rugg, there was “already an open class lama show at the fair,” which meant that 4-H didn’t have to start from scratch but did need to add the “youth development piece.” Alpacas are also allowed to be shown in the lama category. Rugg believes the lama category is a “nice compromise to companionship projects.” With a two-year plan in place, Rugg believes that after these two years they will “set some goals and objectives.” For now they are just thrilled to have had 43 4-H’ers compete in this year’s inaugural lama competition. One of those who made their lama competition debut at the State Fair is Alleigh Hemingson of Andover. While Hemingson is no newcomer to 4-H — she is currently in her seventh year — this was her first time showing a lama at the Great Minnesota Get-together. Her lama, Derby Doll, is leased to her, but she hopes after all this lama experience she’s attained that she may someday be the proud owner of her own lama. This junior at Andover High School is no stranger to showing animals. In the past she has shown a tree frog for the small pet project and two horses. What made her take the leap to lamas? “The announcer for my horse show called me and asked if I wanted to show one of his lamas. He said they had the perfect lama for me,” Hemingson said. Her lama debut at the Anoka County Fair was also the fair’s lama category debut. So what is the difference between lamas and other companion animals? “Lamas are very different than horses,” Hemingson said. “They don’t need to be washed every single time (before showing).” She also notes that with horses sometimes you can fight back to get them to do something, you can’t do that with lamas. Lamas decide what they like and what they don’t like. Hemingson and Derby Doll participated in the optional costume class at the State Fair. The lama donned a princess costume and Hemingson dressed as her servant. She came up with the idea for the costume because Derby Doll is called “Princess” by her owners. The biggest challenge in this competition for Hemingson was the obstacle course. The best thing has been “the experience,” she said. It must have been some experience for Hemingson because she not only is going to show a lama next year, but she’s going to work with Derby Doll again. The 4-H organization evolves and changes each year to fit the needs and demands of its youth. With the addition of the lama competition, the organization seems to have found a great fit and a great challenge for students all over the state. What's in a name? Is it lama or llama? Well, it's both, kind of. The name lama refers to the genus or family. That genus includes alpacas, vicunas, guanacos and llamas. The llama, with two "l"s, is the name of the specific species of lama.