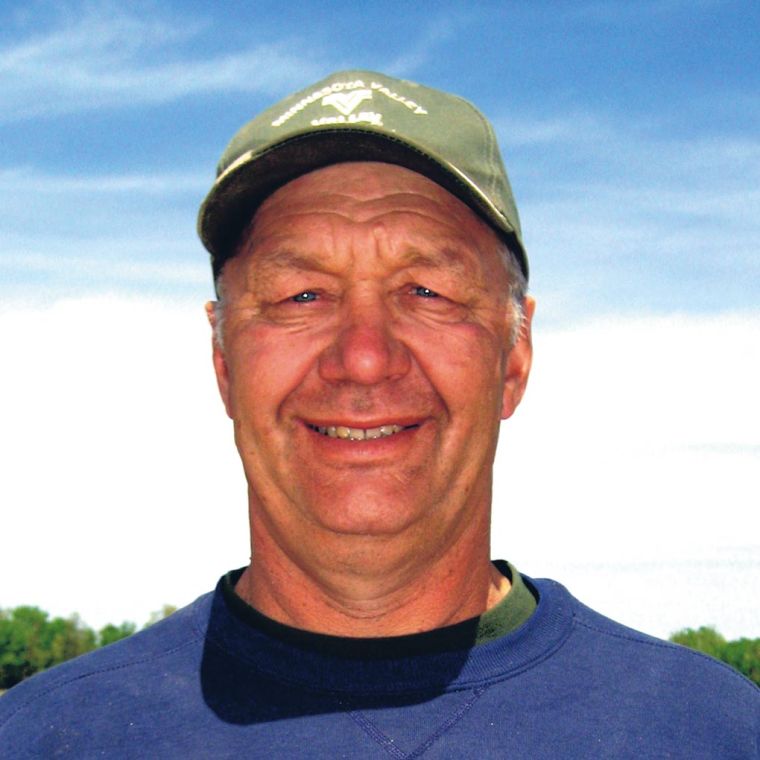 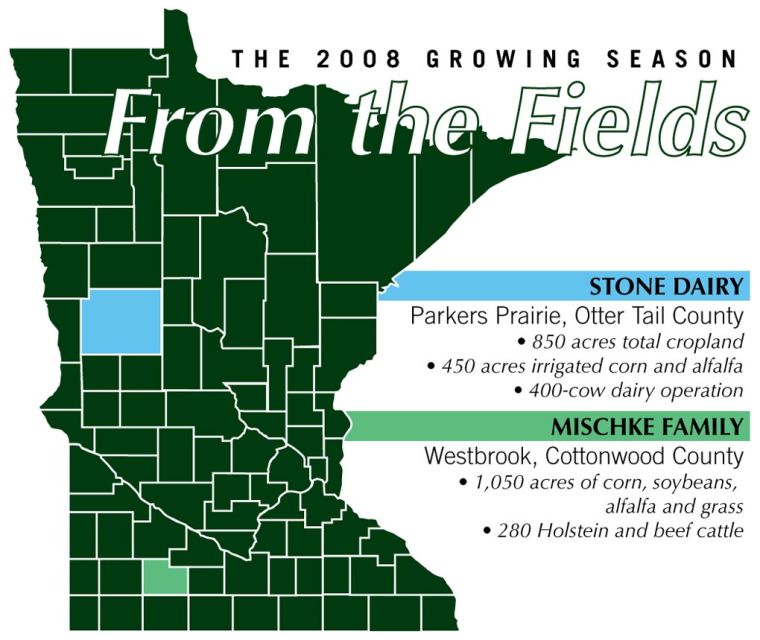 From the Fields: The 2008 Growing Season

From the Fields: The 2008 Growing Season

When contacted the evening of Oct. 27, Otter Tail County dairy producer Bruce Stone said they had just wrapped up their 2008 harvest that afternoon; high-moisture corn (about 33 percent) was ground and stored in one of their bunker silos. This was a 92-day hybrid under irrigation that did 197 bushels per acre on a dry basis. Stone said this fall has been a slow dry-down in his area so much more propane is being used to dry corn. With the 2008 cropping season now history, how does he read crop year 2009? He said it will be the most expensive one ever for Stone Dairy, a 400-cow operation with 850 acres cropland of which 450 acres is irrigated. A new center pivot may be added because dry-land corn was pretty much a bust in Otter Tail County this year. Although virtually all their cropland is fed through their dairy herd, Stone doesn’t see stronger milk prices as a way to absorb the increasing production costs of crop farming. “Milk future prices, much like grain, don’t look very encouraging,” he said. As treasurer of Minnesota Milk Producers Association, he stays tuned to the pricing of milk and dairy products. As of yet he doesn’t see higher food costs negatively impacting consumption of dairy products. “It’s just a combination of a few things, and our tightening economy is likely a factor. But markets right now are difficult,” Stone said. “Exports had been strong but as our dollar gets stronger, that hurts exports. You really don’t know who’s in and who’s out, which makes you wonder if there isn’t some ‘game playing’ going on.” He sees the next few months as uncertain ones for dairy farmers, and perhaps for consumers, too, since cheese and milk prices at the retail level continue to bounce around. He wonders if these pricing variations are mostly just a marketing game where both processors and retailers “… are trying to make an extra buck, sometimes at the expense of both we milk producers and the customers buying our products.” The latest American Farm Bureau Federation’s Market Basket Survey showed the average price for a half-gallon of regular whole milk was $2.57, while a half-gallon of milk labeled “rBST-free” was $3.44, and a half-gallon of organic milk was $3.71. Stone said there is little organic dairying in their part of Minnesota explaining, “We’re a long ways from the market.” He reads and hears of organic dairying continuing to grow but wonders if some of this is mostly conversation wrapped around the “magic words” of environmentally friendly. His take on the country of origin labeling program implemented Sept. 30 is simply this: “Does the consumer really care?” He said some producers think COOL can make a difference in marketing if/when consumers start using country of origin as a factor in their purchasing decisions. “I hope that’s true because the American farmer, whether he’s dairy, beef, hogs or other production, really does produce superior quality. In the dairy lineup, most of the imported products are various cheeses that we don’t produce.” COOL does mean some new record keeping for dairy farmers. For example dairy farmers will have to certify that animals in their possession were born and raised in the United States before they can sell them. This likely means electronic button ear tags to provide customers, and ultimately consumers, the proper COOL documentation. Stone thinks MMPA meetings this winter will likely focus on both the shrinking consumer food dollar and the impact of COOL. “We’re already noticing cheese sales to restaurants (are) down slightly, as is the sale of premium beef cuts. So people are evidently eating out less.” Reflecting on 2008, Stone said it’s been a good year for their farming and dairy business, saying milk prices stayed “pretty strong.” Despite the late-summer drought, crop production was good, particularly their irrigated cropland. They had three cuttings on their alfalfa crop this year, except for one field that produced four cuts and had enough re-growth to suggest a possible fifth cutting. Steady milk production, a good barometer of overall management strategies, stays right at 79 pounds per cow daily basis on their three-times-per-day milking schedule. “We’re OK at this level. (Son) Ryan is the nutrition guy for our operation. He sometimes tries some minor tweaking of the ration if it affects feed costs, or even a little bump in production. But overall there’s little change from week to week or month to month.” The bottom line: “It’s been a good year and we’ll do our best to make 2009 just as good, or even better.”